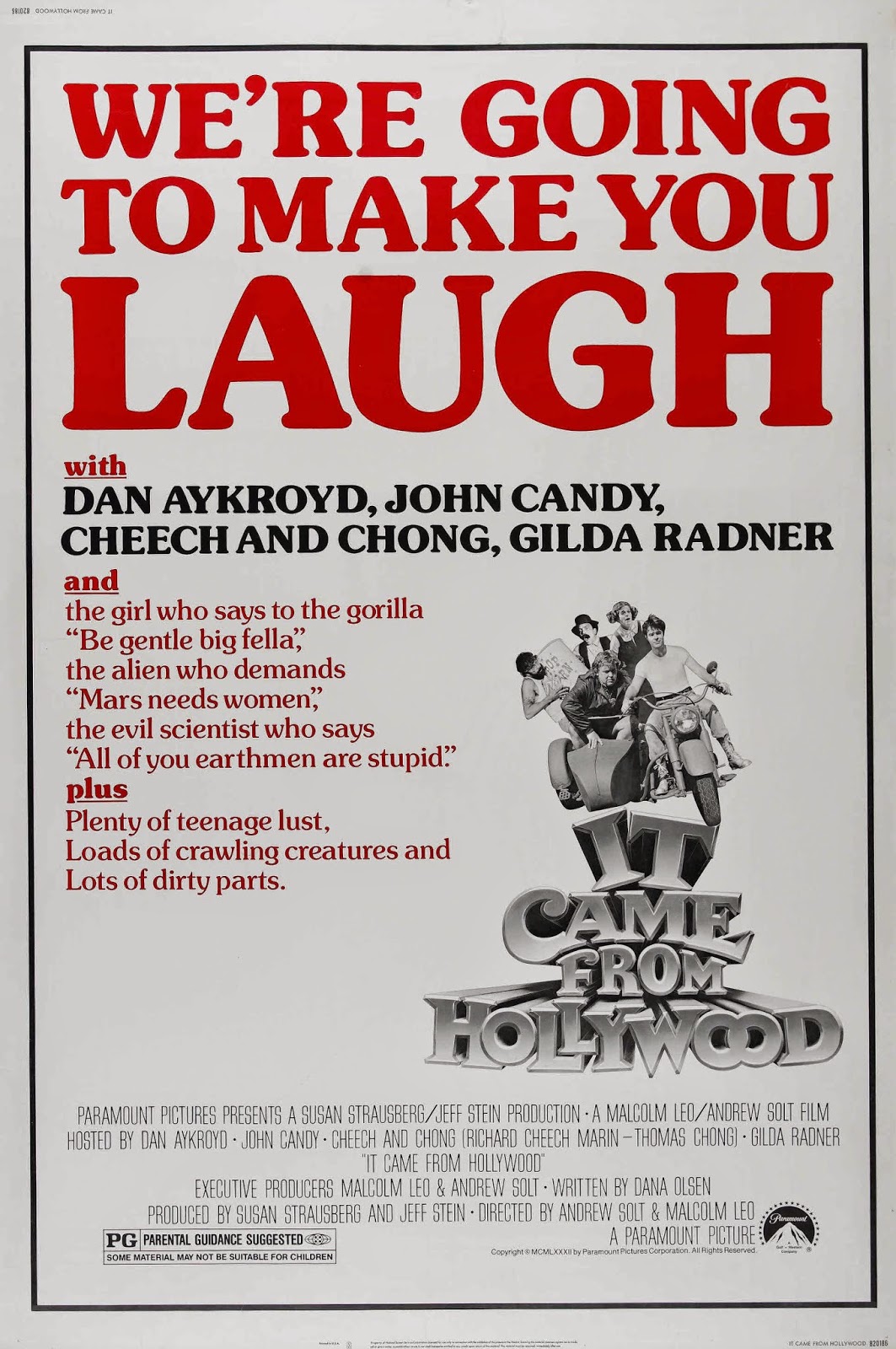 Well, can you even believe it! Here was I, Burl, visiting the Value Village with a few friends some weeks ago when I come across a VHS copy of It Came From Hollywood! Yes, that’s another one of those That’s Entertainment-style clipshows, like Terror in the Aisles or even Famous T&A; but this is one I remember watching more than once with my pals a way long time ago!
What I don’t remember is why we’d have watched this more than once! Ha ha, I guess it was the plentiful clips and the comedy guest stars! Yes, instead of, say, spookmeisters like Donald Pleasance, Cameron Mitchell or Elvira, here we have a bevy of chortlesmiths, including Dan “The Great Outdoors” Aykroyd, John “The Silent Partner” Candy, Gilda “Haunted Honeymoon” Radner, and Cheech and Chong, the well-known stoners from After Hours! These entities appear in weakly-written sketches, but save stronger material for their sardonic voiceover jibes! Some of these are funny, ha ha, but the sketches almost never are!
Oh sure, Gilda Radner plays her little girl character Emily for some of it, but as talented as she was, I never cared much for that little girl! (Still, Emily provides the best moment of the movie, a voiceover bit I thought was gutbustingly uproarious when I was young, and still think is pretty amusing!) Aykroyd does a bit that presages his role in Dragnet! And there’s a tender moment between Aykroyd and Candy during the Ed Wood tribute section! But, while I hate to sound overly critical, mostly these sketches just waste everybody’s time!
As for the clips, most of the usual suspects show up: Wood’s work, The Giant Claw, The Creeping Terror, Robot Monster, Reefer Madness! Ha ha, these are all bad pictures! But then we get The War of the Worlds, The Day the Earth Stood Still, Creature From the Black Lagoon, The Incredible Shrinking Man and other fine pictures! What are these doing here? It’s kind of nice to see them, though – they’re little islands in a swampy sea of trash, which might without respite become unbearable before the picture’s 80 minute running time is up! So maybe that’s the purpose of including good movies in there, ha ha! I can’t quite say!
Anyway, it’s a clip show, pretty well edited and possibly the slickest of the 80s bunch of them! (Only Terror in the Aisles gives it a run there!) The inclusion of good movies is off-putting whatever the motive, and whatever the psycho-emotional dangers of not doing so! And, the natural charms of their enactors notwithstanding, those sketches are a heavy debit! Altogether I’m going to have to give It Came From Hollywood one and a half little pals!
Posted by Burl at 10:37