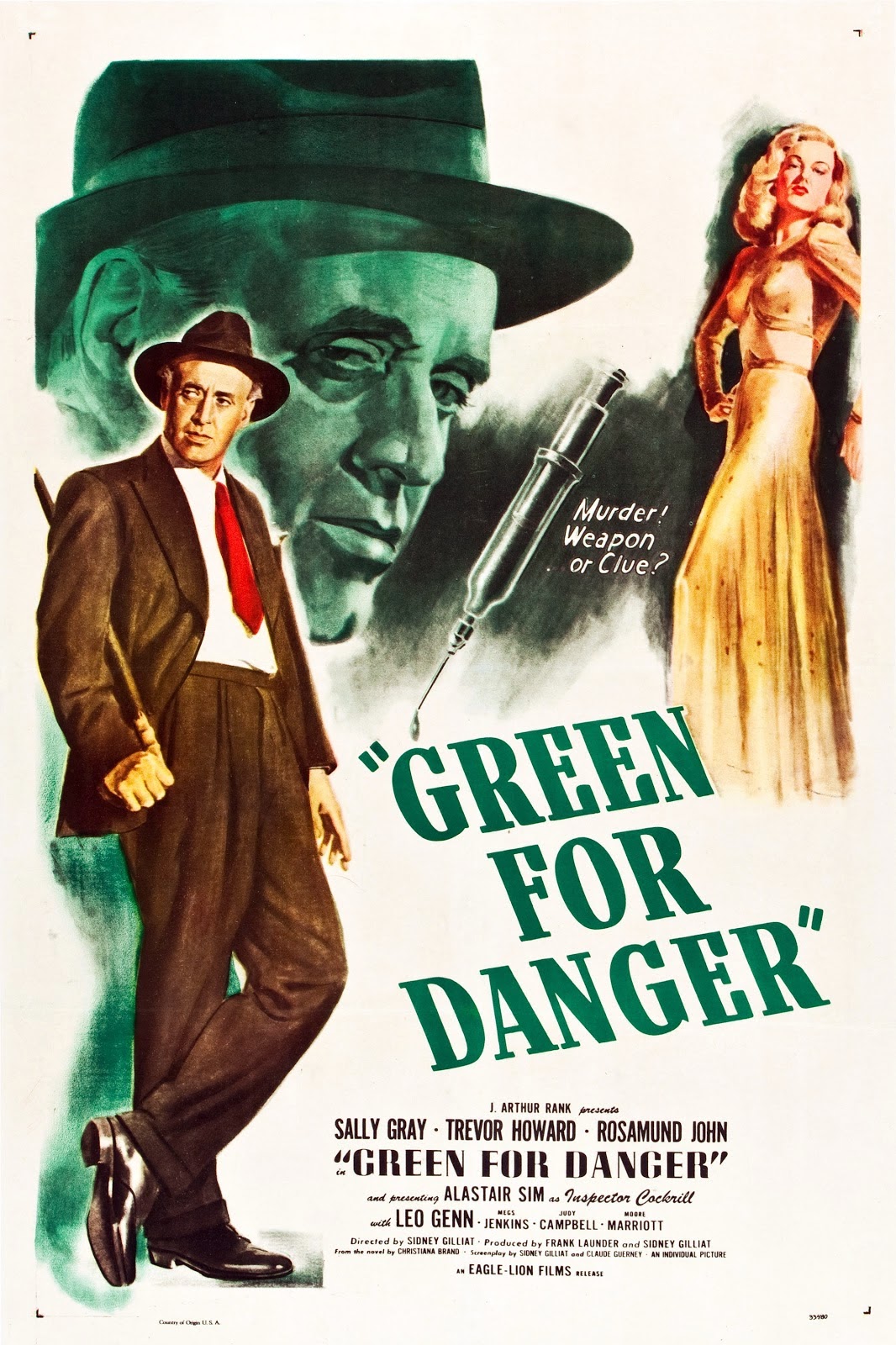 A-ha ha, it’s Burl, here to review an English country house mystery story – with a difference! Here the English country house has been requisitioned and repurposed as a hospital “in the emergency of war,” and the mystery is set during the Blitz, with bombs falling unpredictably here and there! And the suspects are all doctors and nurses, ha ha!
The film in question is called Green For Danger, and it’s a terrific pickler of a picture, filled with marvelous voices and entertaining performances, and beautiful inky-black photography and cracking dialogue! The performance I most enjoyed was that of Alastair Sim, playing the detective on the case, Inspector Cockerill, “of Scotland Yard, I’m afraid,” who was also given the best dialogue!
The story tells, in one long, virtually uninterrupted flashback, of a murder done one August day in 1944, when doodlebugs were raining out of the skies and jury-rigged hospitals in expropriated manor houses dotted the land! The victim is a postman, who dies in an operation, and when a lovestruck theatre sister declares his death anything but an accident, she herself is summarily slaughtered in a scene that would not have been out of place in a Brian De Palma picture! Clearly, Inspector Cockerill tells us, the perpetrator is one of the five other people present in the operating room the morning of the postman’s death!
Inspector Cockerill goes about his investigation with an hilarious indelicacy! Sim tries a little physical comedy too, some one-man knockabout, but mainly relies on his marvelous staccato delivery and his constant knowing grin! It’s a highly entertaining performance! Surrounding him, the suspects, are a gallery of good actors, like Leo “Endless Night” Genn, playing a self-satisfied cocksman, and Trevor Howard from Von Ryan’s Express as the tetchy anesthesiologist! There’s a marvelous portly nurse with a marvelous voice, played by the marvelously named Megs Jenkins!
If you think the idea of a murder mystery set in wartime is an interesting idea, well, ha ha, you’re right, and this movie sure won’t disappoint! There was maybe a shade too much soap opera for my liking, and I was unable to perceive Leo Genn as a sex*al object pursued by multitudes, and the ending has some implausiblities involving a hypodermic, and I thought being called ‘sister’ meant you were a nun (or Pam Grier), but I guess not; but those are all small quibbles! It was overall a real cinder-burner!
And again, the best of all is Sim! Take it from me, you’ll be wishing there was a whole series of Inspector Cockerill films, even if his name makes him sound like a character in a high school VD film! I give Green For Danger three and a half resignation letters!
Posted by Burl at 23:20