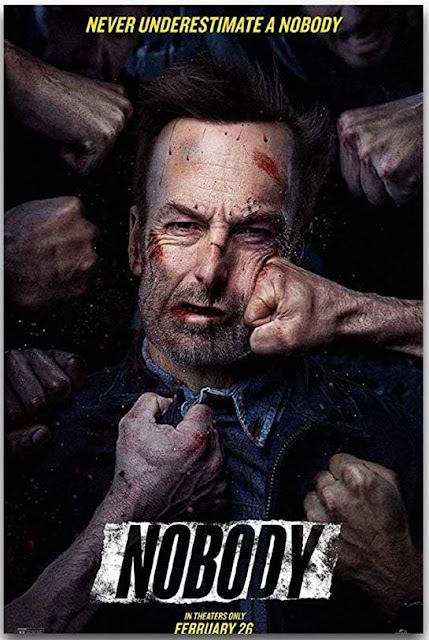 Ha ha and headbutts, it’s Burl! Yes, it’s time for another review, and this time I’m reviewing more old man action for you! As if Taken 2 and Rambo: Last Blood were not enough, here we have the story of a family man who used to be a man of violence in his role as an… what was it, adjuster? accountant? actuary? Anyway, some kind of killer for the C.I.A. with a boring-job nickname for whatever reason! The picture is quite simply called Nobody!

Now what this picture is, is the “fun” version of A History of Violence! And I say “fun” despite the scenes of a downtrodden ironworks executive cowering, while at work, from his in-laws and his bosses, who are one and the same, and later lying prone on his bed at night, separated from his disinterested wife by a wall of pillows! Don’t worry, his passion for mayhem will be reawakened soon enough! (Oh, and I should say right here that his father-in-law is played by Michael Ironside from Scanners!)

The fellow’s name is Hutch, and he’s played by comedysman Bob Odenkirk, who spent 2021 playing against type in pictures like this and Halloween Kills, in which he played a miniature role! Connie Nielsen from Rushmore plays his distant, disaffected wife, who spends a good chunk of the movie cowering in the basement with the couple’s teenage son and young daughter! It all kicks off when a couple of housebreakers invade Hutch’s house and steal his watch and a handful of cash, and put a bopping on the teenage son! Hutch has a chance to bean them with a golf club, but instead sends them on their way!

Of course as a result of this soft-out, his family believe him to be nothing better than a paisley mandanfield; but little do they know the incident has given him the thirst for violence! He seeks out and retrieves his watch from the robbers, then happens into a clash with a gang of drunken Russian louts posessing little sense of either civility or bus ridership! Ha ha, Hutch pounds them all (getting well tenderized himself in the process), and thus earns the enmity of crime baron Yulian, played by Aleksey Serebryakov from Fartsa, whose brother or cousin or something was one of the beatees! In fact Hutch has not merely roughed this relation up, he’s roughed him up to death!

Yulia commands a gang of course - that brand of gangster who in movies are often seen in track suits with gold chains hanging about their necks, ha ha, and so the movie is almost as Eastern Promises as it is A History of Violence - and they find Hutch's name by inspecting his dropped bus pass! There’s a home invasion scene which ends in more victims; a car crash; a kidnapping; a car chase; and finally the big showdown at the tool and die factory! Here Hutch receives some last-act help from his old hangdog dad played by Christopher Lloyd from Buckaroo Banzai and Track 29, and his stepbrother, a sniper played by the RZA from Ghost Dog and The Dead Don’t Die; and thanks to them and the Home Alone traps Hutch has earlier set, a lot of Russian gangsters are shot, exploded, or run through with rebar!

Ha ha, that’s a throwback move, isn’t it, the rebar impalement! It seems very 80s or early 90s to me, and indeed, the whole movie has that same spirit! As a mechanism for providing a cathartic jolt to middle-aged schlubs who fantasize about violent vengeance against imaginary wrongdoers, it’s finely-honed, ha ha! As a story with any real depth or subtextual provender, I found it wanting! Of course once he becomes a hyper-violent killer his wife rediscovers her ardor for hubbo, who for his part admits that in his transformation from soulless killer to middle-class doormat, he might have overcorrected! But there’s no investigation of these human aspects, no challenging of them, no real way of excavating a theme from the thing!

It’s an enjoyable bit of melba toast and cheese for a’ that! The actors all do good work, and I was pleased to see J-Rod in the role of the bus driver! I would also add that it’s clear from watching the picture that whoever purchased the set dressing did an exemplary job! It’s a bonbon and no mistake, but I give Nobody two and a half stock shots of some other city!
Posted by Burl at 23:03