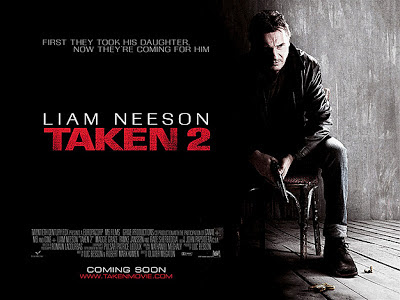 Hi, Burl here with a review of a movie I just watched and can already barely recall, as though it was shown to me by Red Chinese hypnoscientists and requires a playing card to trigger any memory of it! I think it was called Taken 2, and I believe it was the sequel to an earlier picture, which I believe I’ve also seen, called Taken! Both of these are ideal airplane fare, and that’s exactly where I watched this one, ha ha!
If memory serves, the original picture starred Liam Neeson as a special superspy whose daughter is “taken” by Albanian slave traders! (“Kidnapped” is a word never used in these movies; it’s always “taken,” which never fails to sound kind of dumb to me!) Neeson must track the takers all through Paris, and he lays quite a biffing upon these hapless Albanians when he catches them!
The sequel is briefly interesting in that the story features the friends and relatives of the original Albanians seeking revenge upon Neeson while he’s in Istanbul! The new Albanians, who are not themselves slave traders, are just upset that their sons/fathers/brothers/uncles/what-have-you were punched, kicked and electrocuted by Neeson rather than simply taken to the police, and, moral blind spots notwithstanding – they don’t care what crimes their kinfolk may have committed, so they claim – it’s hard not to see their point!
But pretty quickly they stop being a group of vengeful bereaved and start acting more like your garden-variety Eastern European criminal organization! Of course there are more takening attempts, and this time it’s Neeson and his ex-wife who are taken, and the daughter, who doesn’t even have her driver’s license, who must attempt to save them! This leads to a pretty clever scene in which she tosses grenades around Istanbul (which nobody seems to notice, ha ha!) so that a head-bagged Neeson can triangulate his location!
There are a few car chases and a number of violence fights, and eventually Neeson faces down the grief-stricken father who is at the center of the revenge shenanigans, and who is played by the exact guy you would expect to play such a role! This fellow assures Neeson and the audience that he has a few other sons of his own, who will definitely come after Neeson and therefore assure a Taken 3! Ha ha, when will these Albanians learn! More to the point, when will this American family learn, as the takeaway from their foreign experiences is clearly meant to be “Ha ha, never leave America!”
The movie is mostly dumb and inconsequential, with a few okay action scenes, but not as many as you’d think; and, like a few other pictures I’ve seen lately, it seems to be missing a proper third act, or at least a proper transition between the second act and third! This leaves you with the feeling of having watched an episode of television rather than a proper movie! And a lot of time is wasted on the family drama, which really gets tiresome! Even at the requisite “Neeson’s Bar-b-que buddies” scene, that’s all they talk about!
‘Tis a silly movie, and it would have been a lot more interesting had it worked more strenuously to knock Neeson off his moral high ground! Failing that, some stronger action scenes would have been nice! But as it is, I’ll be happy to give Taken 2 one and a half cell phone foot stompings!
Posted by Burl at 20:57