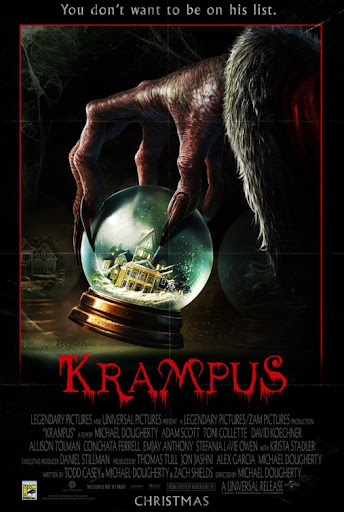 Ha ha ha, merry Christmas! Yes, it’s Burl, and of course we’re well into the Christmas movie season, and I’ve already watched a number of the usual suspects this month: Gremlins, Christmas Vacation, A Christmas Story, Die Hard, so forth! But I also watched one that was new to me: a little PG-13 horror dingle-dangle called Krampus! Now, I know there’s a little cottage industry of direct-to-video Krampus pictures out there, but the one I’m talking about is the relatively big-budget one that came from the director of Trick ‘r Treat! As mentioned, it’s a PG-13, so rather than having the Krampus rip people’s heads off or stick them with icicles, the picture features a family besieged by an army of demonic toys like some kind of unimaginably slick Full Moon movie! Ha ha!

Charles Band could only dream of a cast of mildly recognizable faces such as Krampus has on offer! Adam Scott from Our Idiot Brother and Who Loves the Sun is Tom, the dad, and Toni Collette from Fright Night and The Way Way Back is Sarah, the mom; they have two kids, a younger boy called Max and a teenage girl named Beth, and Tom’s German-speaking mother is there to make traditional Bavarian treats! As in Christmas Vacation, the homestyle holiday is interrupted by the arrival of a gang of downmarket relations, including David Koechner from Dirty Work as Howard, the gun-crazed über-American slaphead, plus his wife and three kids (a pair of tomboy bullies, a baby, and a pre-teen dunderklumpen who never says a word), and the grouchy lush Aunt Dorothy, played by Conchata Ferrell from For Keeps?

Young Max is so upset by these goofs that he rips up his letter to Santa and sends it flying to the four winds! This act alone is sufficient to conjure up the Krampus, a horned and hoofed demon who leaps from rooftop to rooftop and employs random tactics to harass the un-festive! Homicidal gingerbread men, humongous toothy jack-in-the-boxes, dirty elves borrowed from Icelandic mythology: all this and more eventually shows up to bedevil this extended family! Ha ha! Omi knows what’s going on, because as a girl, back in the old country, she had a run-in with the Krampus! Kids start disappearing, either into the uncanny blizzard that has the family trapped, or up the chimney, or in the cavernous attic!

Max, who started it all with his Santa-ripping shenanigans, is more or less our hero, but the ending leaves the efficacy of his heroics in question! Ha ha, the whole last act seems kind of piecemeal, and this stands in contrast to the first part of the movie, which concentrates on being a sort of family Christmas comedy, almost entirely sans horreur! I thought this was a good decision, ha ha, and it would have been an even better decision had the affrights, when they do come, been more effective! But they’re not, particularly, and nor are the comedic parts particularly uproarious!

There are some rewarding moments, though, and the performances are good, and I liked the opening scene with the slow-motion shopping frenzy, even if that has very little to do with anything! It’s no seasonal classic, but it was enjoyable enough counter-Christmas programming to watch with the family by the fire! An R rated version might have been more fun, but this was perfectly fine as it was! I give Krampus two and a half vinartertas!