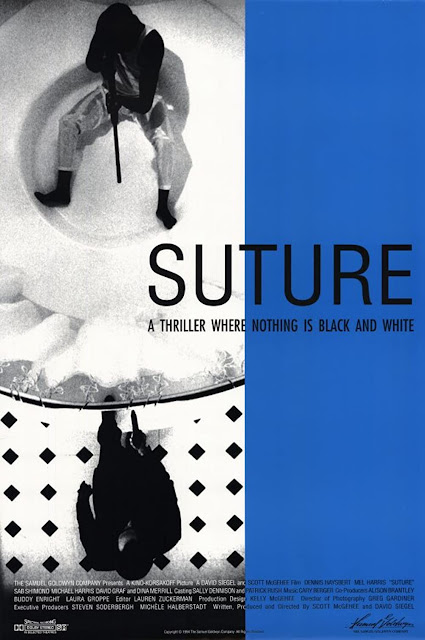 All for the love of monochrome, it’s Burl, here to review one of the genre/arthouse gems of the 1990s! Ha ha, actually, this sort of thing was perhaps not as au courant in the 90s as we citizens of the future believe it to have been! I know that’s probably a confusing statement, so I’ll clarify by giving an example! Movies like, say, The Daytrippers, ha ha: that was the sort of thing people went to the arthouses to see back in those days! Movies like this one, Suture, counted more as oddball curiosities!

But it’s an attractive oddball, that’s for sure! It was shot in a widescreen black and white format, which is one of my favourites! The images are very composed and frequently striking, and the black-and-whiteness is in fact part and parcel of the movie’s larger themes! And of course some say that the style and pictorial elegance either overwhelms any meat the film might have, or intentionally serves to disguise that there isn’t much meat at all! Ha ha, well, let’s see for ourselves!

The picture opens with the arrival of a man named Clay in Phoenix, Arizona, where he meets his estranged brother Vincent who looks just like him! Except Clay, a friendly and decent fellow, is black - he’s played by Dennis Haysbert from Heat and Absolute Power - while cold, distant Vincent, played by Michael Harris from Satan’s Princess, has a resemblance to Nick Cave if he were more prissy and ratlike! We soon realize that this disconnect between what we see and what the characters see is simply one of the movie’s affectations - there’s no narrative payoff to this!

Vincent is very rich, the more so thanks to the recent murder-death of his (and Clay’s) father! But Vincent is a suspect in this murder, so his plan is to blow Clay up by use of radio-phone, then use their startling resemblance to each other to assume Clay’s life while inheriting their father's money! But Clay survives the explosion, though both his mug and his brain panel are damaged, and he must undergo facial reconstruction surgery at the hands of the rather too-obviously named Dr. Renée Descartes, played by Mel Harris from Wanted: Dead of Alive and another twins thriller, Raising Cain!

Much of the middle act is Clay receiving this therapy and becoming comfortable with the identity of Vincent! Ha ha, of course he has amnesia, so he believes he’s Vincent because everybody tells him he is! His psychiatrist Dr. Shinoda, played by Sab Shimono from Gung Ho and Blind Date, takes a liking to him and helps him along, and soon Dr. Descartes takes a shine to him too! Meanwhile Vincent’s friend and lawyer, Alice, an older lady played by Dina Merrill from The Player, nurses a longstanding crush on him and tries to kindle his affections! Is it because he’s very rich? No, Alice seems sincere in her reserved ardour! And also meanwhile, a cop played by David Graf from Police Academy investigates Vincent’s part in the murder of the father, along with the connected but non-fatal shooting of an old housekeeper played by Fran Ryan from The Sure Thing and Quiet Cool! And of course the third act will see the return of the real Vincent, prissily teed off that his initial murder attempt didn’t work!

So it’s got some Hitchcockian thriller elements to it, and some psychological mystery bits, as when Clay relates his dreams of transforming into a car to Dr. Shinoda (shades of Spellbound, speaking of Hitch!); but mostly it seems to be a somewhat inchoate meditation on self identity and so forth! The situation is so contrived and the film's reality so artificial that it also serves as a commentary on the relationship between art and truth! But while it clearly has more in its sporran than simple suspense-thrills, there remains nevertheless a slight feeling of “Hmph, so that’s it?” when the thing is done! And yet I can’t call it unsatisfying!

No, for me the solid acting, confident direction, gleaming widescreen black-and-white photography rendered it a perfectly enjoyable viewing experience! I might have liked it better back in 1993 when I saw the movie at a late and much-mourned rep cinema in my town that used to bring in all manner of terrific movies, and spiced up the experience with a mobile of model jet planes that had been hung in front of the screen! Ha ha! They also for some reason had a model airplane mounted on the wall in a frame! Anyway, they screened Suture back in the day, I enjoyed it, and now that I’ve watched it again I’m going to give it three party hats!

Email ThisBlogThis!Share to TwitterShare to FacebookShare to Pinterest
Labels: 1990s, mystery, oddball, saw it on the big screen