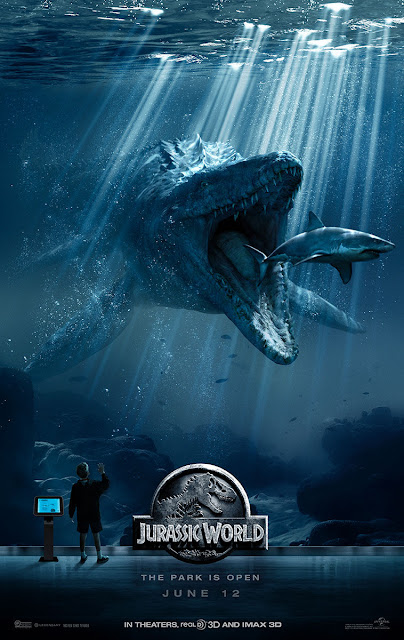 Groww, groww, it’s Burl here with a review of the dinosaur picture! Yes, this is the newest one in the dinosaur series we all thought had closed up shop with Jurassic Park III, but this one, they tells us, is called Jurassic World!
Ha ha, and that title raises all sorts of possibilities: have the dinosaurs upended the food chain and somehow reclaimed the world? No, they haven’t: it’s just the same island theme park from the first one! However, it’s now operational, which affords the filmmakers plenty of opportunities to give it a When Time Ran Out-style old-fashioned disaster movie build-up, which they mostly miss, and for chomping scenes, which they largely take! Ha ha, plenty of splattering pasta sauce in this picture!
The plot is a kind of suck-pit of silliness, I’m sorry to say! Ha ha! There’s a parade of highly unlikely “attraction” scenes, such as the one with the giant dino-croc thing, the people kayaking serenely past stegosaurs (after all, hippos, just as herbaceous, drown anyone who tries to swim with them!), and of course the big bird dome made apparently of spun sugar!
Chris Pratt, who was in Guardians of the Galaxy, plays the highly generic Hero In Khaki, and a complete screenplay construction is played by Bryce Dallas Howard! Have I got that name right? Ha ha, and there are a couple of kids, brothers actually, who perform their functions well! The little one especially is good at looking sad and scared! The bad guy is Vincent D’Onofrio from Full Metal Jacket and The First Turn-On, and his badguyness is pretty rote, I have to say, and there’s not much old Vincent can do about it! (I’d like to have seen Vincent Price in the role, frankly! Ha ha!)
I liked some of the trick effects, and also the scene in which the two kids explore the ruins of the main building from the original! That seemed like a comment on the increasing speed of, shall we say, chrono-cultural turnover: today’s kids who are looking at our detritus already qualify as archeologists, or at least feel like they do! Those kids pushing aside the spider webs in the old Jurassic Park complex and dusting off “When Dinosaurs Ruled the Earth” banners may just as well be flipping through Dad’s old record collection, wondering what these round black things are and what “Pavement” was! Ha ha!
But this hint of subtext was brief, and then things returned to the general entertainment of dino attacks and so forth, with a few bits of humour aimed at corporate branding, the unreasonable demands of audiences, and so forth! Welcome stuff, but it’s spread pretty thin! The things about it that work do work well enough, but there’s nothing all that memorable about it! Ha ha! I’m going to give Jurassic World one and a half bird feet!
Posted by Burl at 00:22