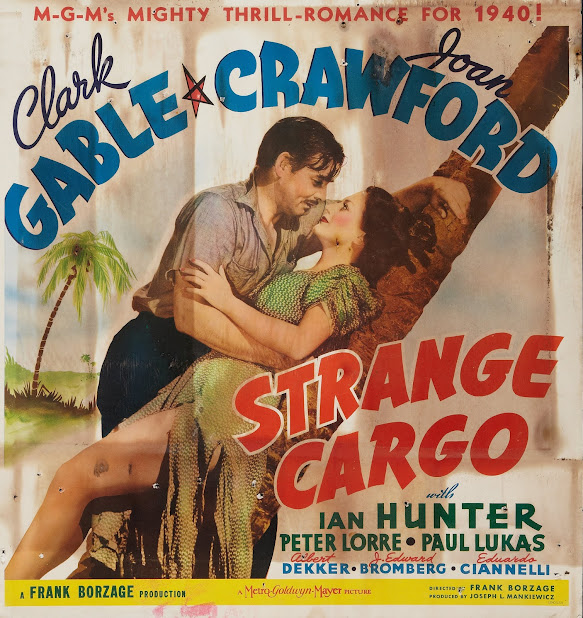 That’s right, it’s Burl, baby! Ha ha, yes, I’d like to review a very odd drama, and for those who watch this picture and say to themselves, “Ha ha, that was certainly strange,” well, just remember that you were warned! The picture is after all entitled Strange Cargo!

It’s a Devil’s Island story, naturally, like Papillon! Clark Gable and Joan Crawford, who’d appeared together a whole bunch of pictures before this, including Love on the Run, are the stars, with Gable as an escape-obsessed prisoner and Crawford as a local prostitute! They both have pretty hard lives and are ready to leave the area, but there are all sorts of obstacles! Gable not only has to break out of the jail, negotiate the jungle and cross the water, but he has trouble with the other prisoners too, one of whom, a fellow called Moll who’s played by Albert Dekker from Kiss Me Deadly and The Wild Bunch, goes so far as to bonk Gable on the head with a shoe! One doesn't weep too hard for him though, because Gable's playing a real jerk here!

Crawford, for her part, has repeated run-ins with the slimy Mr. Pig, played by Peter Lorre from My Favorite Brunette! Ha ha, I always like seeing Lorre in a movie, and this is the sort of part he could do with his eyes shut tight! He’s good, though! And so is Dekker, and also Paul Lukas, from Grumpy and 20,000 Leagues Beneath the Sea, playing another prisoner, a Mr. Suavetoast who likes to first marry and then kill rich old ladies!

It all revolves around a group escape attempt, but the bone-deep oddness of this movie comes to the fore with the introduction of a character called Cambreau, played by Ian Hunter, who of course played The Man From Toronto! Cambreau is, right from the start, a Christ figure, preternaturally calm and always right about everything, who encourages his fellow escapees to seek redemption as they die during the jungle trek and long, windless sea voyage! Ha ha! Gable, however, steadfastly resists the Jesusness, figuring that he’s well beyond absolution, until the end when he can resist it no longer! By the last few scenes in the picture, director Handsome Frank Borzage is laying it on pretty thick, putting Hunter’s character in the sea with his arms spread out Christ-like across a piece of flotsam, while a lame fisherman informs Gable, who’s now going full Barabbas, that he is the only one who can save the floundering deity!

All of this goes well beyond allegory and into the sort of Bible stories that would become popular in later decades, like The Greatest Story Ever Told and The Ten Commandments and The Robe and of course John Huston’s picture The Bible! But the weirdness is that this movie still believes itself to be an allegory and not a literal Bible story transposed to the modern day! However, ha ha, I don’t hold that against the picture! In fact, all the oddness attendant with this concept, and the self-delusion required to carry it off is, as ever, a mark in the movie’s favour! And it’s well-acted and well-directed, and features an exotic location, and is altogether unusual! I enjoyed this crazy thing and feel that it lived up to its title! I give Strange Cargo three torn strips of dress-cloth!
Posted by Burl at 21:50