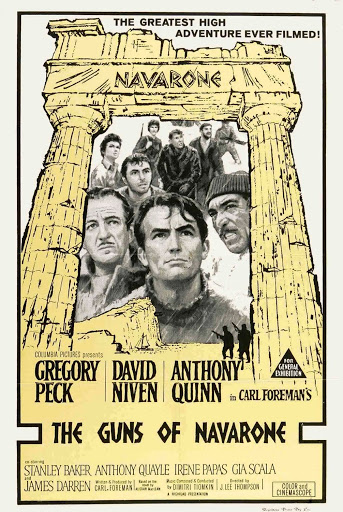 Like a false Englishman it’s Burl, here with a review for you! It’s a World War II picture today, a purely fictional one, but a reasonably thrilling and involving tale of derring-do nevertheless! Yes, I’m here to tell you now about the big-budget Columbia Pictures British-American superproduction The Guns of Navarone!
Ha ha, you’ve probably heard of this one! It was a big hit in its day, with a multinational cast of stars and a solid hook on which to hang its story! We start with Gregory Peck from Spellbound, arriving on a plane to meet up with the jolly-looking James Robertson Justice! Ha ha, now there’s an actor I’d like to see more of! Anyway, the mission is to destroy two giant guns the Nazis have set up in the Aegean Sea so that a British flotilla is able to sail past and rescue a couple of thousand stranded soldiers! Ha ha, David Niven from Murder By Death, Anthony Quinn from The Last Action Hero, Anthony Quayle, Stanley Baker, and Moondoggie himself, James Darren, make up the rest of the commando brigade!
The urgency of the mission, the near-impossibility of it (enhanced by the assumption by chief planner Justice that it is impossible), and the consequences should it fail, are set out with great clarity in the early part of the picture! From there it’s a series of suspenseful near-misses and daredevil cliffclimbing actions and bursts of gunfire and unfortunate setbacks! Ha ha, it truly seems like an ill-fated venture for the sextet, even after they meet up with two lady members of the Greek Resistance, doughty Irene Papas and beautiful, mute Gia Scala!
Perhaps to offset the presentation of wartime as a grand, if risky, boys’ adventure story, there is plenty of dialogue about the ethics of doing this or that ruthless action on behalf of the greater good! Ha ha, there’s perhaps a bit too much of it, in fact, though I appreciate the general anti-war sentiment that is the cumulative effect of these often heated discussions! And you didn’t often see Peck shout and bluster and wave his gun around, but by the last act, wracked with guilt and uncertainty, that’s what he’s doing all right!
A curious thing about Peck’s character: he’s supposed to be an Englishman, but Peck makes no attempt whatever to put on an accent or use English phraseology! Ha ha, this lack of limey jargon could be because the script was written by American screenwriter/producer Carl Foreman, then fresh off the blacklist! In any case, I spent most of the movie assuming Peck was supposed to be a visiting American, and I assume many other viewers assumed the same!
In the end, The Guns of Navarone is nothing more than a solid Hollywood product with pretty fair trick effects (though the cliffclimbing scene is pretty obviously just the actors flat on their bellies!) and some noble intentions! It’s thoroughly middlebrow, reasonably entertaining, and fun to pair up with something like 10 to Midnight or Happy Birthday To Me, which came from the same director, J. Lee Thompson! The big guns at the end are a little creepy, but impressive; and it’s satisfying to see the Nazis who’ve been running the things get blown to flinders! Ha ha! I give The Guns of Navarone two and a half surprise popout seagulls!