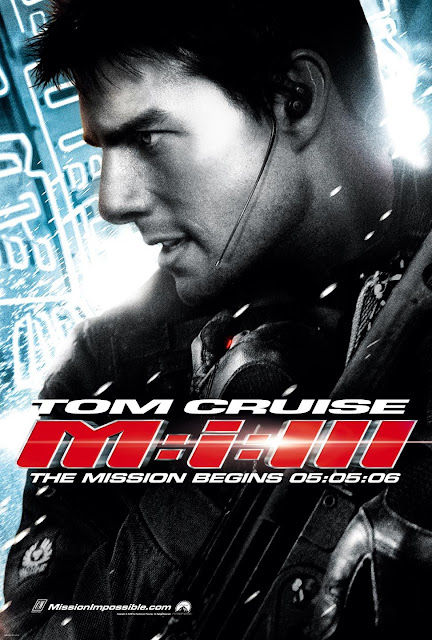 Burl here, and please take note that this review will not self-destruct in five seconds, or ever, I hope! Ha ha! Anyway, it’s one of the Mission Impossible pictures I’m talking about today, and that’s a series of movies I appreciate, even if I haven’t seen them all (and even if I don’t remember a thing about 2, even though I saw it in the theatre)! They’re very slightly old-fashioned, like the Bond movies; all the globetrotting spy stuff I guess; and even if the difference between them and any other blockhead franchise is slight, it also must be critical! Whatever that fine line is, I’m firmly on one side of it! I’d go see one of these, but, ha ha, you'd never catch me at a Transformers picture! I mean, by garr, I have standards!
With all that out of the way, I’ll tell you that I’m reviewing Mission Impossible III, which I had never seen previously! The name J.J. Abrams didn’t mean anything to me, as I’m not a TV man, and I still get him confused with the other one, Joss Whedon! I know one of them did Super 8 and a new Star Wars and the other does super-hero pictures like The Avengers!
Anyway, it was J.J. Abrams made this one, and as a series of action scenes, it’s not bad! But it’s not very memorable either! Ha ha, I recall that Tom "Jack Reacher" Cruise’s spy character, Ethan Hunt, is now merely a teacher instead of an active agent, and he’s married to a lady he can’t stop grinning broadly at (Michelle Monaghan from Due Date), and hosts parties for guests who also receive his constant thousand-watt grin – and surely some of the extras found it creepy – and all of this he does under the fake identity of a humble traffic-tally man!
I also remember that a lady gets a little bomb in her brain, and that the bad guy behind it all is played pretty effectively by Philip Seymour Hoffman, the fellow who made and appeared in Jack Goes Boating! But g*sh darn it if I can recall what the kerfuffling is about! Hoffman’s character is some kind of international arms dealer, and he wants to do something… was it blow up the world? I can’t recall, ha ha, and remember, I just saw this picture a short while ago!
Anyway, there’s an exciting helicopter chase, and Hoffman is hung out the bottom of a jet plane, and then there’s a great deal of destruction on a bridge when Hoffman is freed from imprisonment by his gangster buddies! Ha ha, that’s a pretty thrilling scene too, I guess! It suffers a bit from that jumpy camerawork and unbalanced fluorescent look we saw so much of in the mid-oughts, and it really works hard to achieve some kind of gravity! But, ha ha, always remember that this is a movie in which people can appear to be completely different and specific human beings by the simple application of a rubber mask!
Just about any plot twist is easily achievable by the application of a completely convincing rubber mask, and so that’s exactly what we get: just about any plot twist! I must admit that Tom Cruise is perfectly good in his role when he's meant to be an actionman, but in those scenes at the beginning of the picture, when he’s supposed to be a normal human hosting a party, he’s just so weird! He goes around spouting traffic statistics, reading people’s lips and grinning like an absolute lunatic! No wonder he’s happy, after some rote protestations, to get back in the action and square off with Hoffman! (Ha ha, to reach any parity, the final fight between the two requires Cruise to become ridiculously impaired by various injuries as well as by the bomb that’s been implanted in his brain now!)
There's an entertaining supporting cast (Simon Pegg from Paul, Laurence Fishburne from Death Wish II, Eddie Marsan from Sherlock Holmes: A Game of Shadows, and more) Ha ha, I’ll have to see the two newer entries of this series, because the word is they’re better than this one! Mission Impossible III was acceptable popcorntainment, but nothing more, and I award it one and a half rubber masks!
Posted by Burl at 10:05