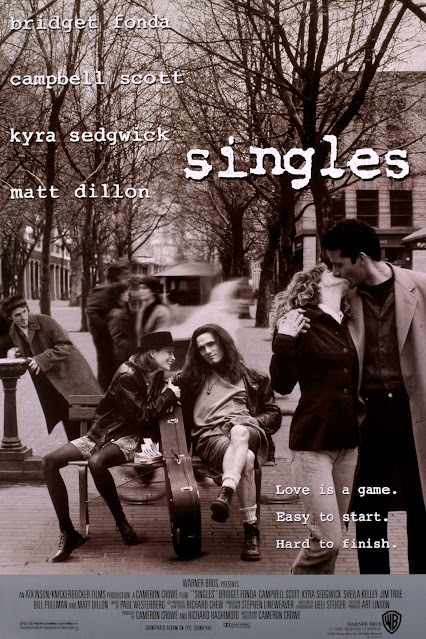 Hello, hello, hello, how low, it’s Burl, rocking out Seattle-style! Ha ha, I’m here to review a movie that grapples with the lovelives of the youth while exploring the musical culture they enjoy, and it all comes from the fellow who wrote The Wild Life! You know what movie I’m talking about, because it is and could only be Singles!

Ha ha, Singles! Yes, though I’m a little younger than the characters were meant to be in the picture (and a lot younger than the actors who played them, ha ha), I went to see the movie in the theatre because it was marketed as a Movie Of Our Times if you were in your early twenties, as I was! I mean, one look at the poster with its black-and-white imagery and its typewriter font tells you how documentary-accurate the movie intends to be! Of course it’s a music-oriented picture set in Seattle just as the grungy Seattle sound wave was breaking over the world, but the picture was shot well before the big Pearl Jam or Nirvana records were released! So at the very least, one can’t accuse the movie of being a coattail rider as much as one can the marketing!

Anyway, to the picture itself: it’s an ensemble affair detailing the romantic travails of a group of young, or anyway young-ish, Seattlites who mostly all live in the same Melrose Place-type apartment complex! For some reason the most boring and square of these characters get the most screen time: we have Kyra Sedgwick from Tai-Pan as a lady disappointed in love and Campbell Scott from The Daytrippers and Top of the Food Chain as a man looking for love, and the dull or contrived ups and downs of their relationship provide one of the picture’s major through-lines!

Slightly more interesting but more pathetic too are a would-be couple played by Bridget Fonda from Single White Female and Army of Darkness, and Matt Dillon, well known from Target; she’s a mousy fount of neediness while he’s a longhaired grungerocker with far less talent than he supposes, even though he’s backed by members of Pearl Jam! Sheila Kelley from Staying Together and Jim True from The Hudsucker Proxy play ancillary characters in this mutually orbiting gang, who frequently show up at the café Dillon and Fonda work at to serve as comedy relief from the romantic comedy; while Bill Pullman from Ruthless People and The Serpent and the Rainbow plays a boob enlargement doctor who briefly seems as though he’s going to become part of the story but never does; and James Le Gros from Phantasm II is a sensitive ponytail guy perpetually in the background because he’s so boring that even the boring characters find him boring!

These people go to shows at which bands like Alice in Chains are playing, or sit in their apartments discussing their problems with the camera, and they go to cafés and work in their office jobs, and sometimes they wear shirts with band or record label names on them to demonstrate how tuned in they are! There’s also a repeating gag involving remote control garage door openers - yes, the young peoples’ favourite! Ha ha, that’s pretty uncool, man!

There are some clever and amusing moments and there's some nostalgia value, and also some grafted-on peccadillos like the camera chats or the intertitles that pop up like book chapters and don’t really add much to the story or the themes! And I suppose the major theme is Love Is Hard In This Day And Age, and that rings true since I was that age back in that day, and love indeed was hard! But that was because we were all idiots, and speaking frankly, so are these people! I don’t begrudge them that, and I don’t begrudge Cameron Crowe for writing them that way, I just object having to watch it! And of course I don’t have to watch it, do I! Ha ha! Still, I did, first in the dollar theatre and then again on VHS the other night, so go figure! I suppose it did bring me back to those days in a strange way, but it really just brought me back to the experience of seeing Singles for the first time, probably with my friend Mary, and not liking it very much then either! In fact I was so offended by this and by its cousin-in-triteness Reality Bites that I made my own rebuttal feature film in response! Ha ha, that showed 'em! I give Singles one tucked-in band shirt!
Posted by Burl at 23:52

Email ThisBlogThis!Share to TwitterShare to FacebookShare to Pinterest
Labels: 1990s, comedy, coming of age, romance, saw it on the big screen