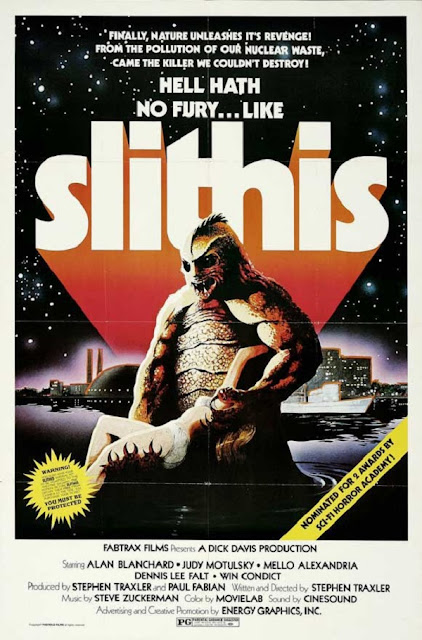 Ha ha and boogle-boogle, it’s Burl, here to review low-budget monster mania! Like Bog, Terror in the Swamp, Curse of the Swamp Creature, The Monster of Piedras Blancas, Demon of Paradise, Humanoids From the Deep, so forth, it’s yet another regional rip-off of Creature From the Black Lagoon, though the region in question is the Venice neighbourhood in Los Angeles! The movie is sometimes called Spawn of the Slithis, but I know it simply as Slithis!

In a preview of tempos to come, the picture opens with a scene involving two children playing Frisbee in slow motion! They discover a mutilated doggy and run off, and this poor hound, it turns out, is only the inaugural victim of a portly fiend soon to become known as the Slithis! The people of Venice, the hippies and stewbums and freaks and goodtime weirdos, are increasingly alarmed as the murders continue, and one fellow in particular, a local science teacher called Wayne, takes it upon himself to find out what’s going on!

Wayne is married to a lady called Jeff, and they have a pal known as Dr. John, who’s a combo hippie/nerd and one of those general-purpose utility scientists you find in pictures like this! Wayne goes off and talks to the local hobos about the neighbourhood monster problem, and irritates the scraggly-looking police chief with his theories! Ha ha, the chief is wildly overplayed by Hy Pike from Hollywood High, Vamp, Hack-O-Lantern and, can you believe it, Blade Runner, and his performance gives the picture some extra entertainment value, if not verisimilitude!

Meanwhile the creature continues his depredations, including a fine scene where he makes a lunch of a boat-dwelling 70s swinger guy! But this is no ordinary swampy like the Creature or his offspring: this, according to Dr. John, and to a nuclear scientist with a casserole face whom they consult, is apparently a monster formed of living mud that has been zapped by radiation! Ha ha! Wayne recruits a fisherman/diver played by Mello Alexandria in another entertaining performance and they spend a good ten minutes of screen time searching for mud samples!

The monster attacks are entertaining, and I enjoyed eccentrics such as Dr. John and the skindiver guy, but most everything else in the movie - Wayne’s investigations, the endless chat, the pointless digressions -  seems as slow as a turtle race, and then the next thing you know, bam, they show us an actual turtle race! There’s pep here and there, but a lot more of it would have been appreciated! And in the bargain, the picture features the worst monster-vision ever, and remember - I’ve seen Bog! Ha ha!

On the other hand we get some good stuff swirled in there too, like a few observational moments accurately depicting how the cops would react to monster attacks, by hassling and rousting members of society’s lowest echelon! There are some well-mounted shots and random moments of effectiveness salted in as well! Wayne’s investigations and the 70s TV movie-style credits font give the impression of a fan-made tribute to Kolchak: The Night Stalker, and you can take this observation as neither criticism nor endorsement! If you like your low-budget monster movies, as I do, you’ve simply got to see it no matter what! Ha ha, I give Slithis one and a half turtle flags!