Ha ha! I reviewed this twice by accident! Here are both reviews, starting with Review 1: 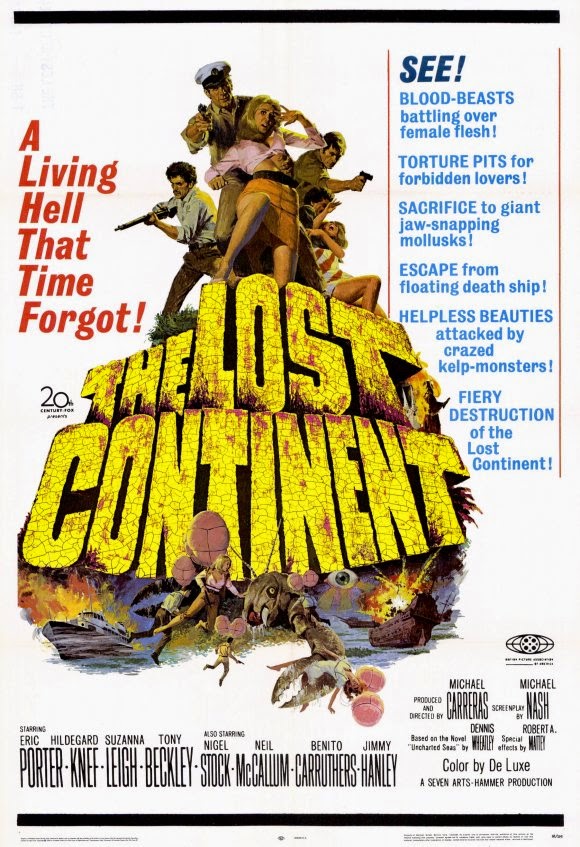 Que pasa, es Burl! Ha ha, I’m here to review a real samolean of a motion picture, the 1968 Hammer Films quandary The Lost Continent! This is such an oddball movie that I’m not sure how to even begin talking about it, ha ha!
Probably the best place to begin is the theme song, which sounds like a parody version of what a theme song to a movie like this would be! It’s a louche, loungy number, sung in a confessional tone that suggests we all, at one time or another, have found ourselves trapped on a lost continent! Not metaphorically, either, ha ha!
Anyway, it’s a great way to start off this picture! It’s a boat film and also, like Casablanca and Wages of Fear, a motley-gang-of-stateless-fugitives picture, two microgenres I’m fond of! The boat, leaving Africa and bound for Caracas, is captained by grumpy Eric Porter, well-known from Hands of the Ripper, and all of its passengers have voluminous backstories that would take too long to detail here! Suffice it to say they’re all desperate, and many of them are outright criminals!
Well, turns out the boat is carrying a bunch of explosives which blow up on contact with water, and wouldn’t you know it, there’s a hole in the side of the boat and a hurricane coming just as they’re about to enter the mysterious Sargasso Sea! Naturally there’s a mutiny – the crew is led by the great Michael “The Reptile” Ripper, who really ought to have played the bartender instead so he could get more screen time, ha ha – and after some fighting and action and a damp night in a lifeboat, our captain, the passengers and a few loyal crew find themselves back on the ship, but trapped in voracious, man-eating seaweed, which is apparently the continent of the title!
And of course that brings us to the true heart of this picture: monster attacks! Ha ha, the seaweed is bad enough, but then up pops a giant octopus creature, which grabs and gobbles up a weird moustacheman; and then we have a giant crab creature with the most grotesque chitter-chatter mouth you could ever imagine! It grabs an unfortunate guy in its claws, then fights a giant scorpion! And of course we have the band of Spanish conquistadors, ruled by a teenager and a guy in a funny hat, who toss their enemies into a pit that contains nothing but a horrible chomping mouth, sort of a mini-Sarlacc! All of these beasties were created by Robert Mattey, who, having made the squid in 20,000 Leagues Under the Sea, and who would go on to make the shark in Jaws, knows a bit about seamonster creation!
The conquistadors and all the other people stuck on this floating seaweed patch used shoulder-balloons to walk around without getting sucked down, and I must say that’s every bit as absurd-looking as it sounds! But in a picture as absurd as this, it fits in nicely!
I like a good goofnugget from time to time, and this one fit the bill! So what if it’s silly, so what if it has a little more soap opera than I would like, and seems stuck in the weeds as much as the freighter it’s set upon! Ha ha, it’s still a more adult version of those Doug McClure fantasy pictures that came along a decade later, and that counts for a lot in old Burl’s crazy book! I enjoyed this picture, and would like to give The Lost Continent two and a half shoulder balloons!
Now here's Review 2! 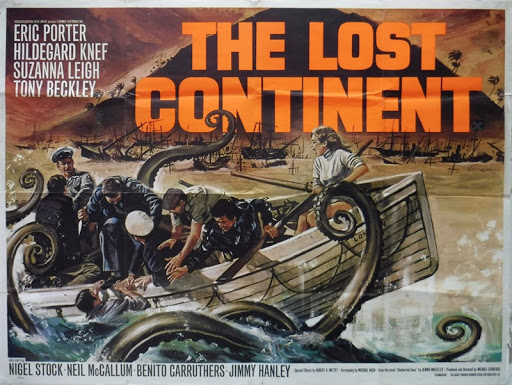 By all the seaweed, it’s Burl, here to tell you about a strange movie of swampy proportions! It’s a Hammer picture, but you’ll look in vain for Dracula or the Frankenstein! No, the creatures here are of a more fanciful nature, and we don’t find them in the mountains of Carpathia or the castles of old Austria! No, we find those bizarre monsters on… The Lost Continent!

Now the first thing we should clarify here is that we’re not talking about a continent, but more of a small atoll connected by a huge floating patch of carnivorous seaweed! Ha ha! Now, with that out of the way, here’s the story - and it’s a pretty simple one! We’re aboard a small ship of fools, which flees a North African port on its way to Venezuela! Everyone on board has a solid reason for not wanting to be in Africa any more, as they’re a collection of unfortunates, ne’er-do-wells, dipsomaniacs and complainers!

Eric Porter from Hands of the Ripper is Captain Lansen, desperate to keep his old tub afloat; the most prominent passenger, meanwhile, is played in a key of sad regret by Hildegard Knef from Fedora! The rest of the passengers and crew are a collection of famous British film faces, including Suzanna Leigh from The Deadly Bees and Lust for a Vampire as an oversexed heiress; Nigel Stock from The Great Escape and Young Sherlock Holmes as the doctor/father she hates; Tony Beckley from Revenge of the Pink Panther and When A Stranger Calls as the perpetual drinker who sobers up and does a 360-degree personality change; James Cossins from The Horror of Frankenstein and The Man With the Golden Gun as the chief engineer; and of course Hammer staple Michael Ripper from The Reptile and Curse of the Mummy’s Tomb and so many others!

For quite a while this motley gang sails, argues, drinks, fights, and loves, but the discovery of dozens of barrels of high explosive triggered by contact with water causes some consternation, and the lifeboat flight of most of the crew! Then the boat is mired in seaweed and the captain and his passengers become aware that a strange civilization of conquistadors, led by a teenager called El Supremo, who is in turn controlled by a guy in KKK headwear, want to take their supplies and feed them to monsters!

Yes, monsters! After the interminable soap-opera lead-up, the last half hour of the picture is all biting seaweed and Aiiii, scungelli! A creature that seems to be all mouth lives in the conquistador’s bilge; a tentacle beast steals away a creepy moustacheman; and the insufferably chipper bartender finally loses his jollity when he’s grabbed by a large biting crab! Ha ha! I have to say, these disgusting monsters really captured my heart, and they were built by none other than Robert A. Mattey, who went on from this experience to build the equally convincing shark in Jaws!

Ha ha, this is a weird movie, and seems a bore here and there, but redeems itself with the monster parade of the last third! The acting is earnest, the theme song ridiculous and wonderful (it would fit well on a mix tape with the song from The Green Slime), and the photography is colourful and lurid, if frequently too reliant on clouds of bilious fog for its atmosphere! I declare The Lost Continent a bad film that’s very much worth watching, and I award it two shoulder balloons!