Burl reviews The Sword and the Sorcerer! (1982) 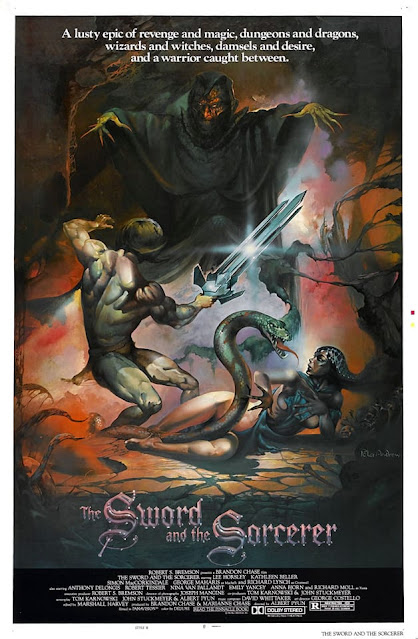 Hi, it’s Burl here, with a review of a movie in the sword and sorcery genre! How can I be sure it’s in that genre? Ha ha, because it’s called The Sword & the Sorcerer! This was one of the many movies that came out after Conan the Barbarian and Excalibur were so popular – in fact, I think this was one of the first of those muscle-bound, fur-booted low-budget cape-riders!

It was made by a Hawaiian guy named Albert Pyun, who went on to become the director of crazy movies like Dollman, Dangerously Close, Alien from L.A. and Down Twisted! This was his first picture, I believe, after spending time in Japan as a P.A. on some Akira Kurosawa movies! You’d think that would stand him in pretty good stead for a barbarian picture – you’d expect, maybe, rigorously worked out themes of honor, betrayal and redemption through bloodshed, matched and enhanced by sweeping visuals that pit man against a brutal and unforgiving landscape – but frankly, in this one, as in all the other Pyun movies I've seen, the Kurosawa influence is hard to detect!

Matt Houston himself, which is to say Lee Horsley from Django Unchained, plays the unlikely hero of this enterprise, a guy with a Prince Valiant haircut named Talon! As a kid he witnesses his mother get the chop from the evil Cromwell, played by Richard Lynch in a fake chinbeard! (There’s actually more than one chinbeard in this movie – it seems that in this universe, chinbeards are a prerequisite of becoming a king!) So Talon grows up and becomes a legendary barbarian, and then it’s time to take on Cromwell, and let me tell you, Cromwell doesn’t make it easy for him! Do you remember how Conan got crucified on the Tree of Woe? Well that pretty much happens to Talon too, except in a dining hall filled with gurning loons instead of on a Tree of Woe, where at least you can be by yourself and no one is laughing at you; but anyway, after a while Talon gets tired of being crucified and pulls his spikes out and gets fighting, as though nothing at all had happened and he didn’t have big gaping holes in his palms!

I saw this movie when I was a kid and remembered it as a lush and expensive fantasy epic! Ha ha, looking at it now, it seems really cheap and chintzy! Another memorable thing about the movie was the three-bladed sword, but it turns out that hardly gets any screen time at all in the movie! A little disappointing! I can tell you that the Wall of Faces and the evil wizard played by Bull from Night Court still hold up pretty well though!

I hate to end this review on a downer note, but a sad death occurred on the set of this picture while they were filming it! One night, in Griffith Park, a stuntman took a bad fall from a cliff and missed the bag! That was on my mind as I watched the movie, and it took a lot of the joy out of it for me, I do admit! You can read an account of the accident here: http://hollywoodjuicer.blogspot.com/2007/10/stunts.html ! It’s part of an interesting blog kept by a film lighting technician!

Anyway, I give The Sword and the Sorcerer one and a half tri-bladed swords! There’s some enjoyment to be had, but it’s mostly a disappointing slog! However, it should be noted that the sequel that was brazenly announced in the end credits – I love it when they do that, ha ha! – has actually come to pass, almost thirty years later! It’s called Tales of an Ancient Empire, and maybe one day I’ll review it on this very blog! Ha ha, or maybe not!
Posted by Burl at 21:44