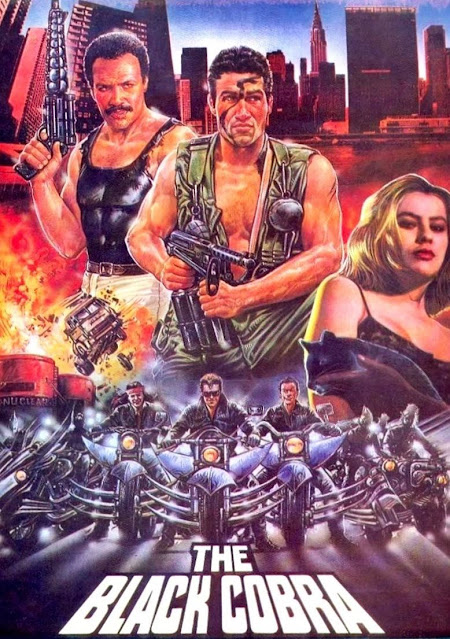 Greetings to all, it’s Burl here with another review! Ha ha, and this is a strange one: a movie that isn’t any kind of official remake, but an unofficial adaptation that makes no bones about its status as a cinematic remora! Of course there are a lot of these movies in international cinema, from the Turkish Star Wars on down, and endless Italian examples but usually they purloin from big hit movies instead of, say, the Sly Stallone vehicle Cobra! Ha ha! Yes, the picture I’m talking about today is the Italian-made, Fred Williamson-starring, hyper-literally titled Black Cobra!

The Hammer, whom we remember from The New Gladiators, itself the Italian clone of The Running Man, plays Robert, aka Black Cobra, a homicide cop whose unconventional methods drive his captain crazy! We see his moves early in the picture when, instead of a supermarket as in Cobra, some nogoodniks have taken over a swimming pool, of all places! Meanwhile there’s a crazed murder gang with a profound love of studded leather, led by big-faced Bruno Bilotta from Warrior of the Lost World! In the course of their everyday murder activities, Bilotta has his picture taken by fashion photographer Miss Trumbo, played by Eva Grimaldi, who was in something called The Fine Art of Love: Mine Ha Ha! Based on that title, I supposed I ought to see that one some day!

The murder gang decides that the hospitalized Miss Trumbo must be killed, and as step one of their plan to infiltrate the medical institution, they wrap a chain around some poor motorist’s neck and drag him to his bloody demise! Step two involves actually visiting the hospital, but Black Cobra arrives there too, and rides gurneys around the place while blasting away at the murder gang! Black Cobra manages to save Miss Trumbo from the murder gang, but only just, and so he decides that the best way he can protect her is if she comes and lives with him!

At home, Black Cobra is utterly dominated by his cat Purvis, which terrorizes him with its constant demands for colour-coded cat food! (Could this be a little tribute to The Long Goodbye? Ha ha!) But even Purvis must adapt to a new routine when Miss Trumbo arrives, and one somewhat nervously expects the movie to become an Odd Couple riff, with Miss Trumbo complaining about Black Cobra’s homemaking habits! But this doesn’t come to pass! Instead, happily, the murder gang attacks again and people are blasted by Black Cobra’s big gun or the grenades he will occasionally toss!

Meanwhile Black Cobra has a partner whose teenage daughter is kidnapped by the violence gang, and their wish is to trade her for Miss Trumbo! But Black Cobra is having none of it, informing his partner that “I’d go and get her even if it was Santa Claus’s daughter!” Ha ha, I’m sure Santa is happy to hear that! The climax is decently well done for a cheap little rip-off picture, I suppose, and includes a fake-out or two; but the gang leader’s demise is nothing close to the spectacle offered in the Stallone picture!

Those are the things you miss in these rip-offs! Cobra drove a big black tank-like vintage car; Black Cobra drives a shitbox Ford! The violence gang in Cobra chanted and banged axes together; the clowns in Black Cobra just sit around moping in their abandoned factory hideout! Ha ha, they don’t even keep the furnaces blazing like the guys in Cobra did! On the other hand, neither Cobra nor any other movie I know of can boast a collision between a Chevy Blazer and a windsurfer, ha ha, but Black Cobra sure can! For that, and for all its other little peculiarities, I give it one tin of blue cat food and a half a tin of red!
Posted by Burl at 00:02