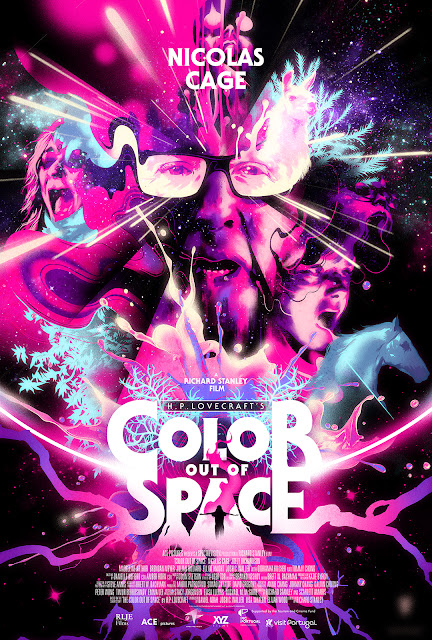 Good day goldenrods, it’s Burl, here to review some of the latest craziness! Now when I was a younger film enthusiast, one of the more interesting names circling around the cucumber patch was Richard Stanley, the behatted eccentric who made Hardware and Dust Devil! After that, and following a quickly-curtailed but legendary attempt to direct The Island of Doctor Moreau, it seemed that he simply became too strange for the silver screen, and we all feared he’d been consigned to the dust bin of film history for ever and ever! Thankfully, however, that is not the case - in the last few years he began making genial appearances in documentaries and podcasts and other such stuff, and then finally made a new movie, an adaptation of the H.P. Lovecraft story Color Out of Space!

I know what you’re saying! “Ha ha, Burl, I’ve already seen the Ovidio J. Assonitis adaptation from 1987, The Curse, featuring TV’s Sheriff Lobo in a starring role! Do I really need to see this one?” My answer to that is yes, because the ways in which this version is superior to its predecessor can hardly be counted! The 1987 version is, frankly, chock full of assonitis, and while this can sometimes be a good thing, as it is with Tentacles or The Visitor, in the case of The Curse it did old Howard Phillip Lovecraft no especial favours, ha ha!

Believe it or not, the story this time is set on a family alpaca farm! Yes I said alpacas! And in the family we have dad and chief alpaca enthusiast Nathan, played by Nicolas Cage from Con Air; Theresa, a stock broker of some kind, who comes in the shape of Joely Richardson from Event Horizon; and three kids, a teenage boy and girl, and little Jack, whose spectacles give him that Billingsley look but also mark him as doomed! Hippie squatter Ezra, who turns out to be none other than Tommy Chong from After Hours, is also on hand, as well as a newly arrived hydrologist conducting some kind of research survey! The hydrologist is the audience stand in, the most normal character, and we're grateful to have him!

Well, another new arrival on the farm is a meteorite that carries with it an eerie magenta: the color referred to by the title! Ha ha! Then everything goes buggy: bizarre flowers grow, the alpacas turn odd, mom cuts off her fingers, the well glows and seems to make friends with the little boy, and dad, who was always weird since he’s played by Nicolas Cage, only gets weirder! Much of what happens next owes a great debt to John Carpenter’s The Thing, but then again, The Thing owes a great debt to Lovecraft!

All of this is deeply unpleasant for this poor family of oddballs, and by the last reel the movie weaves together an uncanny atmosphere of strange upset in true Lovecraft style! I found it effective, particularly because I watched it with my own family projected onto the curtains by a powerful 4K projector! Ha ha, I wonder what passers-by outside the house must have thought during some of the stranger and more fuchsia-tinted scenes!

Of course the movie made me think about other Lovecraft adaptations, principally the Stuart Gordon pictures! Re-Animator will always be a personal favourite of mine, but Color Out of Space gives a visual tip o’ the cap more to From Beyond, which also used the pink and purple spectrum to good effect! How this new picture compares with Dagon is unknown to me, since I have not yet seen Dagon! Ha ha, I will soon though, seeing as how it’s sitting in my VHS basement just waiting for me, beckoning come-hither with its pseudopods!

Anyway, there was a lot that could have gone wrong in bringing this picture to the screen, and it’s just so delightful to find that very few of them did! Stanley’s spiritual sensibility fits the material well, and in technical terms the picture accomplishes just exactly what it needs to! I think they really pulled something off here, and I happily award Color Out of Space three alpacas!