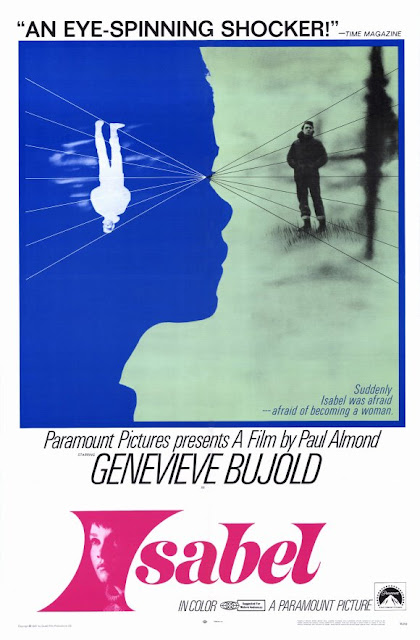 Eh bien, c’est Burl! Ha ha, I’m here to talk about a picture I saw on TV long ago, back when the Canadian TV stations were playing any and all Canadian movies they could find, over and over again! That’s how I first saw pictures like Rituals, Prom Night, and Meatballs! But this movie is another thing entirely: it’s the moody exercise in Gaspé-Gothic known to all as Isabel!

Ha ha! The star of Isabel is of course Isabel herself, played by Geneviève Bujold from Earthquake and Dead Ringers, who was married at the time to this film's writer-director, Paul Almond! Bujold plays a young Montreal-dwelling woman who, as the story begins, is on a train back to her little hometown on the Gaspé coast to see her dying mother! But she arrives in her curiously Anglo community a little too late, and is left to bumble around in a big dark farmhouse with her uncle, who continually issues thunderingly obvious hints that he would like her to stay and cook his meals and help out on the farm! The uncle, played by Gerard Parkes from The Pyx and Spasms, is plagued by troubles of the heart - physical, not emotional ones, ha ha - but like many old rural types, is not taking his encroaching decrepitude with quite as much grace as he might!

Isabel, meanwhile, resists his entreaties, claiming she needs to get back to her job and life in the big city! But she keeps receiving, or not receiving, letters that one by one remove her reasons for leaving the Gaspé: her roommate, who may or may not also be her girlfriend (we are reminded of Theodora’s unseen roommate in The Haunting), is ghosting her, and her employer lets her go! Stewing in this death-cursed place, thinking about the drowning demises of her father and brother, and about the shell-shocked grandfather who went mad, ran around the town in his gas mask and eventually jumped into the spinning blade of a sawmill, or the young cousin who was evidently eaten by a pig, it's not surprising that she begins to have odd, troubling, ghostly visions! She has encounters with people such as the rugged Jason, played by Marc Strange from Run and Tommy Boy, who buys some of the uncle’s livestock and proves pleasant company to Isabel; a needy local called Herb, essayed by Al Waxman from Tulips, who exudes a date-rapey vibe he makes good on before the story's end; Isabel’s much older sister, who is also a sister in that she's a nun, but not a particularly sweet or friendly one; and, in my very favourite performance in the whole entire picture, a storekeeper played by J. Donald Dow! It broke my heart a bit when a voiceover flashback made him sound a bit creepy!

While there are plenty of details of farm-town society, including the inevitable fiddle dance, the picture is really about Isabel’s interior life and the threat of emotional disintegration as illustrated by horror tropes and spooky atmosphere and intimations of past abuse and trauma! In that respect it’s like a quieter Canadian version of Repulsion or Images, and though it would in all honesty be hard to classify Isabel as a horror picture, it nevertheless contains as many or more genuinely scary scenes than many avowed horror pictures do!

Some have complained that the movie is slow and boring, but I never found it so! Even in the less eventful passages there’s always the gorgeous cinematography of Georges Dufaux to admire, or the coastal early-spring atmosphere, or the strong acting, or the insanely cute Bujold herself, ha ha, whose look in this film very likely instilled my weakness for dark-haired pixie-cut gals! On the debit side there’s a convolutedness to the narrative and to the psychological landscape of the film that is never really worked out; and several scenes near the end are lacking in illumination of any kind! In this darkness it’s not always clear who’s who and what they’re doing, nor what, in the past, they may have done! And where things stand at the end? Ha ha, it’s anybody’s guess! Nevertheless, I enjoyed the picture immensely, and I believe that if you approach it in the right spirit and in the right mood, you will too! I give Isabel three booters!