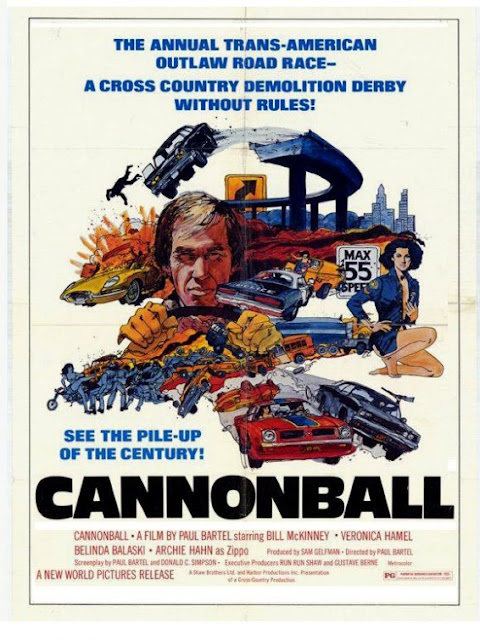 Vroom vroom and hello, Burl here with a movie review for you! Today I’m talking about a star-studded movie that dramatizes the famous illegal cross-country race known as the Cannonball Run! Ha ha, so is the movie in question The Cannonball Run? No, it’s the earlier, altogether more satisfying Cannonball!, directed by famed beardsman Paul Bartel!
David Carradine from Armed Response plays Coy Buckner, our hero, whom we meet as he’s waking up from a terrible dream! He’s about to embark on the great race, driving a gaudy red Trans-Am of course, and a series of mixups and confusions ensure that his goofy buddy Zippo (played by Archie Hahn from Protocol and Innerspace) and his grand amour (Veronica Hamel from When Time Ran Out… and A New Life) will be traveling in an exact copy of the same car!
Meanwhile we have A Couple Of Crazy Kids In Love, played by Robert Carradine from Mean Streets and The Pom Pom Girls and Massacre at Central High and Number One With A Bullet, and Belinda Belaski from Piranha and Gremlins; a vanful of ladies led by Mary Woronov from Get Crazy and Black Widow; a psychotic hillbilly played by Bill McKinney from Looney Tunes: Back In Action, who’s riding with country music star Gerrit Graham, from Class Reunion and The Annihilators and of course Chopping Mall; a flamboyant German played by James Keach from Vacation and Moving Violations; and a portly moustacheman, played by Carl Gottlieb from Jaws and Into the Night, who simply loads his Chevy Blazer into a plane and flies to New York!
So you can see that there are a lot of familiar faces amongst the racers! On top of that, it seems the race organizer is none other than the legendary Patrick Wright, who was in Roller Boogie and If You Don’t Stop It… You’ll Go Blind, and directed Hollywood High! And best of all is Dick Miller, from Apache Woman and Carnival Rock, playing Coy’s brother Benny Buckman! Ha ha, Benny is placing all sorts of bets with a mobster played by director Bartel, which leads to a weird scene in which Miller is savagely beaten by thugs as Bartel serenades him with quasi-Cole Porter tunes of his own composition! There’s an even weirder scene too, in which Bartel’s mobster has a confab with a pair of Mafiosi played by Martin Scorsese and Sylvester Stallone! Ha ha, odd!
And while we’re talking cameos, we ought to mention that the directors of Hollywood Boulevard, Allan Arkush and Joe Dante, appear as a pair of small-town car nerds, and the director of The Slams, Jonathan Kaplan, shows up as a gas station attendant, and the director of A Bucket of Blood, Roger Corman himself, appears, sitting behind a tiny desk in a tiny office in the role of the Los Angeles district attorney! Whew!
There’s more to the picture than cameos, though: there’s car crashes! Lots of them, all accompanied by huge fireball explosions! They must not be too terribly hot though, because after a climactic sequence in which dozens of cars collide and erupt into infernos of metal and flame, we are told that seventeen people have been admitted to hospital as a result! Ha ha, this after we’ve seen that one of the people involve in the pile-up was shot in the head and another had a car fall on him!
Cannonball! isn’t a great picure, but it has that 1970s New World Pictures charm, some terrific humour (Bartel’s singing mobster and Gerrit Graham’s performance being highlights) and that astonishing cast! I enjoyed it thoroughly, and will champion it over any Burt Reynolds nonsense any day of the week! Ha ha, I give Cannonball! two and a half flaming ballcaps!
Posted by Burl at 12:25