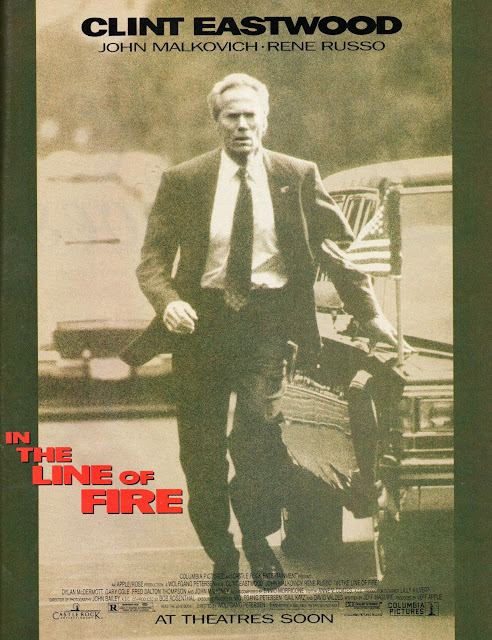 Hi, it’s Burl here to review what must be one of the finer Hollywood thrillers of the 1990s! What else would you put on that list, I wonder? Probably pictures like The Fugitive, Speed and Heat! Anyway, In the Line of Fire is your basic Tinseltown pulse-pounder, I guess, but it’s an efficient thrill machine as these things go!
There’s not that much to say about it, though! The plot involves a Secret Service agent, played by that great old wooden pole carving Clint Eastwood, well known from his appearance in Tarantula, who is filled with guilt at having not adequately protected President Kennedy in Dealey Plaza on that fateful day! But he gets another shot at protecting a President, this one fictional, when cool, calculating psychopath and aspiring Czolgosz John Malkovich shows up and chooses Clint to be his special pre-assassination confidante!
For a guy in need of redemption, this is a gift from the heavens, or at least from Aisle 7 of the Hollywood Contrivances Warehouse! But that’s all right – there’s a long and storied history of the cop/killer cat-and-mouse game in Hollywood films, and this one probably got the go-ahead after the success of Silence of the Lambs, as the relationship between Malkovich and Eastwood is superficially similar to that between Hannibal Lecter and that lady!
Anyway, there are some amusing detours for Malkovich along the way, which reminded me a bit of The Day of the Jackal! A bank teller lady gets a pretty stiff neck twist when she inadvertently discovers that Malkovich does not hail from the Twin Cities area! Her roommate also gets the twist! And some duck hunters fall “afoul” of Malkovich, ha ha, when they see him practicing with his little plastic pop gun!
Meanwhile, Clint is investigating Malkovich’s doings while trying his best to keep an eye on the President! There’s a fellow agent with whom he would like to make l*ve, a lady, and I was sure she was going to end up as a Damsel In Distress, but even though she didn’t really have any other function besides The Sharp-Tongued Woman Who Is Just As Good As Any Man, I was glad to see at least that she didn’t have to be saved by Clint! (Whatever happened to that Rene Russo anyway?)
This was directed by Wolfgang Peterson, who did that fine U-boat picture Das Boot! His Hollywood movies are a lot blander (Enemy Mine was pretty weird, sure, but can anyone even remember what happened in Shattered?), but this one at least tries to be a bit adult about things, and to present itself as a shiny and sharp-creased product! And it does! Malkovich is pretty good in the film too, and he puts on a lot of different disguises, so it’s got that going for it! I award this efficient motion picture product two putty noses!
Posted by Burl at 23:12

Email ThisBlogThis!Share to TwitterShare to FacebookShare to Pinterest
Labels: 1990s, action, Eastwood, saw it on the big screen, suspense