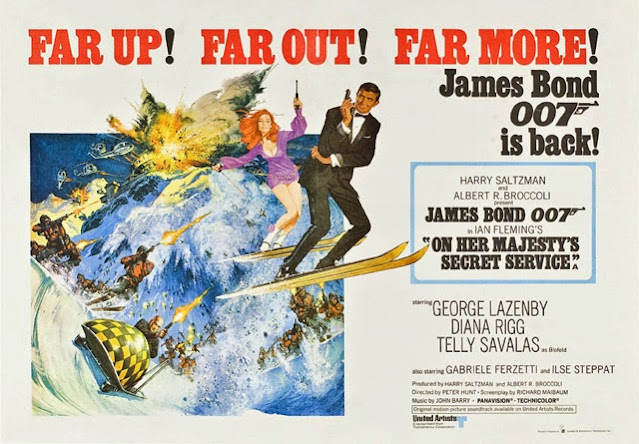 Ha ha, this never happened to the other fellow indeed! Yes, it’s Burl again and Bond again, only this time the superspy in question played not by Connery, not by Moore, not by Dalton, Brosnan, or Craig, but by the doughty one-offsman George Lazenby! So yes, of course the picture is On Her Majesty’s Secret Service!

Now, I’m not so sure I’d have watched this movie in July had I remembered it was a Christmas picture, but there you are! It’s not one of your more action-packed outings, to be sure, but, ha ha, Lazenby’s not the only novelty here, because the picture tries a bunch of new things! Because it’s the late 1960s, we get some elliptical editing and other New Hollywood movie tricks, particularly in the fight scenes! I enjoyed this, though to contemporary audiences it may well have seemed like the kind of blender-editing which makes Quantum of Solace such a chore to sit through!

He does some garden-variety spy stuff, like when he sneaks into an office to steal some documents! But he doesn’t just snatch the papers, nor photograph them with a little spy camera, no: he has a buddy dress up like a construction worker, then place a large case into a crane bucket so it can be hefted up the side of a building to the fifth floor where Bond is! The case contains a device which proves to be an enormous photocopier, ha ha - state-of-the-art equipment for any spy in 1969, I’m sure!

Of course it all ends up in Blofeld’s mountaintop allergy clinic on Christmas, ha ha! Blofeld even has a tree and gives out neatly-wrapped gifts! And here, the perennial villain is played by Kojack himself, Telly Savalas, whom we know so well from his equally sinister appearance in Mario Bava’s Lisa and the Devil! Ha ha, Blojack! And what’s great about this iteration of the super-villain is that he gets a lot more personally involved in the battle against Bond than we see in other pictures! He’s not just sitting in a chair and stroking his pussy this time, no sir!

The big question is: how’s Lazenby? Well, he’s demonstrably no Connery! He’s matey and cavalier, and seems equally uncomfortable doing the action as he does in the long section at the allergy clinic during which he must wear a kilt and pretend to have no interest in the beautiful ladies who abound there! And in the end he’s not really an actor, nor does he claim to be! But for all that I didn’t mind him - certainly I prefer him to Moore in his smarmier moments! And the movie Lazenby has going on around him is, while not exactly action-packed, interesting and solid enough to raise him up to a quite acceptable level!

And the movie sticks the landing, emotionally speaking! This is perhaps the only Bond picture which ends with the superspy sobbing instead of snogging, and it makes for a genuinely affecting conclusion! Diana Rigg, who plays Mrs. Bond, and whom we know so well from Theatre of Blood, is quite believable as the woman Bond would want to settle down with, and Gabriele Ferzetti, who was Sandro in L’ Avventura, is terrific as her friendly gangster dad! I give On Her Majesty’s Secret Service two and a half purple parcels!