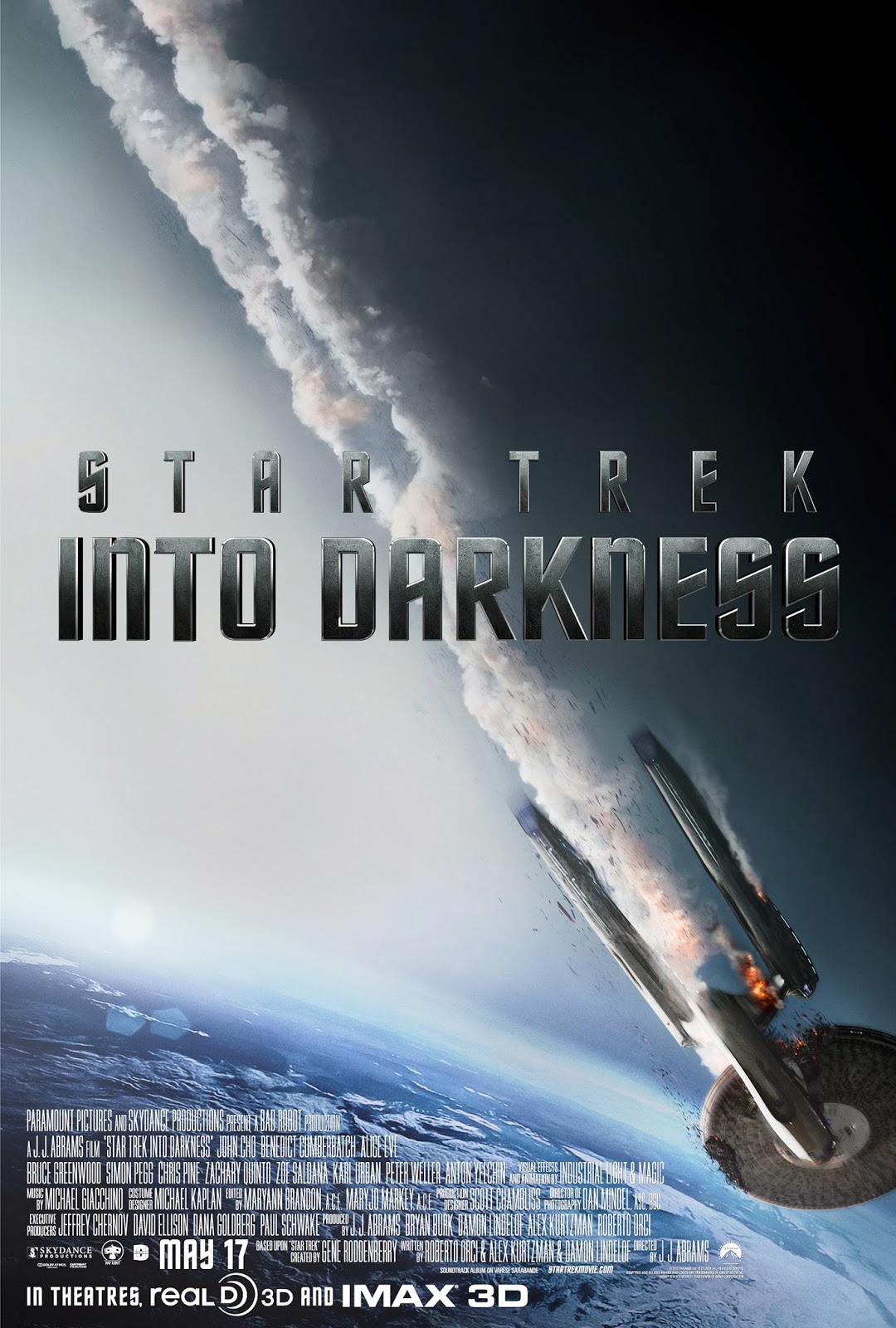 Boldly going where no Burl has gone before, ha ha, it’s Burl, here to review the biggest and newest and loudest Star Trek picture, Star Trek Into Darkness! Ha ha, I’m not what you’d call a big fan of this particular cultural behemoth; if I were, my card would have to be removed and my insignia torn from my chest the moment it was discovered that I’ve maybe seen three or four episodes of the original show, fewer still of the New Power Generation, and none of the various other TV shows, whose lineaments I could barely discern even in their heydays!
But I’ve seen most of the movies, so I’ve got that going for me, ha ha! And like many people, I consider the Wrath of Khan one just about the best of them, overflowing as it is with Rich Corinthian Leather! Apparently there was some question as to whether the bad guy in this one would be Khan or not, and I’m not sure why there was ever any doubt, or why anyone would care much one way or another! But for those still not put wise and who actually do care, I’ll let you in on the big secret: yes, the bad man in this is the same bad man, more or less, whom Mr. Roarke played in Wrath of Same! Ha ha!
Well, now that cat’s out of the bag, what can we say about the picture itself? I’ve always enjoyed seeing these movies in the theatre, because the spaceships always look so great on the big screen when they crash or blow up or do other things! I’d certainly have enjoyed this one better in the cinema, no question, because that’s mostly what this picture has going for it: big spaceships doing things!
The interplay between the cast is pretty good too – it’s a bunch of talented people, all of them hitting pretty much the right notes required to pay homage to the old characters (and actors) and at the same time make something slightly new out of it! It’s certainly a change of pace for the fellow who played the title role in Dredd, for example, but he has a blustery good time with his role as Dr. Leonard Bones! Simon “Paul” Pegg makes a fine Scotty, John Cho is a grand Sulu, and so on! Even little Anton Yelchin, well known from the Fright Night remake, does a decent Chekov! And we have a surprise appearance from Robocop himself, Peter Weller, and a terrific performance from the star of The Malibu Bikini Shop as Captain Pike!
Behind the camera is the fellow who made Super 8, and I certainly have to applaud his technical skills! I have read criticisms of his love of lens flares and always dismissed it as some kind of crazy nitpicking; but I do have to admit that the darn things are everywhere and get a bit distracting! I suppose the hard mattes and perhaps the entire matte box never made it into the camera package – ha ha, some equipment rental schlub must certainly have gotten an earful for that little blunder!
Anyway, like all big action pictures these days, there are about three endings, maybe four, and by garr, why they don’t just dissect that Khan into little pieces and be shut of him, I just don’t know! But no, they store him in a tube! He’s never a very scary villain, and he’s never less scary than when they reveal his ultimate goal, which is to kill almost everybody! Ha ha, this is done in such an offhanded way that it either presupposes great knowledge of this character and his plans, or just had to be shoehorned in among all the exploding junk after someone pointed out the generally low stakes while it seems all he wants to do is beetle off with his 72 friends, for whom he feels a ridiculously strong love!
I won’t go on about the other things I found ridiculous or implausible in this picture, because nerds have already been all over it like scarabs! I will say that it was more or less enjoyable while it was on, though there were some longuers and some moments in which the silliness slopped up over the edges and into my seat! But for its technical dazzletry and eagerness to entertain, I’ll go ahead and give Star Trek Into Darkness two tribbles!
Posted by Burl at 21:42