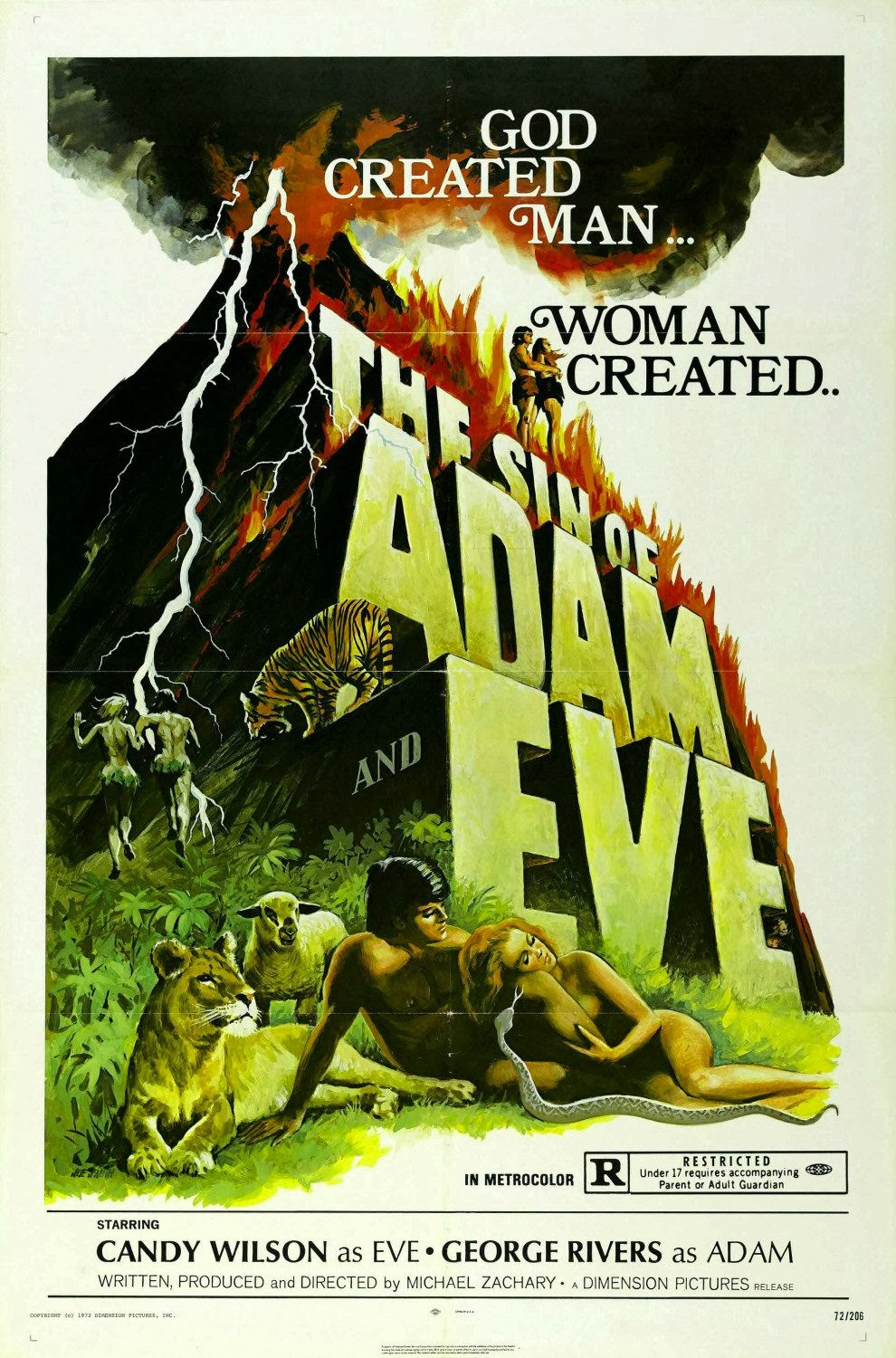 Ha ha, let there be Burl! Yes, it’s me, just plain Burl, here to review a Mexican picture dramatizing the story of Adam and Eve! It’s called The Sin of Adam and Eve, and quite naturally it spends a good deal of time on the parts before the great fruit-eating sin, when they didn’t wear any fig leaves at all! After the eating of the fruit – which doesn’t look like a terribly appealing viand, it must be said! – things move pretty quickly, because fig leaf shorts and the later accouterments we see are not what the customers paid their money to see!
So it’s your basic nudie flick! Ha ha, do I need to describe the plot? Well, after a Genesis dramatized through stock footage of erupting volcanoes and quaking landscapes, Adam is formed out of dust! He’s a burly fellow with a perpetually bewildered expression, and we see him wander about the Garden for some time, discovering such joys as swimming and shouting! Ha ha, truly a paradise!
Soon enough the Lord decides Adam needs a companion, and after a little rib surgery, Eve is formed! She’s a very comely lass, it must be said, and Adam shows her around the Garden for quite a while! The Lord points out the forbidden Tree of Knowledge and tells them it’s a no-no! But a snake is prowling around the premises and whispering to the not-too-swift-seeming Eve that she really ought to try some of this marvelous fruit – hey, she owes it to herself, and who is this Lord anyway to tell her what to do?
After many scenes in which Eve tries things like wearing an enormous flower on her head or showing off some pebbles, and Adam reveals himself to be an insensitive clod, the fruit is finally eaten! Then there’s the fig leaves, the casting-out (during which the pair lose one another for a while), and the separate wandering of the wastelands! Adam fights or flees from a whole series of animals, which also chase and eat one another – ha ha, no ASPCA on this set! – and eventually the pair are reunited!
Well, I guess the idea is that the picture has a sad ending – if only Eve had been able to resist the temptation, humans would have lived in a perfect, plentiful paradise and everything would be great, and there would be no war, no strife, no privation! But it seems like it could all have been avoided if only the Lord hadn’t put that tree there! Was it meant as some kind of test? If so, why? It makes the Lord seem kind of mean and dogmatic, at least as far as this picture explains things!
Anyway, it’s mostly a nice little movie with plenty of scenery to look at, ha ha! There’s no dialogue besides “Adam!” and “Eve!” shouted incessantly; but there’s plenty of narration! It’s mostly a curiosity: a Biblical picture with exploitation aplenty! It’s not the most thrilling thing ever made, but I enjoyed it in an obscure way, and I’m going to give The Sin of Adam and Eve two flaming swords!
Posted by Burl at 16:20