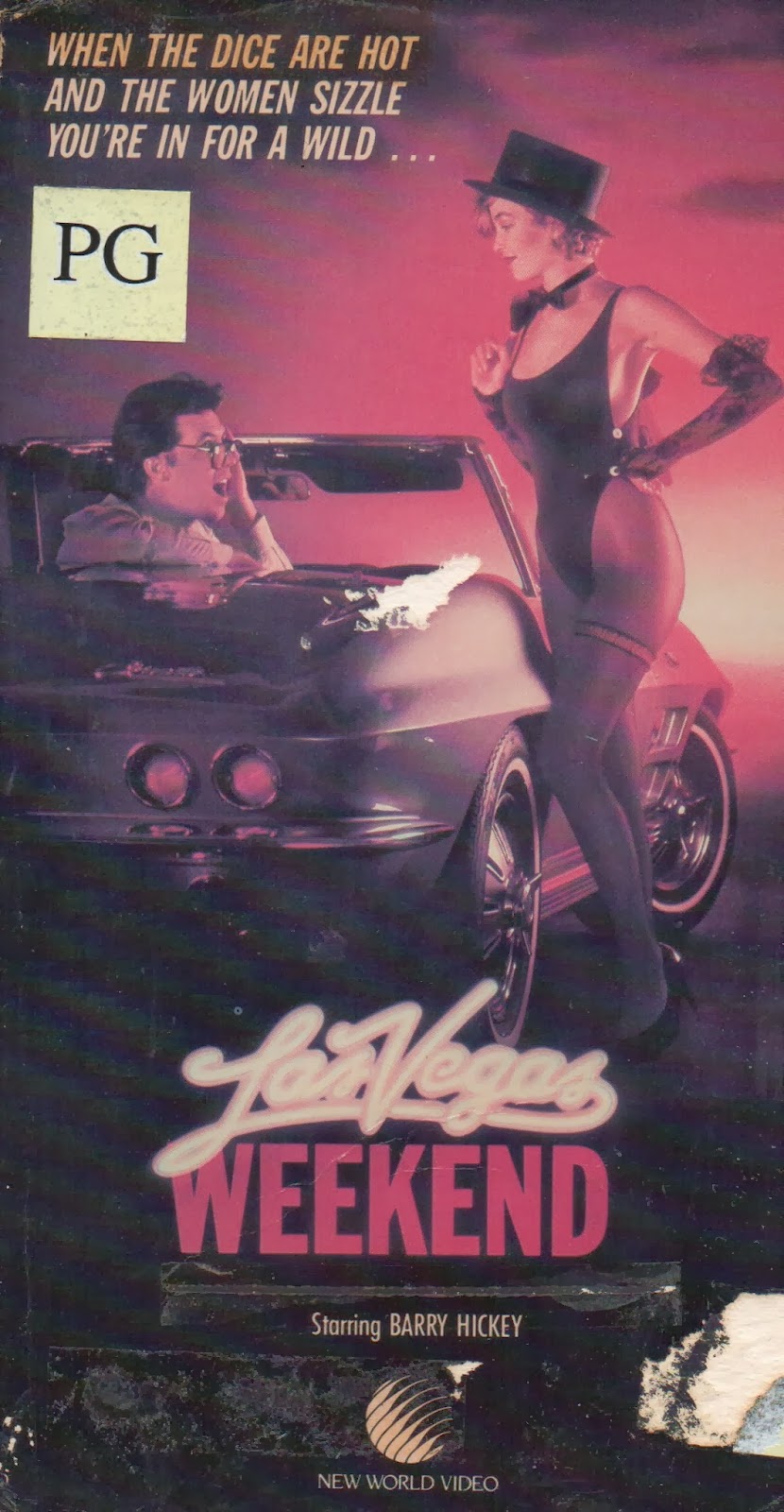 Ka-ching, it’s Burl! Ha ha, yes, I’m here with a review of a weird little nerd comedy from the mid-80s, which most likely got the green light thanks to the success of Revenge of the Nerds! This one is called Las Vegas Weekend and it features a slobbering glasses nerd named Percy, who also happens to be a largely unsocialized computer wizard obsessed with his Wang! Ha ha, that joke is made so many times through the 83 minutes of this picture that you lose count, and it begins to feel like a verbal version of the time Sideshow Bob stepped on all those rakes!
Percy is a grad student at some Los Angeles college, and it seems he has developed a system of card-counting he figures would be perfect for Vegas! When his professor, played by Ray Dennis Steckler of all people – ha ha, you remember Rat Pfink A Boo Boo, I’m sure, and Wild Guitar and all those other great pictures he made! – gives him the boot from his institution, just as Venkman, Spengler and Stantz got it in Ghostbusters, Percy decides to try his luck in that desert gambling mecca! So the lady who has a crush on him lends him her car, and off he motors to Sin City!
Once there, Percy puts his system into action at the blackjack table, and he wins a bundle! This attracts the attentions of Ace and Louie, two goofy gamblers, or maybe criminals – it’s hard to tell! They seem modeled on the sort of hoods Dick Bakalyan used to play in those Disney science-wizard pictures! Ace is a short bald fellow, while Louie is a big dumb lug, mugging outrageously in a desperate, frenzied attempt to inject some measure of humour into every scene; but he might as well be trying for laughs by holding up a sign reading “funny!” Ha ha!
The rest goes as expected, though with all its pointless turns and reverses, it seems to take forever! Ha ha, it feels as long as Casino! It shares an excess of narration with that picture as well! Percy wins and wins, and gets a transformative makeover and succumbs to the temptations of the flesh! Then his erstwhile girlfriend shows up, and soon Percy’s blackjack system unravels! He loses all his winnings, outrages his ladyfriend, his friends desert him and soon he is wandering the Strip to the accompaniment of melancholy music several rungs down from the kind of thing that would have played in a John Hughes movie!
There is of course a logic-defying reunion between the two sometime-sweethearts, and then several more scenes of blackjack, which the movie hardly needed frankly, and then a big slot machine explodes! The end! Ha ha, if you can only watch five minutes of this movie, make it the last five! They’re great!
But you may as well watch the whole thing, because you’ll witness some very strange performances! Percy makes both a convincing nerd and a convincing rico suavé, which is pretty impressive – almost Jerry Lewisian! It’s certainly a more committed performance than I’d have expected, and comes off like a half-talented normal guy doing an Eddie Deezen impersonation! There are other familiar faces on board too, like Jace Damon from Hell Squad, Macka Foley from Ed, and of course Tamara Landry from Bikini Med School! Ha ha!
Now, I don’t usually like gambling pictures – I just don’t care much for scenes of people knowing they should hold 'em or fold 'em or walk away or run, but don't! This is why I’ve never seen California Split, The Gambler, Lost in America, ha ha! (I have seen Vegas Vacation though!) But in this movie it's more tolerable, because you don’t care one way or another which way it goes, and judging from that last scene, neither did the filmmakers! Ha ha, it’s got all this and an extended nerd lovemaking scene, so how can you go wrong! I'll tell you how – if it’s not very good, ha ha! I’ll give Las Vegas Weekend one and a half exploding slot machines!
Posted by Burl at 22:09