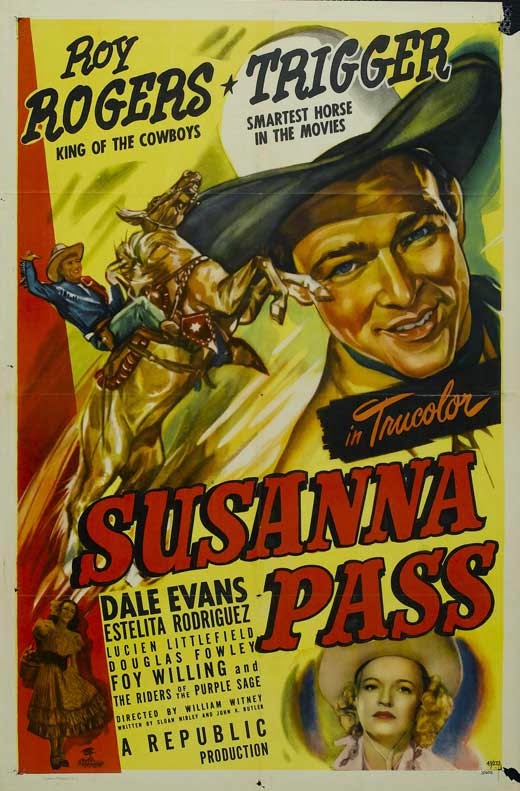 Yippee-ki-yay, it’s Burl, roundin’ up another movie review for you! Ha ha, this one is, delightfully I feel, called Susanna Pass! It’s a Roy Rogers picture, which means of course that it co-stars both Dale Evans and The Smartest Horse In The Movies, Trigger!
I guess this is a Western – well, no doubt about it, actually! The thing that caused me a moment’s hesitation is that it’s a contemporary Western, with cars and trucks and radios and so forth! That’s always a bit strange! Ha ha, the action takes place in and around the beautifully-named Susanna Pass, where a kindly old man named Russell runs a fish hatchery, a nasty old man named Martin – Russell’s brother, as it happens – runs the local newspaper, and Roy Rogers is the game warden!
Meanwhile two escaped convicts arrive in the area! Bob is out for revenge against Martin, who set him up, and he also wants to get his hands on a vast reserve of oil he suspects is located beneath the fish hatchery lake! Roberts, the other convict, is just along for the ride, but happens to be a shady oil engineer! The two have a fight and Bob catches a poking! Ha ha, and after that there are a lot of plot details, several explosions and plenty of murders! Yes, this is perhaps one of the most murder-happy Roy Rogers movies ever made!
It’s the poor fish who take the most casualties, however! The bad guys keep blowing up the lake with dynamite, and fish are floating everywhere! Meanwhile Roy and a kung-fu ichthyologist named Doc, played by Dale Evans, appear perpetually close to having a romance, but it doesn’t ever happen! There are plenty of songs though, and a passle of fisticuffs, and at one point the whole movie stops to become a Jean Painlevé-style nature documentary so we can learn about how fish hatcheries work! Ha ha, and all of this is packed into about sixty-seven minutes!
I enjoyed the picture quite a lot, I must say! Roy maintains his pleasant, smiling veneer even through all the murders and double crosses! Also, the Trucolor photography is very lovely, and the locations are much prettier than the usual dusty Iverson’s Ranch trails we see in such pictures! I liked the whole fish hatchery thing too, and the fact that Roy was a proto-environmentalist battling nasty oilmen! In many ways it’s the flip side of the coin to Thunder Bay!
It’s a terrific little programmer, and even the comedy-relief Mexican father-daughter team were not as bad as one might expect! To my recollection, neither of them ever says “Ai-yee-yee-yee!” or talks about cucarachas! Dale Evans’ character is pretty progressive too – she’s a smart scientist who can take care of herself, and doesn’t fall simperingly in love with the cowpoke Roy the moment she sees him! Altogether I’d like to give Susanna Pass two and a half Riders of the Purple Sage!
Posted by Burl at 15:57