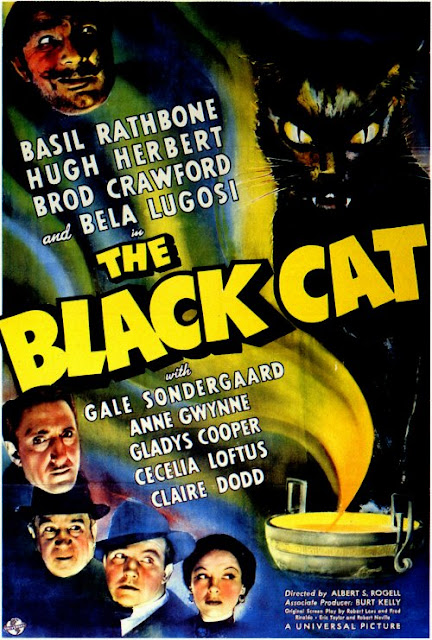 Ha ha, it’s Burl “in da house!” Today I thought I might review The Black Cat! What’s that? No, not the great 1934 Edgar Ulmer picture starring Boris and Bela! Hmmm? No, not the 80s Lucio Fulci version either! Or the weird 1960s super low budget version! Ha ha, this one was made in 1941, and if it has any actual connection to the Edgar Allen Poe story after which it is ostensibly named, it flew right by ol’ Burl!
Bela is in this one though, I should note! I wonder how many other stars appeared in two totally different films that have the same titles? Not many, I’d guess! And do you know what else: Basil Rathbone is in this picture, and later on made another version, an animated short, with that very same title! So two of the stars of this Black Cat also appeared in two totally different movies also called The Black Cat; and on top of that Rathbone also appeared in Roger Corman’s Tales of Terror, an omnibus picture that featured a segment called The Black Cat! Ha ha, that’s the vicissitudes of Hollywood for you!
But on to this version! As I mentioned, Bela is in this movie, lurking around the edges mostly, just as he did in Night Monster! Here he’s not a butler though, but a gardener, and again serves as just about the most obvious red herring you could conceive of! The plot concerns a rich, ailing old lady who loves cats – but not black cats, the racist! – and is surrounded by her vulture-like relatives who are waiting to grab her fortune the moment she croaks! One of them seems quite willing to help her along!
Broderick Crawford, of The Vulture, appears in the Lon Chaney Jr. role of the husky, romantic but rough-around-the-edges dupe – he’s a real estate agent who hopes to broker the sale of the house and its contents, but he’s not as rapacious as the others! Along for the ride is the comic relief, Mr,. Penney, an antique dealer who wants to sell off the old lady’s furniture! His running gag is that he believes antiques can be sold for more if they’re damaged, so he goes around scratching and scraping and breaking the various pieces, and admonishing the movers for being too careful with the items! It’s not quite as tiresome as the comic relief often found in these old dark house pictures, but only just!
These fellows I’ve mentioned and a whole lot of others all get trapped in this house by a rainstorm, and of course there’s a murderer loose! The eventual solution to the mystery is highly unlikely, but ha ha, I guess that’s the point! It’s not a great picture, and you could fairly accuse it of wasting Bela, and the comedy gets on your nerves, but it looks fantastic, the cast is game and it has a few spooky or at least atmospheric sequences, so I can’t judge it too harshly! And after all, it runs barely more than an hour, so it doesn’t take too much of your time even if you hate it! I’m going to give this version of The Black Cat two poisoned bowls of milk, and I’ll try to get to the 1930s and 1960s iterations sometime very soon!
Posted by Burl at 22:06