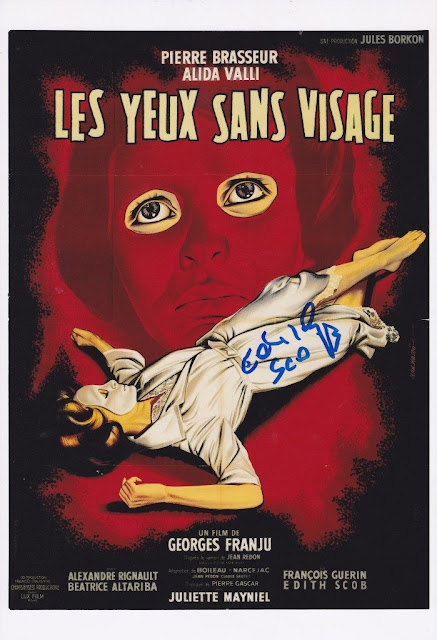 Hi, it’s Burl! Ha ha, I’ve long enjoyed movies from France, and today I thought I’d review one of that country’s fine films! This picture, Eyes Without A Face, was made during one of the nation’s real moviemaking heydays, the late 1950s, just as Truffaut and Godard and people of that sort were really gearing up!
Eyes Without A Face has a plot that will seem very familiar to many of you, but that’s because the story has been remade countless times in many different iterations, many of them by that old rascal Jess Franco! Yes, there’s a mad cosmetic surgeon, and yes he has a daughter who, through the scientist’s reckless behaviour, has been facially disfigured! And yes, a series of young and comely women are recruited as unwilling face donors for the daughter, but there is always something that goes awry with the operation, trapping the doctor, his matronly assistant and his near-innocent daughter in a descending spiral of murderous violence and weird science!
Ha ha, what a great picture! It’s beautifully shot by the great Eugen Schüfftan, who, as you know, developed the Schüfftan Process, a fantastic trick effect you should look up, and also shot such an oddball array of pictures as The Bloody Brood, The Hustler and Chappaqua, many G.W. Pabst films, a René Clair movie or two and, early in his career, in a strange premonition, a German movie called The Stolen Face! He also secretly shot Edgar Ulmer’s Strange Illusion, so they say, though another cameraman was credited, ha ha!
And though you’d never guess it, for a French movie made in 1959, this film is exceptionally gory! You get to see faces sliced right off, and let me tell you, audiences of the period were not used to seeing such outrageous grue! It’s a truly Great Moment in Horror when the surgeon begins scalpeling around the periphery of a young lady’s face and the blood starts dripping out of the wound slowly and realistically, Savini-style!
The smooth, eerie mask worn by the daughter is the film’s key visual element, and the scenes in which she drifts sadly about the house like a particularly lachrymose ghost are pure pictorial poetry! Ha ha, and although most of the movie takes place in some far-removed banlieu, there are still some breathtaking shots of Paris, particularly of its trains, that remind me of how much I love monochrome photography of the City of Lights from this era! It makes me want to watch a Jean-Pierre Melville film now, please!
I heartily recommend this beautiful, gory, hypnotic movie, and am pretty sure you’ll enjoy it too if you give it a look! Billy Idol certainly seems to have liked it! I present it with four pearl chokers and a fulsome ha ha!
Posted by Burl at 11:10