Burl reviews The Adventures of Tintin! (2011) 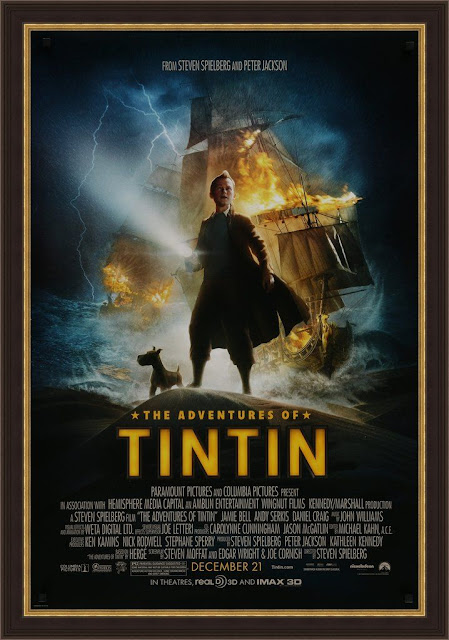 Hi, Burl here to review a cartoon movie from none other than Steven Spielberg! This is apparently his first cartoon, and it was done using a new technique quite different from the pen-and-ink styles employed by the late Walt Disney! The drawings here have a strangely lifelike look to them – but their close approximation of human appearance and movement almost comes to work against these drawings, as we are constantly reminded that they are not real precisely by the fact that they are so nearly!
The movie is The Adventures of Tintin, and I was very excited to see it as I have been a longtime fan of that world-famous young journalist-adventurer, who never writes or files a story, has no editor that we ever see, and yet seems to live very comfortably with his little dog Snowy, and enjoys endless leisure and worldwide travel! He’s really got it figured out, ha ha! I’d long thought how nice it would be to see a good live-action version of one of his adventures, so I was a little disappointed when I heard it was going to be a cartoon, but I guess it’s no big deal! A live action version would have had so many trick effects that it would have been something of a cartoon anyway like so many Hollywood action pictures these days!
The movie is a mash-up of three of the Tintin books, The Secret of the Unicorn, Red Rackham’s Treasure and The Crab With the Golden Claws! Those aren’t bad choices, but I’d have liked The Black Island mixed with Tintin in Tibet, I think! Ha ha, one has an ape in a tam o’ shanter and the other has a big coconut-headed yeti! I think this Tintin movie has been a fairly sizable hit, so who knows, maybe we’ll get that down the line!
This story has the intrepid boy reporter getting mixed up in a mystery involving a model ship and, ultimately, a sunken treasure, ha ha, naturally! He meets a man destined to be his lifelong chum, the dipsomaniacal sea captain Haddock, and together, along with help from the inept Scotland Yarders Thomson and Thompson and the little white terrier Snowy, they battle a perfidious first mate and a piratical, devil-bearded malefactor along with all their attendant henchmen!
It’s been a while since Spielberg made one of these lighthearted action pictures, or at lease a while since I saw a new one of them, and now and again as I watched this picture I got a little ghost of the frissons I recall having back when I saw Raiders of the Lost Ark for the first time! But only occasionally, and that’s in part because I’m now an adult, of course, and in part because there’s a kind of mechanical and rote aspect to the goings-on this time around! Some of the action scenes appear to have strange ellipses in them which the top-of-his-game Spielberg would never have allowed! During a big chase in an Arab town, for example, we see a tank driving along with a building stuck on top of it; but we never see the moment when the tank actually tried to drive through the building and became wedged, and then just pushed the building along with the Thom(p)sons inside! Ha ha, it’s a solid comedy action beat, or would have been, and SS is usually on those like a dog on chocolate!
That’s not the only example! There’s a bit of a “Yeah, yeah, here’s your Tintin movie” aspect to it, from the script on up! And Tintin has always been a fairly one-note fellow, but in a movie you might hope for a few little crenellations that expand upon but don’t undercut or alter the character too much! A difficult balance, I’m sure, but they might have at least given it a shot! Also, they steal at least one gag from Commando, and, ha ha, where’s Calculus anyway?
But it’s not a horrible movie or anything, just a sort of time-waster sprinkled with moments of excitement and adventure, but generally just sort of there! We get a couple of references to past Spielberg triumphs – Tintin’s ginger quiff poking above the water like a shark fin as he stealth-swims toward some villains, for example – but these somehow feel as though they were put in by different people, maybe while Spielberg was in the bathroom or something! I think it’s possible that Spielberg simply realized halfway through the process that he didn’t enjoy making cartoons after all, and that’s fine! Anyway, I give The Adventures of Tintin two blistering barnacles and am keeping my fingers crossed for a live-action Black Island adaptation!
Posted by Burl at 23:26