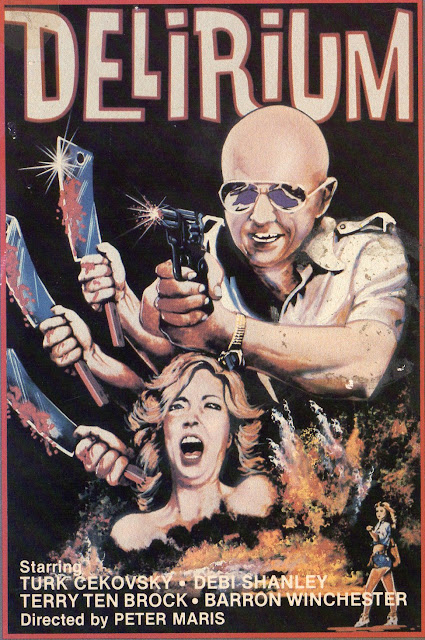 Hi, Burl here with a real obscurity for you! Ha ha, it’s called Delirium, and that is a quality this picture certainly manages to conjure up! It’s always nice to find an unexpected congruence between the title of a movie and the movie itself, even if it’s not entirely what was intended by the filmmakers, ha ha!
Here’s a movie for those times when one of your buddies wants to watch a slasher movie and another one wants to watch a police procedural and still a third would like to see a conspiracy picture! That’s when you triumphantly produce Delirium from your basement and say “Gentlemen and ladies, ha ha, guess what, I can accommodate you all!”
Well, it seems there’s a maniac named Charlie out killing ladies as quickly as he can find them! He spears one through a door, gives another a pretty stiff neck-twist, and pitchforks a third right in the neck! It’s pretty horrendous, and gory in that great fakey late-70s way! He even gives the chop to an innocent delivery boy, yikes!
While all this is happening, a couple of checkered-jacket detectives are on the case, trying to figure out who crazy Charlie is and what he’s going to get up to next! Ha ha, the detectives are a real couple of St. Louis characters, that’s for sure! Did I mention that the movie was filmed in St. Louis? Well, since the St. Louis Arch is visible in just about every shot during the daytime exterior scenes, you probably would have figured that out yourself pretty quickly!
And while all this is happening, we learn about a mysterious cabal of local businessmen – a Star Chamber if you prefer – who see to it that no criminal goes unpunished in the greater St. Louis area! To that end they hold their own little kangaroo courts on the miscreants and then unleash a psycho on them, someone like Charlie! But what’s been happening is that Charlie, their latest psycho-for-hire, being a crazy man, has gone rogue and is doing pleasure killings of his own volition! Ha ha, cabal of businessmen, surprise! Crazy man acts crazy, who’d a thunk it!
A headbald in sunglasses played by someone called “Barron Winchester” is the leader of this star chamber, and by the end of the picture he’s as crazy as Charlie! Both of them have dime store ‘Nam flashbacks, which look more like flashbacks to an abandoned St. Louis drive-in or something! It all kind of comes together in a climax which involves lots of machine guns and exploding blood capsules!
Well, let me tell you, this is one crazy picture! It was made for pocket change and a few of the scenes are too dark to see much, and the performances have a distinctly local theatre group feel, and there’s nothing imaginative or exciting about the filmmaking, but I still got quite a bit of enjoyment out of this loopy daffodil! You’ll notice I’ve said several times that the movie is crazy but haven’t said exactly how, and that’s because I don’t think I can get more specific than that! Maybe it’s just me, I don’t know! But try to get your mitts on a copy, have a look, and we’ll figure it out together! Until then, I’m going to give Delirium two unlucky delivery boys!
Posted by Burl at 22:25