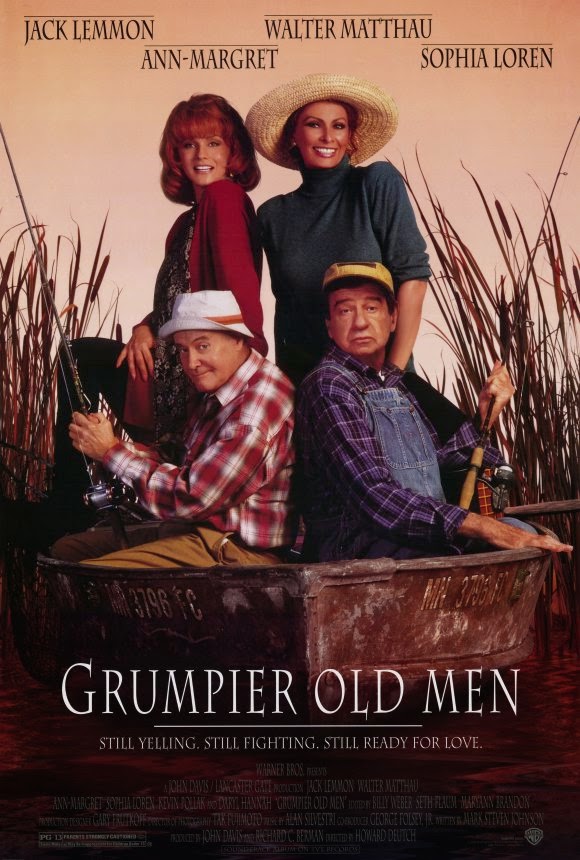 Hi, Burl here to review a sequel! In the days leading up to Christmas of 1995, this was probably one of the most-anticipated sequels to come along since The Empire Strikes Back in 1980! Everyone had seen the original, and the big question on everyone’s mind on this return to Wabasha is “This time around, does Max Goldman get his chance for romance?”
Well that question is answered, but in most other respects this continuation of the story spells disappointment! The picture takes place in the summer months, which is initially interesting, but robs the film of one of the aspects that most intriguingly regionalized the original! Ha ha, no snow, no ice fishing! Wabasha looks like Anywheresville U.S.A. all of a sudden! I guess this decision probably had to do with Walter Matthau contracting double pneumonia on the Grumpy Old Men shoot and not wishing to repeat the experience a second time around!
After the rollercoaster of romantic travails in the first picture, this one opens with Jack Lemmon and Ann-Margaret living together in Lemmon’s house! What happened to the old Klickner place, that’s what I’d like to know! Anyway, he and Matthau are on friendly terms, as their kids Kevin Pollack and Daryl Hannah have decided to get married! And then, the next thing you know, old Spaghetti Raghetti’s sister Sophia Loren moves into town intending to turn the late Chuck’s bait-a shop-a into a fancy restaurantay! The winds of war are a-blowing through Wabasha again!
Although this movie has all sorts of flaws, which are especially and unavoidably apparent when it’s held up against the first installment, it does contain arguably the best scene in both of the movies: a two-hander on the old fishin’ couch between Lemmon and his dad Burgess Meredith, where the Burge explains his secrets of long life, which pretty much amount to eating a lot of bacon and drinking beer for dinner! Ha ha, sign me up!
But what I don’t get is how they could take a character like Ann-Margaret’s Ariel Truax and then totally change her around from the sophisticated Berkeley bohemian she was in the original into an irritating, parochial shrew! She’s suspicious and jealous and easily enraged, none of which she was before! Can a year of marriage with John Gustafson really have had such a dramatic effect? The Pollack and Hannah characters are touchier too, and all of this is clearly just so they can manufacture some drama and eventfulness for the picture, and it’s so baldly manipulative that you just sit waiting for these scenes to end so you can get back to some Grandpa moments, or some old man grumping, or a scene with Sven! Ha ha, like old Sven says, “Biggest.. fish… I ever saw!”
Like many sequels this one is a bit slicker and more expensive than its predecessor, but those qualities are useless, and even a bit debilitating, to a picture like this! It ought to be gritty and realistic like the first one! And of course someone in the movie has to kick the bucket, and it was pretty much preordained who this go-round’s victim would be, but you’re still pretty sad to see him go! Ha ha!
Maybe it’s just as well there was never a Grumpiest Old Men, which feels like a strange thing to think, as in my earlier, more frivolous days I wanted nothing more! But as disappointing as this installment of the GOM saga is, I’ll still give it two fatty Alfredos for the couch scene, Sven, the excellent special effects in the Catfish Hunter jumping shot, Grandpa saying "Speak for yourself!" and several other moments!
Posted by Burl at 14:46