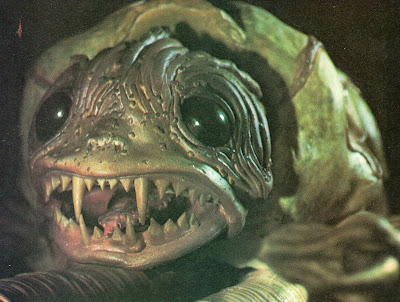 Hello! It’s your good friend Burl! I thought I’d review a movie about the monsters you might be unlucky enough to find if you go around opening up old mines in the Utah mountains! This picture’s called The Boogens, and it has the reputation of being a movie well-regarded by the famous spookbook author Stephen King!
Well, it’s not an all-time classic maybe, but I can see why somebody might consider this an underrated booga-booga movie of its era! It concerns a couple of guys who hook up with two amiable, rough-hewn older gentlemen to open up a long-abandoned silver mine, which, some fake newspaper clippings in the title sequence tell us, was the scene of mysterious attacks and cave-ins that claimed the lives of several miners! And the two guys have some girlfriends, and the four of them are all staying in a lonely mountain cabin not too far from the mine!
Well, after some dynamite is set off, what do you think is released from the previously sealed areas of the mine? You guessed it, boo-boo-Boogens! These are tentacled, vaguely turtle-like critters which scuttle about looking for victims! There’s a spooky sequence early in the picture involving a woman alone in the cabin, where she is of course menaced by boogens, which have come into her basement via tunnels that were purposely built there for some reason! And of course it all comes down to a lot of running through the tunnels of the mine, trying to evade the toothy varmints!
There are quite a few entries in the mine/cave horror subgenre – this, The Strangeness, My Bloody Valentine, the Descent films and more – and there are two potential flaws endemic to the form: impenetrable darkness resulting from the underground setting and the tediously repetitive creeping through rocky shafts that all look the same! The Boogens has generally decent lighting, which was a pleasant surprise, and while it has no shortage of the standard issue cave-creeping, it mixes things up a bit by the inclusion of an underground cavern with a lake in it!
There are a few good sequences and the characters are quite likeable, thanks mainly to the unexpectedly strong performances! But at the same time, there’s some real wasted potential in this picture! It’s stated at one point that there are tunnels leading from the mine to every house in town, which would seem to be the set up for multiple boogen attacks of all sorts of different people! But we don’t get such boogen attacks – two of our four young people, the two older guys, the lady in the house, an old doom-crier fellow in the vein of Crazy Ralph from the first two Friday the 13th pictures, and a yappy dog are the boogens’ only victims! And maybe six victims and a little pooch sounds like a lot, but somehow there nevertheless seems to be great attack-free stretches in the movie during which you want to grab the picture by the lapels and remind it that, after all, it’s a monster movie! Ha ha, bring on the boogens! I call for more boogens!
Still, it’s not like it doesn’t try to deliver the goods! There’s a bit of nudity, unusual for a Utah-based production (this and Sweater Girls are the only two Beehive movies I can think of with boobs in them), and some of the attack scenes are even a little gory! I thought this picture had a lot of heart, and that’s worth a fair bit to ol’ Burl!  Plus I’d like to say that the dog in this movie gives one of the single greatest canine performances I’ve ever seen! I could recommend it just for him, actually, and was sad when he became boogenmeat! I give this effort three not completely wrapped bath towels!
Posted by Burl at 20:40