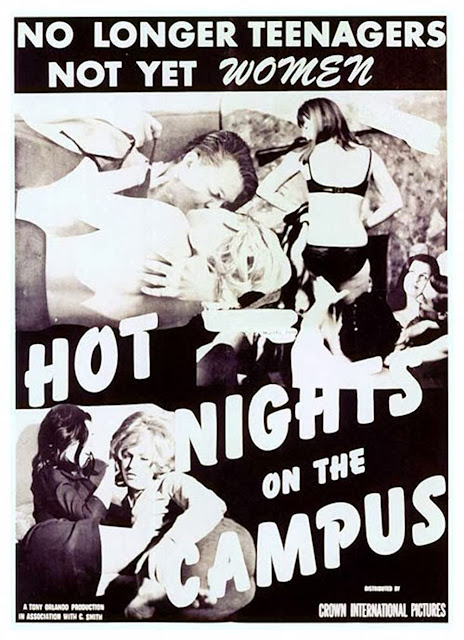 In grimy black-and-white, it’s Burl, here to review olde-tyme erotica! Ha ha, what would you get if you teleported a Michael Findlay roughie like The Touch of Her Flesh together with a regional campus picture like And No Birds Sing? Well, I think you’d open the telepod at the other end, and after the smoke cleared, out would stagger a picture very similar to Hot Night on the Campus!

Of course the focus is more on the hot nights than the campus, and to tell you the truth I wouldn’t have minded a little more mid-60s NYU campus material than we get here, because we get virtually none! Our story, such as it is, concerns Sally, just off the bus from small-town Indiana to attend college in the Big Apple; her family friend, whom she’s long considered an uncle, is a professor at the college and sets Sally up in an apartment with a bunch of other young ladies!

Gigi Darlene from Crazy Wild and Crazy plays Sally, and her new roommates are essayed by a gallery of faces familiar to those of us who’ve seen a lot of Something Weird Video releases! My favourite is Judy Adler from The Sin Syndicate, essaying the role of Fran, the beatnik sex maniac! There’s also Darlene Bennett from Nudes on Tiger Reef and Joanna Mills from The Love Merchant! Soon after Sally’s arrival, the girls hold an erotic rumbustification, which starts off normally enough but soon everyone is down to their scanties and building human pyramids, and Fran is carried off into the bedroom by a posse of men! And, oh gasp, there are two of her female roommates lying together on a bed making sweet love!

Of course Sally is scandalized, declaring in her voiceover narration that this party is the most horrible nightmare ever! Rural Indiana never prepared her for this, ha ha! But after she talks about it with the family friend professor guy, and separately with a young fella she met at the party, she’s soon enjoying the big city ways and performing bohankie on the reg with both of these men! (One at a time, though – ha ha, she’s still a Muncie girl after all!) Yes, she really gets into the swing of things, as one does once one has discovered the magic of sex!

But in these movies pleasure always comes at a price, and it’s not long before Sally is feeling ill and clutching at her stomach! A nudie photographer diagnoses her condition: she’s pregnant! Oh, what will she do? The men in her life are no help at all of course, and they're even worse than that – they instantly transform into jerks who push her around and tell her it’s not their problem! But a roommate called Purice knows what to do! She sends Sally to a horrible abortion apartment staffed by a grim, straggle-haired old lady and featuring the most cheerlessly blazing fire ever seen on film! And while one might have thought such back-alley establishments a part of America’s past, it now seems they, and the many horrors and health risks that go along with them, are a firm part of its future too! America, what are you doing?

It works out for Sally, because the fakey happy ending of this picture has her flee the old abortioness’s apartment before the horrible woman can get out her coat hangers, and then, what do you know, Fran’s boyfriend declares that he wants to be with Sally, to marry her and take care of her and her baby forever! A grateful Sally agrees, but being forced into a lifelong relationship out of desperate circumstance doesn’t seem much like a happy ending to me!

But while the last act of this picture (if it can be said to have acts, other than mildly sexual ones) is depressing, the first forty-five minutes or so are pretty fun, if you like grimy views of mid-60s New York! Ha ha, and I sure do! The content is nonsensical, that’s for sure, but this movie is an artifact above all, and an enjoyably inept one! I just wish it spent a little more time actually on the campus! I give Hot Nights on the Campus two shapeless black beatnik sweaters!