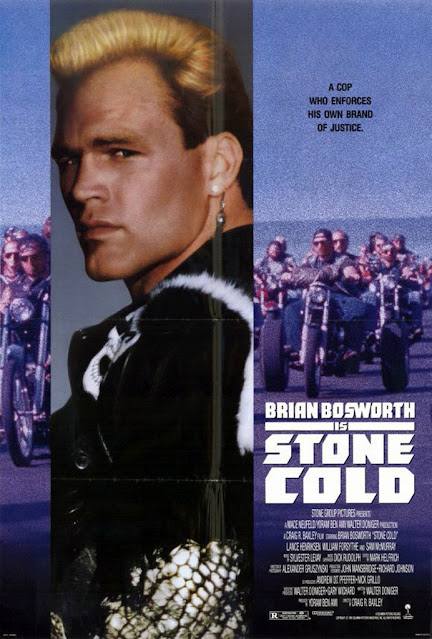 Popping a wheelie, it’s Burl, here to review a movie about biker antics! It’s an action picture from the early 1990s, which means it’s really an action picture from the 80s, as there was a bit of a lag at that time from the previous decade into the next when it comes to action! Ha ha I blame Steven Seagal for this, insofar as I think blame should be assigned at all, which really isn’t much! Still, movies like Terminator 2 and Hard Boiled helped pull the action genre into a new decade, while Seagal's works, along with today’s picture, Stone Cold, very much have the feel of late 80s shootemups!

Like Firestorm, this is a picture that tried to make an action hero out of a big husky foot-ball player, and, due to the foot-ball player being a foot-ball player and not an actor, didn’t succeed! That doesn’t necessarily mean they made a bad movie, though! (In this case anyway - Firestorm is terrible!) The pigskin pal in question here is Brian Bosworth, late of the Seattle Seahawks, and he plays a cop who plays by his own rules, has an encyclopædic knowledge of biker gang culture, loves and hugs his pet monitor lizard Fido, and wears the goofiest hairstyle ever seen on a man! His name is either Joe Huff or John Stone – ha ha, I can’t remember which is his real name and which the undercover alias, so we’ll just call him Huff-Stone!

An FBI guy played by the coroner from Jason Goes to Hell seconds Huff-Stone to infiltrate an out-of-control biker aggregation, and pairs him up with a nebbish cop played by Sam McMurray from C.H.U.D. and L.A. Story! Huff-Stone is of course a lone wolf who is less than pleased to be saddled with a partner, never mind one that’s such a flat tire; but with gratifying speed and friendliness he comes to accept his new buddy, and then sets about becoming a member of the gang! Ha ha, and how does he do it? He rolls up and more or less asks to become a member!

Well, there’s more to it than that I guess, but not a lot! Lance Henrikson from Pumpkinhead and The Horror Show plays Chains, the jerky-skinned biker gang leader, and his second-in-command is the perpetually (and justifiably) suspicious Ice, essayed by William Forsythe from Smokey Bites the Dust and Extreme Prejudice; and these fellows, along with their bearded and be-duragged army of two-wheeled miscreants, are planning all manner of mischief, chiefly the assassination of an anti-biker gang senator! They pass the time in the meanwhile by shooting at each other recreationally, or else doing other psychotically macho activities!

Craig R. Baxley, the stuntfellow-turned-director who brought us Action Jackson and I Come In Peace, was behind the megaphone here (that is, after original director Bruce Malmuth, who jodhpured Hard to Kill, was served his walking papers), and he gives it his all, ha ha! There are plenty of punchfights and budda-budda and explosions and chases, though you do wonder in the end what it’s all about! It’s well done enough that you wish it was a bit better – a little John Woo style, for instance, would have gone down a treat! But that’s just grousing I suppose, because there’s plenty of lumpenaction here to enjoy!

It’s well-loved in action circles, I should note, and it does indeed boast a zippy pace and more pep than any two Seagal pictures! The climax, in which the biker gang invades a state capitol building and machine guns nearly everybody inside, has a different resonance since those people invaded the U.S. Capitol building a year or two ago – ha ha, one can see how it might have gone down had the real-life invaders been able to plan as well as a bunch of fictional dim-bulb bikers! Fortunately the real-life people were even dimmer bulbs! I give Stone Cold two of the grossest milkshakes ever seen (but which, thankfully, in a clever fake-out, turns out to be sustenance for the lizard, not Huff-Stone)!