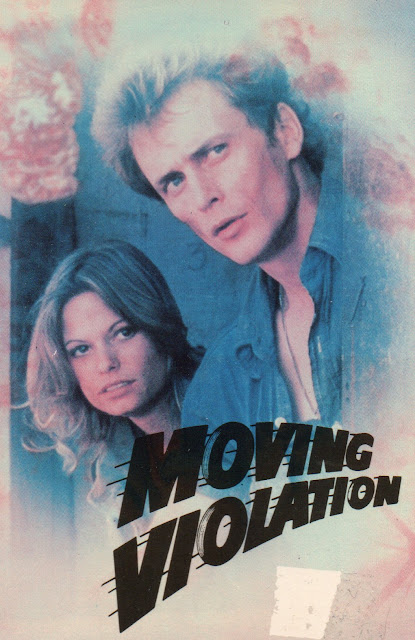 Ha ha, screech to a halt, as they say! Yes it’s me, Burl, doing my very best Viveca Lindfors from Creepshow impersonation! No, she’s not in the picture I’m reviewing for you today, but on the other hand there is plenty of screeching to a halt! Also plenty of screeching to a high speed, and around corners, and crashing through buildings and all the rest of it!
Yes it’s a car crash picture, a Roger Corman production in fact, and it’s called Moving Violation! It’s easy to mix it up with Moving Violations, a Police Academy rip-off from the 80s, but there’s one fundamental way to tell them apart: they’re quite simply completely different pictures! Stephen McHattie is the star of this movie, and he plays Eddie, a guitar-playing drifter who runs afoul of the law in some small town on the border between Arkansas and California! He hooks up with Kay Lenz, a young lass who works at the ice cream stand, and off they go to make sweet love in the back yard of a nasty rich man played by Grandpa Walton himself, Will Geer! Trouble is, the very same sheriff who gave Eddie a hassle earlier is visiting, and he chooses that time to plug his deputy full of holes! Eddie and his ladyfriend witness the killing, and then the chase is on!
It’s the sort of movie where the chase is joined by all sorts of other people, in this case mostly other cops and also contract killers hired by Will Geer! Ha ha, one of them is played by none other than the great Dick "Innerspace" Miller, and this is not the first time he’s played a killer acting at the behest of Will Geer! No, Miller played one of the riflemen Geer and Burt Lancaster hired to kill John F. Kennedy in Executive Action! Geer was an interesting guy, by the way – it’s worth reading up on him! He was pretty cool, was old Grandpa Walton!
Anyway, there’s lots of crashes and cops shaking their fists, but this isn’t just another one of the many hayseed car crash comedies that were so popular in the 70s! Here the sheriff is a full-fledged murderer, and a borderline psychomaniac if you ask me! Ha ha! The movie’s a bit like Eat My Dust crossed with Macon County Line! Another thing is that Kay Lenz, the girl along for the ride, isn’t as delighted to be part of a cross-country chase as these girls usually are! She’s utterly terrified by the situation she’s in, and is in fact driven into a near-catatonic state by it, and institutionalized as a result!
The young star of the picture is Stephen McHattie, who would go on to act in such pictures as Death Valley, The Dark and Pontypool! He also played Chet Baker in a movie because he aged to look exactly like Chet Baker, though probably not for the same reason (heroin)! He makes for a pretty odd hero in this picture, and not a very personable one I must say! But a great addition to the movie is Eddie Albert, playing a take-no-guff country lawyer! He’s not in the picture long enough, if you ask me!
It’s a pretty solid picture, with some good car crashes and a great scene with Dick Miller busting through a series of small houses as he careens down a hill in his car! The acting is pretty good across the board, and the tonal shifts are unexpected, but a welcome change from the usual good-old-boy stuff and nonsense usually served up in such concoctions! I give Moving Violation two smashed gee-tars!
Posted by Burl at 09:36