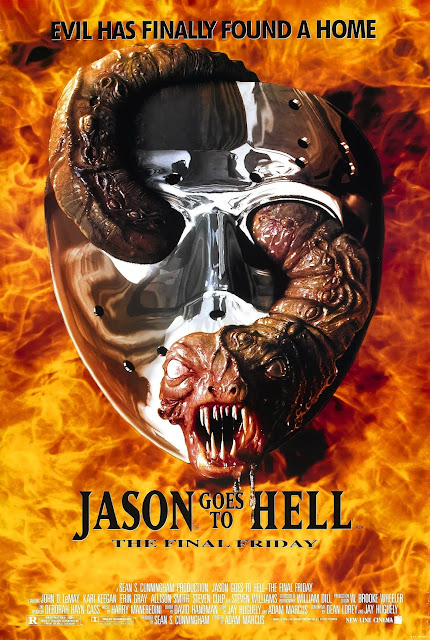 Hello all you toast pops, it’s Burl with a review of what may not have been the final Friday - ha ha, another duplicitous subtitle! - but will be the final Friday the 13th movie review by me, since I think I’ve reviewed every other one of them already, even that terrible remake-boot from a decade ago! This picture is called Jason Goes to Hell: The Final Friday, and of course it was not the final one, since there was still Jason X to come and of course Freddy Vs. Jason, which I don’t count as an entry in either series, or as a movie at all really!

This picture was the first F13 made after Paramount Pictures finished out their run with the disastrous Jason Takes Manhattan, then handed the series over to New Line Cinema, a.k.a. The House That Freddy Built! Anything New Line decided to do with it had to be an improvement, and what they decided was to ape one of their own earlier productions, The Hidden, and make it so the evil and literal heart of Jason could hop orally from body to body, just as The Hidden’s bug-alien did!

The beginning is pretty clever: a situation that seems specially designed to attract a Jason attack turns out to be just that, and the would-be victim is an FBI agent with a battalion of snipers backing her up! Jason is fired upon and finally blown to flinders, and his bits and pieces end up in the federal morgue! There a luckless coroner is hypnotized by the beating heart, and once he disgustingly scarfs it down, he becomes possessed by the murderous spirit of the Crystal Lake fiend and sets about finding some campers to kill!

Meanwhile, there are characters! I know what you’re saying: why do there always have to be characters! Ha ha! Here we stray into territory already staked out by the lesser Halloween pictures: it’s all about family, it seems, and several of the personages we meet here are Voorheeses! A helpful bounty hunter played by Steven Williams from House supplies plenty of goofy exposition, though how he has come by all this information we never find out! Our hero is a glasses nerd who is blamed for several of Jason’s crimes, and so cops, including a sheriff played by Billy Green Bush from Critters, who’s usually terrific but is here a nonentity, are chasing him down! The glasses nerd’s ex-girlfriend is a Voorhees, and so, ipso facto, is their baby!

Yes, a baby figures in, just as in Halloween 6! It’s a real cute one too, but thankfully is not placed in too much jeopardy! By the time hands come reaching out of the ground to drag Jason to hell (at least the main title is not a lie, ha ha), the baby has been rendered safe, and instead of the intimation that it will one day take up the mantle of its demented great-uncle, the finale is lumbered with a punchline that sets up the battle between Jason and a certain stripe-sweatered cash cow that would take place nearly a decade later!

I saw this picture in the theatre, as I recall, and I believe at the same cinema and with the same girl as I saw Children of the Corn II! Ha ha, it’s amazing what I subjected people to back then! Still, it’s hardly the worst of the Friday the 13th pictures: it contains a few recognizably human moments along with the gnarly gore, and there’s mild imagination on display here and there! It’s not just pokings, you see: an unpleasant diner owner played by Rusty Schwimmer of Sleepwalkers, for example, catches an elbow to the mouth, which results in an amusing and largely bloodless Special Makeup Effect making it look like she just ate the world’s sourest lemon! Ha ha! And there’s a pretty horrific meltdown too!

But a lot of it simply refuses to make sense, or to cohere in any way! One of the great virtues of the series is its simplicity: a killer stalks the night and kills campers! When they try to complicate matters it only messes things up and shows off the profound stupidity of the whole enterprise! That happens with Jason X and it certainly happens here! I’m going to give Jason Goes to Hell: The Final Friday one and a half Jasonburgers!

Email ThisBlogThis!Share to TwitterShare to FacebookShare to Pinterest
Labels: 1990s, gloop, horror, Jason, saw it on a date, saw it on the big screen, slasher, supernatural