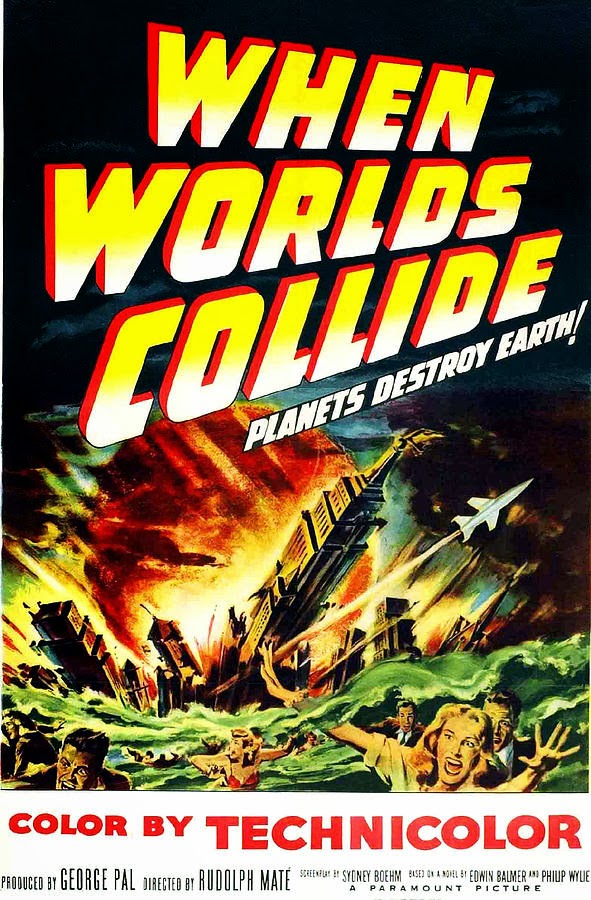 Good day, it’s Burl! Ha ha, I’m here to tell you all about the end of the world, George Pal-style! Pal is the pal who brought us The War of the Worlds, but this picture, When Worlds Collide, is an earlier and much more comprehensive tale of planetary destruction!
Right from the start this stood out from other 1950s sci-fi spectaculars, because the hero is not a scientist, nor even particularly a brain wizard! He’s a simple courier, a pilot whose job is transporting mysterious black boxes from one place to another and not asking any questions! This time, through a minor subterfuge, he finds out what he’s carrying, and he isn’t too pleased about it! Ha ha, it’s astronomical proof that the earth will within months be completely destroyed by a hurtling space-star!
The plot thickens from there! The scientists who’ve figured all this out get laughed at by the UN and some other scientists, and so they hook up with some millionaires and commence to building a spacecraft which will, everyone hopes, take them safely to a planet hurtling along in the star’s orbit! Ha ha, then there’s a gentlemanly romantic triangle right out of It Came From Beneath the Sea, and there’s lots of hand-wringing from our beak-nosed hero about whether he should go along on the spacecraft ride!
I do admit I quite liked that aspect – that he’s not really qualified to go along on the ride, and knows it, and genuinely wishes to demur from the trip for selfless reasons! Of course when he’s presented with a legitimate, if fictional, scenario in which his presence has value, he’s pretty quick to claim his seat, ha ha!
And then there’s the nasty millionaire, whose job is to be as one-note cynical as the scientists are one-note humanitarians! The resulting debates are pretty basic, but still more nuanced than I for one am used to seeing in 50s sci-fi! Less nuanced are the two score candidates for space-salvation: all of them are as lily-white as you could imagine! There’s some talk of other countries building their own spaceships, but still, a little diversity would have been pretty cool!
Still, we have nice trick effects, glorious Technicolor, and fine paintings and designs from Chesley Bonestell, whose art has graced everything from The War of the Worlds to Shellac records! The picture moves at a pretty good clip and really does feature plenty of destruction! The world really does end at the end of it, and though the handful of survivors indeed do make it to the unbelievably habitable planet, it’s still pretty grim to think of everybody else on earth perishing in earthquake, fire and flood! Yikes!
It’s a fine disaster picture, and I was glad to finally catch up with it! I give When Worlds Collide three rail-riding spaceships!
Posted by Burl at 12:01