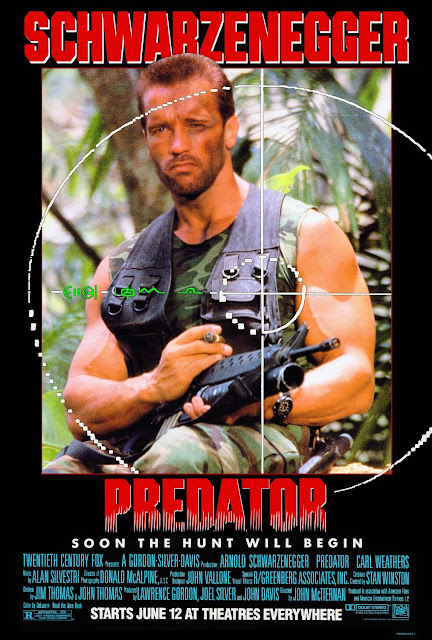 Ha ha, get to da choppah because it’s Burl, striding through the jungle with a new review for you! It’s a review of the perennially entertaining Predator, a picture I saw with my pals in the thee-atre back in the summer of 1987, the very same season as I took in The Lost Boys and The Witches of Eastwick and Robocop and Full Metal Jacket too! Ha ha, it was a full couple of months - I had to go to summer school that year, and I was working in a warehouse also, and I was trying to make a movie of my own at the same time!

But Predator was a highlight that summer because it was a real classic entertainment, and you could tell it even then! I’ve seen the picture a number of times since, and watched it again recently with my son, “accidentally” leaning on the remote control fast-forward button for the crude jokes told by the Shane Black character! Ha ha! We both enjoyed it, and I came away thinking about how emblematic certain movies can become if they’ve been built sturdily enough! I don’t think Predator is brilliant cinema exactly, but it’s such a doughty fireplug of an action movie that it seems as though it might endure and epitomize long after many other similar films have blown away into dust!

And by garr, that 80s cast! Arnold Schwarzenegger, of Conan the Barbarian fame, plays ‘Dutch,’ whose nickname obviously comes from his thick Austrian accent! (Ha ha, so many Schwarzenegger movies give him names like Ray Owens or Gordy Brewer, and I’m surprised more of them didn’t go the nickname route just to avoid that little disconnect between his natural accent and his character's name!) Dutch has been asked by The General, played by none other than the excellent R. G. Armstrong from The Beast Within, to take his team into the jungle and try to rescue a cabinet minister whose 'copter has been shot down! Carl Weathers, ‘Action’ Jackson himself, will come along whether Dutch and his biceps like it or not! So ordereth The General!

Dutch’s team includes the likes of Bill Duke, who starred with Arnold in Commando and Jesse ‘The Body’ Ventura, who met him in The Running Man! There’s also Sonny Landham from 48 Hours and Richard Chaves from Witness, and of course the jokester played by Shane Black! Elpidia Carillo from Beyond the Limit pays an ill-defined lady who just sort of turns up, and who is later directed by Dutch to get to the choppah!

But what’s all the trouble about, you might ask? It seems a spaceman has dropped to Earth from another planet, here for a vacation and a spot of hunting! Ha ha, and what he enjoys to hunt are not elephants or badgers, but human army men! Kevin Peter Hall, who also played the interstellar hunter in Without Warning, essays the role of the alien, who is fairly humanoid except for his goochy bug face! And of course he sports a natty set of dreads, ha ha!

The pace is a little stately by current action movie standards, but I think it works perfectly; and the action scenes, when they come, are satisfying and 80s-enjoyable! Alan Silvestri contributes a top-notch score, the jungle cinematography is excellent, and the script is not as stupid as it easily might have been! Ha ha, it gave me a good time at the movie thee-atre, so whenever I pull the DVD out and start to watch it again, I greet the movie like Dillon greets Dutch! I give Predator three cabinet ministers from this charming little country!

Email ThisBlogThis!Share to TwitterShare to FacebookShare to Pinterest
Labels: 1980s, action, aliens, saw it on the big screen, Schwarzenegger, sci-fi