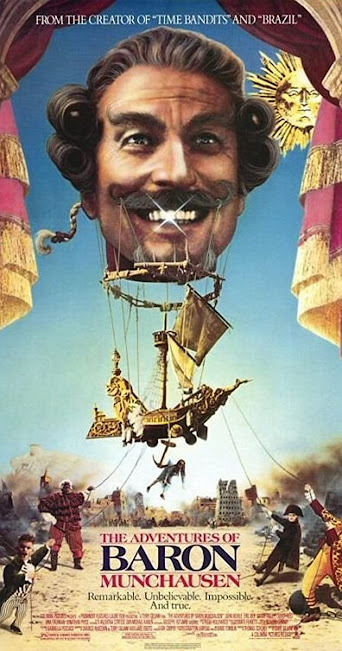 From beneath a speeding cannonball, it’s Burl, here to review a lavish fantasy from the brain of Terry Gilliam! Ha ha, this is the picture that, so far as I can tell, was Gilliam’s first real Troubled Production, and when you hear all the stories about it, you wonder how it could possibly ever have been finished and released! But it was, and it emerged into the world under the title The Adventures of Baron Munchausen! (Of course Brazil was Troubled too, but only in post-production, I believe!)

It’s a picture that cost a big bag of samoleans, and you can tell just by looking at it! Ha ha, I was lucky enough to see it on a big huge screen at a beautifully appointed cinema in London, and I remember being a little disappointed with it! I thought it was pretty spectacular, visually speaking at any rate; but I had seen Brazil a few years earlier, also in London, and with Gilliam present to make comments and answer questions, and that of course was a marvelous treat with which the newer movie could not compete! I finally watched it again last night and was very curious to see how it would play this time around!

The story, you ask? Ha ha! We begin in a city under siege from the dreaded Turks, and there among the blasting cannonfire we find a theatre company putting on an elaborate show about famous balderdash artist Baron Munchausen! What do you know, the real Munchausen shows up, played by John Neville from Spider and Urban Legend, and he’s put out by the play’s distortion of what he claims are the real facts about his life! He begins telling the tale of his four superpowered friends, or servants, or whatever they are, and how he escaped the Sultan’s headsman thanks to the speedy feet of Eric Idle! Then he’s off on an adventure to gather up his old super-quartet and defeat the Turk before the city is fully trampled beneath his cruel sabah!

Sarah Polley from Blue Monkey and eXistenZ plays a little girl stowaway who joins him on this series of adventures, which include an array of cameos from such performers as Oliver Reed from Spasms, erotomaniacally playing Vulcan, the Roman god of fire; Uma Thurman from Mad Dog and Glory, appearing nude on the half-shell as his wife Venus; Valentina Cortese from When Time Ran Out as the Queen of the Moon; and Robin Williams, or “Ray D. Tutto” as he’s billed here, who is of course well known from Club Paradise and who plays her husband, the King of the Moon! Other familiar faces include Jonathan Pryce from Tomorrow Never Dies as a despicable bureaucrat, Bill Paterson from Comfort and Joy as the actor playing the Baron, and Peter Jeffrey from The Abominable Dr. Phibes as the Sultan! And the Baron’s amazing quartet are played by Gilliam’s Python-buddy Idle; his co-screenwriter Charles McKeown, who also appeared in Spies Like Us; big Winston Dennis from The Commitments; and Jack Purvis from The Dark Crystal as a big-eared blowsman!

It reminds me a lot of Time Bandits, with its child hero on a strange, episodic journey, lots of eccentric characters played by familiar faces and at least one Python, kooky homemade trick effects, giants, midgets, and a scene in which the characters are trapped in an iron cage hanging in a void! The circus-like, Italianate atmosphere comes naturally, given that Gilliam hired some key Fellini collaborators to help him out! Cinematographer Giuseppe Rotunno, known as Peppino to his friends, and designer Dante Ferretti give the picture a pretty and always compelling atmosphere. and there are plenty of nice miniature trick effects to admire!

But the Time Bandits comparison also reveals some flaws! The story here is less compelling, the characters weaker, the themes and satire duller and more abstract, and, reflecting the sharp increase in budget from the earlier picture and the shift in company from Handmade Pictures to the vast and unfeeling Columbia, the movie seems altogether less handmade than its predecessor! Still, there’s plenty to enjoy: the trick effects are terrific, the cast game, the imagination delightful and abundant! As an inquiry into the nature of truth, it doesn’t get far, but as an epic amusement it’s firing on most, and occasionally all, cylinders! I give The Adventures of Baron Munchausen two and a half-shells! Ha ha!
Posted by Burl at 09:23