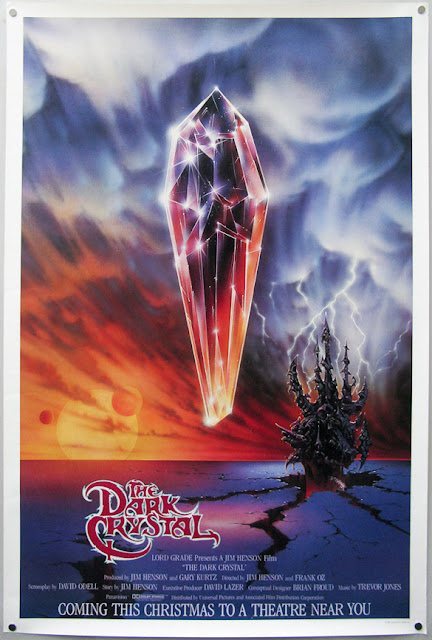 Clik-clik-clik, it’s Burl, here to review a Muppeticious movie from the early 1980s! Ha ha, back around Christmas of 1982 I saw this picture in the theater with my little brother, and I seem to recall him literally hiding under his seat for a good part of it! The picture is The Dark Crystal, and I had a chance to see this one again in the theater again just recently, this time with my young son! He’s just four, but had no trouble with the scary scenes at all, and wait until I tell my brother about that! Ha ha!
The movie is all puppets all the time, except for a few location long shots where it’s people dressed up as puppets! But most of it is in the studio, in the muppety alien world designed by Brian Froud and ruled by the evil Skeksis, who are a bunch of ragged gooneybirds! Some distance away live their counterparts, the Mystics, a race of gentle bignoses who, ha ha, spend the best part of the movie trudging! And then we have the heroes, humanoid youths of the Gelfling race named Jen and Kira!
Jen, apparently a male Gelfling, is informed that his destiny involves a journey and something to do with a chunk of crystal, but the specifics of his mission remain maddeningly vague! He’s on his way to the Skeksis castle, to do he knows not what, and in constant pursuit are the huge beetle bugs that act as the Skeksis’ soldiers! He meets up with a squishfaced old wizardress named Aughra, whose resemblance to Yoda is surely coincidental despite her being performed by co-director Frank “An American Werewolf in London” Oz! Ha ha! Well, the nonsense plot eventually comes to a climax, and the crystal does its thing, whatever that is! Beams of light and so forth, ha ha!
Jim “Into the Night” Henson, the other co-director, brings a muppety goodness to the whole affair while not shying away from unpleasantness! There’s lots of ugly stuff in the picture, particularly when it comes to the Skeksis! There’s some felted silliness also, no question, but it’s got a gritty fantasy flavour that really works while the picture is running, but, at least for me, and apparently for my son, doesn’t encourage repeat viewings!
The look of the thing is the real draw, with its photography by the great Oswald Morris (his last film!) and the fantastic sets! Ha ha, Aughra’s laboratory, with its big spinning universe thing, is a particular delight! There are some fine voice talents too, like Billie Whitelaw from Night Watch and Hot Fuzz, Barry Dennen from The Shining and Trading Places, and, would you believe, none other than Thick Wilson from Sex With the Stars and Bullies! Ha ha, Thick Wilson!
The picture is an achievement, that’s for sure, but there’s something unappealing and unmemorable at the base of it! It’s sort of generic, I think, in a number of crucial ways! All these puppets and all this wonderful craftsmanship should have been in the service of a story that really pushed some boundaries! But it doesn’t! In the end, I’m going to give The Dark Crystal two toothy fuzzballs!
Posted by Burl at 10:51

Email ThisBlogThis!Share to TwitterShare to FacebookShare to Pinterest
Labels: 1980s, family, fantasy, saw it on the big screen