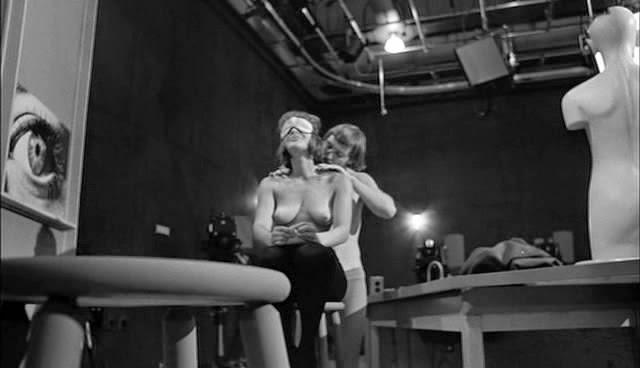 Ha ha, the motion picture case under study this meridian unit is a sixty-two minute celluloid aggregation presented in a ratio of approximately 1:1.85 and projected at 24.17 frames per second! The title is simply Stereo, and it represents the earliest attempt at a feature-length, or anyway nearly feature-length, picture by David Cronenberg! Ha ha, he’s the director best known for Fast Company, which this film does not resemble!
Well, ha ha, I’m not sure I can summarize the plot of Stereo for you! It’s not a plot-based picture! But it takes place in some Canada of the future, in which, we are asked to accept, a “Canadian Academy of Erotic Enquiry” has been established! This cerebral future time is characterized by the appearance of psychics into the population pool! The psychics have all been rounded up so that someone called Dr. Luther Stringfellow can perform sexual experiments on them! Meanwhile, a fellow in a black cape strides about and makes fish faces at everything he sees! Ha ha! A few different voices sort of explain for us what’s going on, and we hazily recognize that there are concerns with the sexy-psychic program, but ultimately, we learn, so much information has been taken in through the experiments that it will take months to analyze it all and figure everything out! Ha ha, no kidding!
It’s virtually a silent film, with only the sporadic and impenetrable narration to engage our ears! Cronenberg manages some striking black and white images, such as the upside-down silhouette lady and many fine architecture-based compositions! Then there are scenes where men kiss men and ladies, ladies! Ha ha! It gives the picture a modern feel, and, given the times in which it was made, marks an early instance of Cronenberg reaching out very deliberately to push buttons! Ha ha, that’s why he’s great!
Stereo is juvenilia for certain, but worth a look! It might drive you a bit crazy, but you’ll be the better person for watching it, I think! It comes across as parody sometimes, but it’s chock full of intriguisms in the same was as, say, Waking Life or something! But of course they’re delivered in a rather underbaked way! It’s a grad student film and no mistake, ha ha! In the wrong mood you’ll find it something of a ponderosa, but still, I give Stereo two hearty helicopter landings!
Posted by Burl at 21:50