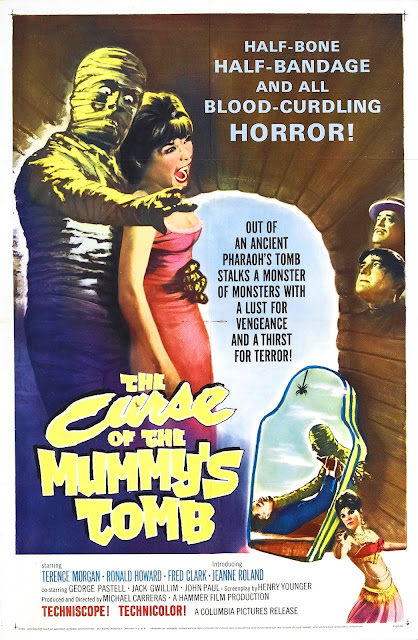 All for the love of bandages, it’s Burl! Ha ha, clomp, clomp, yes, I’m reviewing a walking mummy picture today, a Hammer walking mummy picture to be more precise! To be more precise still, it’s The Curse of the Mummy’s Tomb! Ha ha, I don’t think I’ve reviewed many Hammer pictures for you, but ol’ Burl’s a longtime Hammer cheerleader! I even gave a lecture on their doings once at a special illegal restaurant!
Now, this was hardly the only walking mummy movie the company made, but I don’t think they made many! It begins, as all walking mummy movies must, in Egypt, at an excavation made by Europeans who feel it’s their right to dig stuff up and cart it all back to their own country! Ha ha, the mere suggestion that maybe these colonialists should keep their mitts off is met with bewilderment, scoffing and supercilious anger! So of course it takes a curse to sort things out!
This takes effect back in England, where our Egyptologists - Annette Dubois, her fiancé Ronald Howard, and dyspeptic old Sir Giles, plus an all-too American promoter-type fellow - meet a mysterious aristocrat-with-a-secret called Adam Beauchamp, who insinuates himself into the group and most especially into the heart of young Annette! Soon we hear the beat of the cloth-wrapped feet, ha ha, and there are several genuinely frightful sequences featuring the attack of the walking mummy! He even stomps one fellow’s head, as walking mummies frequently seem to do! (I particularly recall one such happenstance in Dawn of the Mummy, which of course was part of the Great Walking Mummy Revival of the early 1980s, along with The Awakening and Time Walker!)
Something you will notice as you watch the picture is that none of the principals are played by the usual Hammer stars - no Cushing, no Lee, not even an Andrew Kier or an Ollie Reed or a Barbara Shelley or an Ingrid Pitt! We are reassured that it is indeed a Hammer film when we see Michael Ripper, whom we remember from X the Unknown, in brownface as a victim-to-be, ha ha! The lead actors, in fact, are almost all people who’d never been in a Hammer film before, and were never in one after! Ha ha, curious!
The Curse of the Mummy’s Tomb has its spooky moments, as noted, and the walking mummy itself is pretty creepy! It’s a mildly enjoyable picture on the whole, but there’s really not a lot to it, and it breaks no new ground in the walking mummy genre! To accuse it of lacking pep might be to ignore a fault endemic to the form, so I’ll just say, ha ha, that The Curse of the Mummy’s Tomb is a minor work, but not the worst walking mummy picture to amble around the pike! I give it one and a half enchanted amulets!
Posted by Burl at 10:10