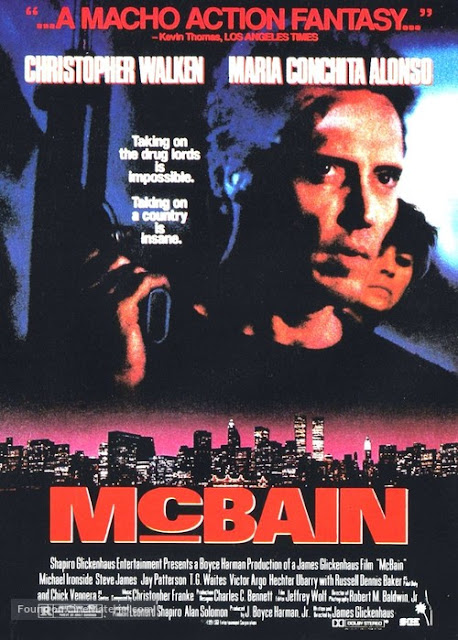 With a blast of action, it’s Burl, reviewing for you a movie that was apparently made within the exceedingly narrow window in which Christopher Walken was considered a potential action hero! (I don’t really count The Dogs of War as an action movie; more a drama with some action in it!) Ha ha, this one is called McBain, and it comes to us from action-uncle James Glickenhaus, the fellow who made that seamy picture The Exterminator and slightly less seamy efforts like The Protector and Shakedown!
Now of course I hear you saying “Ha ha! McBain! How does Ranier Wolfcastle do in the picture? Is he a good actor?” Well, not so fast! This is a different McBain entirely, with, as mentioned, Christopher Walken as the titular star! And the assumption that he’s not really action-hero material is borne up in the picture’s opening moments, which find McBain in a thunderdome in Vietnam having the tar beaten out of him! The timely arrival of some other soldiers saves McBain from his fate, and, when McBain asks Santos, the leader of the patrol that saved him, how he can ever properly thank him, Santos rips a hundred dollar bill in half, gives it to McB, and says “Ha ha, if the other half of this bill ever finds its way to you, then you will know it is time to repay me!”
Well, nineteen years later, McBain is working the same job Edward James Olmos did in Wolfen: welding at the top of the Brooklyn Bridge! Santos, meanwhile, is the leader of a group of Columbian rebels seeking to take down corrupt El Presidente, and when the revolution fails and Santos is killed, his girlfriend Maria Conchita Alonso comes climbing up to hand McBain the other half of the C note! McBain doesn’t hesitate: he rounds up the old gang from ‘Nam and, after some marvelous business in New York, they head down and take over Columbia! Ha ha!
The marvelous stuff in New York involves their attempts to raise money for the trip! First they break into a low-level drugs den and kill people left and right! Luis Guzman, well known from Innocent Blood, is in charge, and when he sees the mercenaries have shot most of his men, he delivers a righteously shame-inducing speech to an abashed McBain and his gang! They find a much richer gangster, hang him off a building and pretend to be rogue Mossad agents until he agrees to give them money! Ha ha, Walken playing a steelworker-turned-mercenary playing a tough Israeli is a thing to behold, all right!
Chick Vennera, who had been involved in this kind of thing before in High Risk, does a good job as Santos! It’s a shame when he’s shot in the head by El Presidente, who, by the by, is played by Victor Argo from Ghost Dog: The Way of the Samurai! None other than the always-likeable Steve James from Avenging Force, and the less-likable but no less fantastic Michael Ironside from Watchers and Total Recall, are members of the buddy gang, along with Thomas G. Waites from The Thing; and Jay Patterson from D.O.A. plays the one who’s a doctor, and who miraculously saves a gravely injured girl in the third act! And we know female lead Maria Conchita Alonso from her work in Extreme Prejudice!
But after all this, is McBain a good movie! Ha ha, no, not really, but, against the odds and in contrast to most of Glickenhaus’s other pictures, it’s a strangely good-natured one! Ha ha, you’ve got the child being saved, and the fact that, though hundreds of people are killed, all of the mercenaries make it through happy and unscathed!
On the other hand, the movie’s politics are so demented as to be unreadable; and it's replete with the sort of stupidity that takes you out of the drama and leaves you scratching your head! Take, for example, the scene when McBain and his crew are buzzing down to Columbia in a twin-engine prop plane and are suddenly joined by a Columbian fighter jet! After the old “Sorry, our radio's busted” trick, McBain, in the co-pilot’s seat, pulls a gun, shoots it past his pilot’s head, through the window without breaking it, across to the fighter jet, through that cowling without breaking it, and into the pilot’s head! Ha ha, talk about a magic bullet!
I think by now I’ve said enough about McBain! It’s got lots of explosions but it’s rarely exciting, and somehow, though it’s called McBain, Walken’s character barely seems to be the lead! I give McBain one and a half bamboo thunderdomes!
Posted by Burl at 11:01