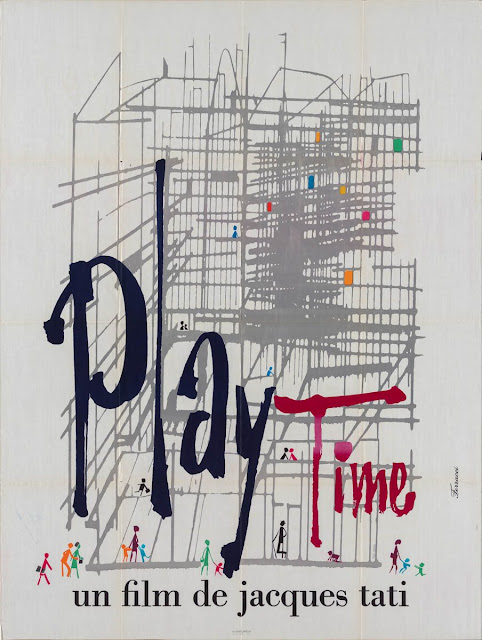 Allez-vite la twist, c’est Burl! Ha ha, I’m here to review what’s probably one of my most favourite comedies, Jaques Tati’s crazy-crazy Playtime! This is a real humdinger, a spectacle of a show, and I first saw it many years ago in a film class, on a reasonably large screen! And the bigger the screen, the better with this one! I know it got a bit of a revival a few years ago, but I’d like to see this one grace the big screens again, alongside other revival staples like Gremlins and Ghostbusters!
But hélas, I fear that will never be, because Playtime was a big fat old bomb when first it was released! It’s sad but true, and perhaps the fact that it has absolutely no plot had something to do with this flame-out! But Playtime has no need of a plot, ha ha! All it needs is gags and plenty of time for them to play out, and that it has, three times filled and running over!
Our non-story is set in Paris, or at least in an artificial modernist Paris constructed somewhere on the outskirts: the area is full of American tourists being shepherded here and there by a legion of minders; the only glimpses of Paris landmarks we see are reflections in glass doors: an Eiffel Tower here, a Sacré-Coeur there! Among the tourists are old ladies, a pretty young woman called Barbara, who serves more or less as our main character, and a loudmouthed drunk who wants to buy everybody drinks! There is also Tati playing his famous Chaplin-esque character M. Hulot!
Oh, I’m fond of Hulot! He’s one of the most genuine naïfs in cinema, even as he looks like an everyday late middle-aged white guy! He’s a bit rumpled, which means he stands out sharply in the steely world of Tati’s fake Paris, but so do all the other lookalike Hulots with which Tati has generously sprinkled his film! Ha ha, I guess he was getting a little tired of the character, but for us, a little more of the genuine article would not have gone amiss!
Ha ha, and so many great gags, many stemming from everyday items acting as agents to undermine the modern way of life they represent! The chairs in the waiting room, the long hallway, the door at the restaurant, the roundabout outside, and my favourite, the labyrinth of cubicles and the woman in the turning booth! Ha ha, you’ll know that one when you see it! And the subtleties sometimes are beautiful! Think about “Slam Your Doors In Golden Silence,” ha ha - most filmmakers try to get a laugh by adding a sound effect, while Tati is one of the few who can achieve hilarity by taking one out!
It’s a movie that demands, and equally rewards, multiple viewings! It seems designed to require multiple viewings, in fact: it’s impossible to watch the picture without occasionally feeling that you’re completely missing a good joke! And you probably are! New gags reveal themselves with each fresh look; it’s incredible - you can perhaps see in this a diabolical salesmanship on Tati's part: make three times the box office just based on everybody going back to look for the jokes they missed the first or second times!
Ha ha, if you need a laugh about our crazy modern world, this is the movie to watch! Its observations have only become more relevant in the years since it was made, even as the world itself seems to have gotten uglier! Sure, without proper characters or plot, it can be somethingt of an alienating experience; you never get closer to understanding the characters than to feel a basic human empathy for their various plights! But ultimately you still walk away with a greater understanding of what it means to be human! I give Playtime three and a half shouting security panels!
Posted by Burl at 00:22

Email ThisBlogThis!Share to TwitterShare to FacebookShare to Pinterest
Labels: 1960s, comedy, France, oddball, saw it on the big screen