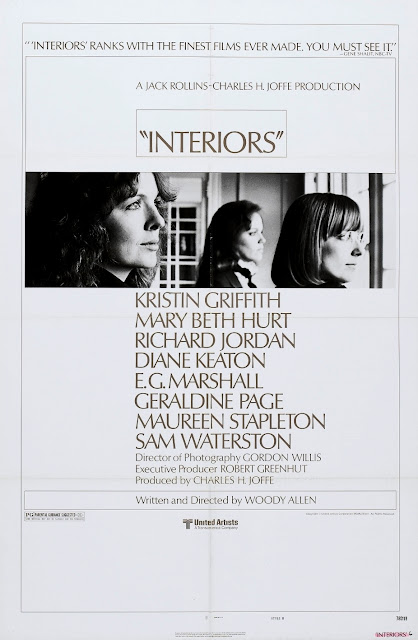 Uht uht uht, it’s Burl, here with a movie that is not Woody Allen’s funniest, but turns out to be a pretty accomplished piece of work nevertheless! Ha ha, I wasn’t sure what to expect, because the word on it was (I thought) pretty bad! But most of the contemporary antipathy for it came from, I believe, a Dylan-at-Newport sort of reconfiguring a percentage of the audience felt was being forced on them! There were more than a few resentment-fuelled reviews out there, I think!
But the picture certainly has been reassessed with the wider view offered by the many years that have passed since its summer-of-’78 release! I finally saw it for the first time the other night, and it seemed at once like an earnest, beautifully-appointed drama in the Cheever style! You might call it the Cheever-Ross style, though these characters are as Anglo-Saxon as can be! It’s an extension of the Hall family from Annie Hall – or a regression, given that the family in Interiors is just the sort of family the Hall Family were parodies of!
The family in question is a well-off bunch consisting of three sisters, Renata (Diane Keaton from Harry and Walter Go To New York), Joey (Mary Beth Hurt from D.A.R.Y.L.) and Flyn (Kristin Griffith from King of the Hill)! The parents are Arthur (E.G. Marshall from Creepshow, ha ha) and Eve (Geraldine Page from The Rescuers), but they’re not together for long, as Arthur has decided that he’d like to go off on his own for what he calls a “trial separation!” Ha ha!
This causes shock waves through the family, but none more destructive than to the fragile Eve, whose bland, ascetic interior designs provide the literal half of the title’s meaning! She’s a lady with a past full of emotional turmoil and suicide attempts, and the departure of Arthur, who clearly means it to be permanent, inches her ever closer to the deep end – to the deepest end, in fact! The daughters, who are varying degrees of self-centered, meanwhile deal with their own tribulations: a creative block for poetess Renata; creative unfulfillment for actress Flyn, and a total lack of talent coupled with enough self-awareness to realize that for Joey, who is also the one tasked with keeping a resentful eye on Eve!
Two of the ladies also have husbands, ha ha! Renata is coupled with a bearded novelist who is wrestling with his own creative demons and a monsterous dose of self-pity; this fellow is played by the late Richard Jordan, whom we recall from Dune, The Mean Season and The Hunt for Red October! Joey is married to Sam Waterston from Crimes and Misdemeanors, who seems relatively problem-free aside from the mutual dislike he shares with flaky Eve!
Ha ha, the finality of Eve’s marital crisis is confirmed when Arthur brings home a lady he intends to marry, a bright-eyed widow played by Maureen Stapleton from Summer of ’42 and The Money Pit! This is a fascinating character who could easily, too easily, have been made a caricature, but Stapleton’s performance resists this most impressively! In fact all the acting is excellent, as is Allen’s Ingmar Bergman-like direction and Gordon Willis’s bleak beachside cinematography! The writing, on the other hand, sometimes verges on the edge of parody, or at least some sort of experiment by which a Bergman picture has been transplanted to New York and environs! These are some pretty self-involved people ha ha!
Finally, however, I enjoyed it a great deal more than I expected to! It fits into that category of pictures into which I also placed such salamanders as The Last Married Couple in America and It’s My Turn, though this is altogether better! I give Interiors two and a half signs of strain!
Posted by Burl at 20:28