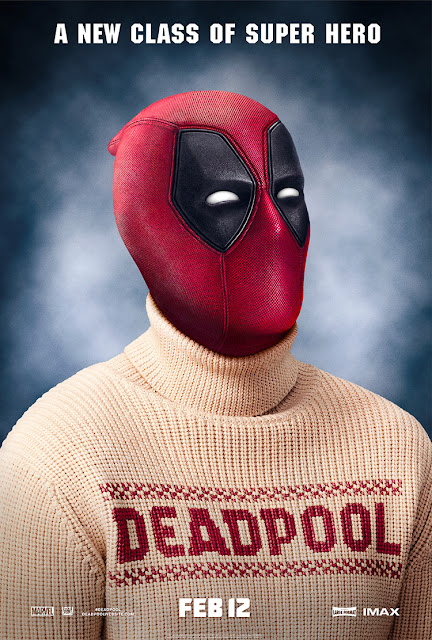 Ha ha and hello, it’s Burl to review the new smash hit! Now I’m not the biggest fan of the superhero movies, and in fact you might more properly say I’m not a fan at all! Deadpool, the movie under review today, while very definitely a standard-issue superhero picture in most ways, at least takes the trouble to make fun of the genre and its irritating sense of self-importance, so I have to say I enjoyed it much more than, say, The Avengers! (I tried to watch The Avengers: Age of Ultron, and couldn’t even make it through the first shot before shutting it down! Ha ha!)
Deadpool is a superhero I was previously unfamiliar with, though he looks a little like Daredevil and a bit like Spider-Man! His shtick, apparently, is to repeatedly insist that he’s not a superhero at all while all the time looking and acting exactly like one! He’s also a real killer! He shoots people with his popgun or else puts a poking on them with his swords! But who is this superhero, you might ask? Well, this movie presents us with his full tale of woe!
Apparently he’s a sardonic fellow named Wade Wilson, an ex-supersoldier who hangs out at a fight club and does tasks for people which resemble the good deeds done by Repairman Jack in the book series of that same designation! His best gal is a L*dy of the Night and his best pal (played by T.J. Miller from Our Idiot Brother) is evidently an escapee from Secret Window-themed improv comedy group!  But of course all this is not flashy enough for the superhero genre, so first Wade has to get the dread disease cancer, then have this affliction cured by some sort of nonsense process offered him by obvious bad guys! This involves various forms of torture, after which, hey presto, he’s a superhero! It’s explained that he’s now essentially invulnerable, but on the downside he looks a little like Pizza the Hut from Spaceballs!
So his mission now is revenge on the people who turned him into an ugly superhero, and he’s meanwhile got to dodge two minor members of some superhero club who would like him to join! For some reason he lives with a blind lady played by Leslie Uggams from Poor Pretty Eddie, and all these two do is insult one another! Ha ha! Eventually it all comes to a climax – a typical but relatively low-key climax for this sort of thing – at a shipyard!
Now, this is a pretty entertaining picture, with lots of funny jokes and stuff, but it’s got lots of problems too! It supposes itself to have a sturdy emotional core, with the love story and the hero’s idea that having a face like a griddlecake is an impediment to that love! But the characters, when they’re together, speak like improv comedians, and there’s not an ounce of sincerity between them! In no ways did they or the bartender pal character ever seem like real people! The flashback structure just makes the movie seem like it’s spinning its wheels narratively, and the repeated fourth wall breaking, while occasionally clever in the moment, is neither innovative nor sufficiently cutting! The action scenes are merely okay, and scattered rather parsimoniously through the picture! Ha ha!
With all that said, I enjoyed it a lot more than most of the other superhero pictures I’ve seen in the past decade! The big silver guy was pretty funny, and his uptight remarks perfectly timed! But I think as the series of films progresses they will necessarily become more and more generic even than this one: overtaken and subsumed into the silly universe within which all these pictures apparently exist! I guess he’ll team up with Bat-Man next, or Spider-Man, or just stick with the big silver guy and his moody consort! I don’t pretend to know! For now, I give Deadpool one and a half Negasonic Teenage Warheads!
Posted by Burl at 10:41