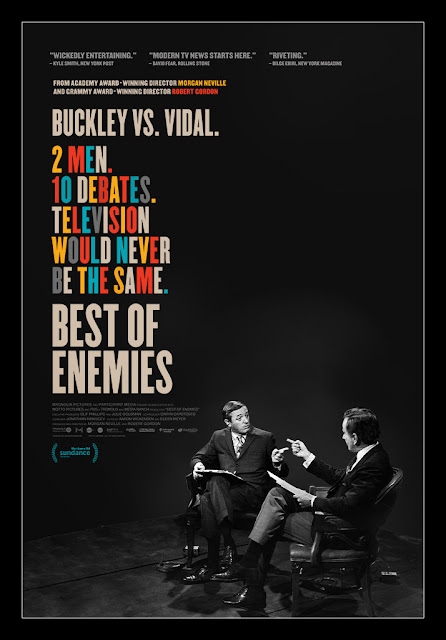 Ha ha and bon mots, it’s Burl, with a review of a documentary that presents us with the full story of the non-friendship between Gore "Shadow Conspiracy" Vidal and William F. Buckley Jr.! The picture is called Best of Enemies, and like any decent doc it manages to give us a nice, polished version of not only that story, but of the situations and events that surrounded it!
Ha ha, and that’s a pretty appealing prospect for ol’ Burl, since the times in question – it’s the late 1960s, we’re talking about here – and the political and social events occurring within them are of special interest to me! I also once met a fellow whose job was to cat-sit Vidal’s felines! Yes, this poor soul had to go live in Gore Vidal’s spectacular Italian cliffside villa, of which we get glimpses in this movie, and live there for four or five months at a stretch, his most onerous duty to feed the great man’s cats while Vidal was off living in New York or somewhere! Ha ha, pretty sweet deal!
I can’t say I have any such tenuous connection to Buckley, which suits me fine because frankly I never much liked the guy, ha ha, and probably wouldn’t have cared for his catsitter neither! So I’ll happily admit my sympathies were overwhelmingly with Vidal in the great tête-à-tête featured in this picture! And of course the contretemps in question happened over a series of debates during the Republican and Democratic conventions of 1968, during which the ABC network, unable to cover the conventions the way the other more monied networks did, hired these two high-toned palaverers to debate the issues of the day!
Their debates mainly ended up as exchanges of erudite trash-talk, ha ha! Vidal was better at this, though Buckley, despite merely being smart and not the towering intellectual giant he believed himself to be, manages many full-throated runabouts that demonstrate a quick wit, but never, unless I blinked and missed it, a great deal of depth! Ha ha! I guess that’s the pitfall when you’re trying to mount an intellectual defense of an ideology that by its nature resists such defense!
Of course this all leads up to the famous blowup which took place in the ninth of the ten scheduled debates, held in Chicago while police and protestors engaged in a full on, if rather one-sided, war on the streets outside! Buckley found himself pushed just that much too far when Vidal called him a “crypto-Nazi,” and instead of responding with a passionate rebuttal explaining just exactly why he wasn’t a crypto-Nazi – and I for one would have been curious to hear such a rebuttal – growled “Ha ha, listen you queer, stop calling me a crypto-Nazi or I’ll sock you in your goddamn face and you’ll stay plastered!”
Well, this insulting, threatening utterance was the climax of the debates, and framed the relationship between the two men for the rest of their lives, and not incidentally helped father a terrible era of insult journalism which we still suffer today! Ha ha, it’s really too bad! But this is an entertaining picture, and does a nice job setting the context , and remains even-handed in its treatment of the protagonists! The set-up is a bit laborious if you already know anything about these guys, but that’s to be expected I guess! And it maybe goes a bit hard on milking the drama of the Buckley’s meltdown, but that’s equally to be expected! The only other major problem is that we have to look at and listen to that patrician reptile Buckley a lot more than I’d have cared to, but that’s part of the price of the ticket, ha ha! I give Best of Enemies three collapsed ceilings!
Posted by Burl at 22:35