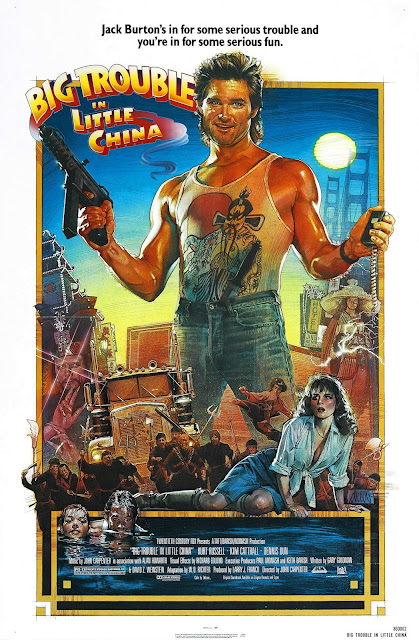 Ha ha, this is ol’ Burl talking at you from the Pork Chop Express, here to tell whoever’s listening that John Carpenter’s Big Trouble in Little China, the picture he made right after Starman, is still one of the most enjoyable movies the 1980s ever produced! And, ha ha for a guy like Burl that’s saying a lot! Yes, I remember going to see this one in the theater with my good pal Carnee! We watched it, then, as the lights came up and the end credits scrolled, Carnee and I just looked at one another and without a word settled back in our seats to wait for the next screening! Ha ha!
And guess what! Just the other day I saw it in the theatre once again! Ha ha, that’s right, it was screened along with a bunch of other elderly movies (including The Dark Crystal), and I was there! It was legitimately fun to see the gosh darn thing with an audience – a far bigger audience, I might add, than I saw it with in its original flop release! Ha ha!
Of course it’s the story of hapless tough-truckin’ hombré Jack Burton, played by Kurt Russell from The Mean Season, who gets mixed up in the subterranean craziness of San Francisco’s Chinatown! Along with pals played by Dennis Dun and Victor Wong from Prince of Darkness, and an overly spunky gal played by Kim Cattrall from Porky’s, Jack sets forth to rescue a comely maiden with green eyes from the ancient cursed wizard Lo Pan, essayed by James Hong from Blade Runner! Ha ha, that was a plot rundown for any poor fools who haven’t seen this picture! Let me assure you, it’s worth it!
Now, this is a king-fu fantasy picture, and while it didn’t break any new ground with the fight scenes, and I’ve always thought they could stand to be more kinetic, they’re fun and well-done! With the exception of Kim Cattrall, who seems to be trying on a spunky 1930s screwball heroine persona (the better, perhaps, to snag a role as Indiana Jones's next girlfriend), the performances are perfect for the job! Special mention must be made of Russell, who walks the perfect line between the Duke and a dunce! Victor Wong is also a pure-d delight in the role of Egg Shen, tour bus driver, San Francisco Chinatown! Ha ha!
It’s a shame this picture failed at the box office! But on the other hand, maybe it’s not! Perhaps this is part of a select coterie of pictures, among whose number I might include The Adventures of Buckaroo Banzai, Lifeforce and other big-budget goofnugget-supremes, which are terrific on their own and could only be injured by the existence of some lame attempt to recreate their particular magic in a sequel! I used to want someone to make Buckaroo Banzai vs. the World Crime League, but now I’m not so sure! Anyway, John Carpenter doesn’t have a great record of sequelizing his own stuff anyway – just look at Escape From L.A.! Even Halloween II’s no great shakes!
Well, this picture has its faults, but while I’m watching it I hardly notice them! That’s because it’s just so gosh darn marvelous an experience! It’s got pretty 80s trick effects from the gang who provided Ghostbusters with the same; it’s got laffs, action, and monsters; and it spends plenty of time knocking out the props from under its putative hero, who doesn’t actually do very much that’s particularly heroic! Ha ha, during the climax he shoots his gun at the ceiling and is knocked out by the falling masonry that results; so really the picture is pointing and laughing and kicking sand at the whole concept of the tough-guy hero, which is a-okay by ol’ Burl! This is a perennial good-time picture and a personal favourite, and I give Big Trouble in Little China three and a half six demon bags!
Posted by Burl at 22:01