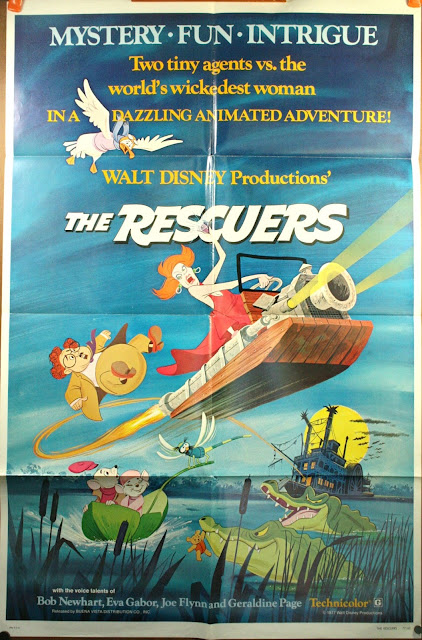 Good day, it’s Burl here with another Disney picture to tell you about! Ha ha, this one, The Rescuers, isn’t quite in the Disney Classic category alongside Dumbo – no, it came along during a period in which the company was maybe floundering creatively a little bit! Old Walt was ten years in the cryonic chamber at this point, and the House of Mouse was putting out things like Pete’s Dragon and Candleshoe and Herbie Goes to Monte Carlo! It’s not that those are bad pictures, but they’re no Superdad, ha ha!
Anyway, along with the Herbie picture, The Rescuers was their big summer release of 1977, and I can only imagine that both were swallowed whole by Star Wars, ha ha! But if The Rescuers did poorly at the box office, it was probably just as much because, speaking frankly for a moment, it’s not all that great! The narrative is pretty baggy, the characters thin, the songs unmemorable and the action repetitive! It occasionally looks nice though, and I’ll try to list some of its other attributes as well!
We open with a sad little girl, Penny, tossing a message-in-a-bottle off an old riverboat! This note is found by an international society of mice dedicated to helping people in trouble! A novel enough concept, certainly, but it seems like almost any of this society’s other adventures would surely be more exciting than the one we are to be given!
This is kind of a running theme! The mouse agents chosen to rescue Penny from her dilemma are Bernard, a stammering janitor-mouse voiced by Bob “Catch 22” Newhart, and Miss Bianca, the Hungarian delegate, played by Eva Gabor! Both do a fine enough job, but one feels that any other two agents might have been picked instead, and they would be at least as good or better!
And what is Penny’s dilemma? Ha ha, well, she has quite a few! She’s a poor orphan girl, and except for an elderly cat is apparently friendless, and on top of that she gets kidnapped by nasty fortune hunters who need a person of small stature to go down a slime pit to search for a legendary diamond! Geraldine Fitzgerald voices the principal antagonist, Madame Medusa, who, despite Miss Fitzgerald’s admirable hamming, is nothing but an inferior copy of Cruela De Vil! Her secret lair is not an old family mansion but a decrepit riverboat, and she keeps a pair of alligators as pets! (The gators don’t talk, which is odd considering almost every other kind of animal can in this picture!) Altogether, it’s another case where the backstory of how Medusa and her droopy-dog henchman Mr. Snoops began their odd partnership, and how they became aware of the huge pirate diamond they’re searching for, might well have been more compelling than the far end of the tale we're being shown!
Bernard and Miss Bianca’s love story works about as well as you’d expect it to between those two actors, and between those two characters! Familiar voices are present and accounted for in, and helpful to, most of the other characters, like John “Herbie Rides Again” McIntire as Rufus, and perennial hayseed Pat Buttram as the corn likker-drinkin’ swamp rat Luke! While it has moments of charm and humour, and best of all a queer swamp-Gothic weirdness, it’s unquestionably a minor work, and some extra labouring over the story would have been much appreciated! I give The Rescuers one and a half proto sea-doos!
Posted by Burl at 00:28