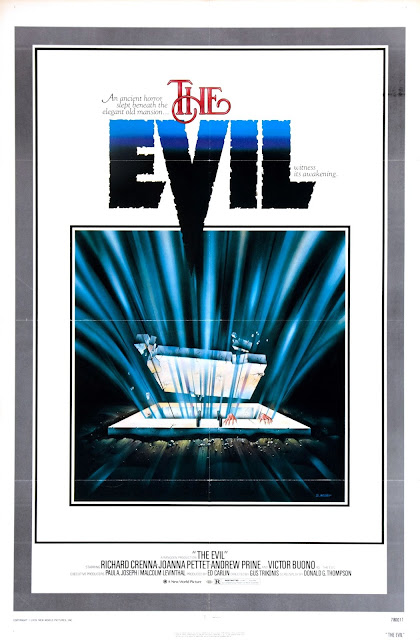 And a-BOO, it’s Burl, here to review a haunted house picture! Ha ha, this is the type of horror picture perhaps – perhaps – most likely to actually give me chills! I’ll tell you, when a subgenre can boast movies like The Haunting and The Uninvited and Legend of Hell House, and even The Changeling and Burnt Offerings and The Amityville Horror, you’ve got to admit it has a certain power! It works on me, anyway!
The Evil is another of those kind of movies, a low-budget iteration, sort of silly at times, but still occasionally effective! Richard Crenna from Summer Rental stars as CJ, a dedicated rationalist, a therapist by profession, who decides to start some kind of clinic in the biggest, creepiest mansion he can find! And I’ve got to give the filmmakers a great deal of credit here: they found themselves a top-flight location for their purposes! Ha ha, the house – it’s so huge, is it even a house? – is a sprawling estate with plenty of creepity potential, along with an appealingly eerie backstory!
CJ’s ex-student and great buddy is played by Andrew Prine, well-known from Grizzly and many other genre works! He looks a bit like a handsome Frankenstein Monster in this movie, ha ha, and ends up circular-sawing off half of his hand! But that doesn’t actually seem to bother him as much as it would have bothered me! Anyway, I’m getting ahead of myself! CJ’s ladyfriend is a sensitive type, and so sees the shade of the house’s original owner beckoning at her and pointing emphatically at his oversized special secret diary! It of course contains a vital clue on what to do… about The Evil! Ha ha!
The house, having already incinerated its requisite muttering caretaker, first locks in then sets about terrorizing, batting around and fatally boo!-ing the team assembled to tidy up the old pile! Some are electrocuted, others savaged by a hound or sucked into a mire! (Ha ha, shades of Amityville 1992: It’s About Time!) The house evidently enjoys clacking its shutters, and this it does a number of times as the characters try to figure out what’s going on! Finally CJ remembers about a creepy iron door he unearthed in the basement and removed the key of! Down into the sulfurous pit they go, only to find… Victor Buono!
Ha ha, you got that right! Buono, sporting an ice-cream suit, sits on a throne and insults, belittles and gives Excedrin Headache #9 to Crenna! But the mystical key with which the nefarious Buono can be locked back into his pit also serves as a weapon in the right hands! Ha ha, I had to laugh at the little coda, where the two final escapees emerge from the house after their ordeal, get into their car as fast as they can and peel away! That’s what anyone would do of course, but it just looked funny to see it enacted so purely!
It’s not a bad little picture, in the end, but not that terrific either, and opinions vary greatly on the effectiveness of the Buono segment! For some it completely deflates whatever atmosphere the previous seventy minutes managed to gin up; for others it’s a camp masterstroke that sets the movie apart from such contemporaries as, say, The Nesting or A Name For Evil! It may go either way for you, or it may go both ways, which is sort of how I feel! It drains the movie of its tension, sure, but at the same time individuates it!
I liked the picture less this time around than on my previous viewing many years ago, but I’m still not unfond of it! The cast is fine, the house is grand and there are some eerie moments, if not enough of them! (The same scriptwriter’s Superstition was a more effective take on similar material, as I recall!) On balance I think The Evil has just barely earned two circular saws! Ha ha!
Posted by Burl at 12:53