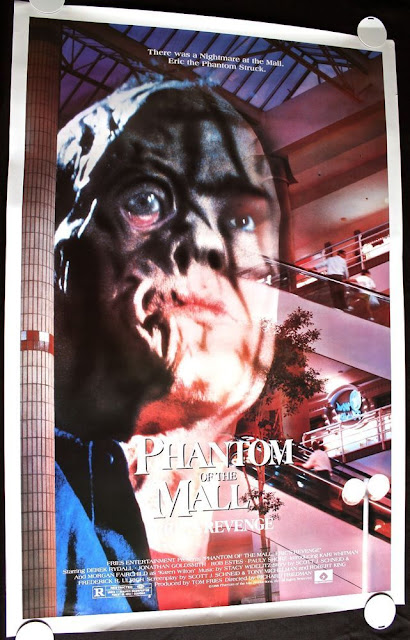 Booga-booga me with a spoon, it’s Burl! Yes, ha ha, I’m here with a review of a 1980s mall picture for you, and you know what that means! Valley Girls! Well, ha ha, not really, since they were seven or eight years passé by the time this picture was made, but you can be sure their successors are present and accounted for in this mall!
As you can surely tell from the title, Phantom of the Mall: Eric’s Revenge is a Phantom of the Opera update, and I’m pretty sure it’s set in the same mall as Fast Times at Ridgemont High and Chopping Mall, and it looks awfully like that mall they used in Commando too! Ha ha, maybe it’s just that all 1980s California malls look the same to me!
I won’t give you the plot in much detail, because, ha ha, that would waste all of our valuable time! Be it known, however, that a young lady who takes a job in a new mall has many flashbacks to the times a year ago when she was keeping company with her true love, Eric! But then, ha ha, a horrible housefire kills Eric’s family and purportedly him, although not really because he’s now got a puttyface and is stalking the back rooms and ductworks of the new mall – the very same new mall within which his one-time inamorata is employed!
Well, from then on it’s killings! The victims are mostly security guards to begin with, so nobody really notices! Ken Foree, back in a mall again a decade after Dawn of the Dead, is the only one sharp enough to be aware of a sudden decline in the mall’s heretofore robust population of perverts, peeping toms and general scumbags! Somehow, even when the mall owner’s astonishingly delinquency-prone son is trapped screaming all the way up to the top of an escalator where his neck is snapped like a cannoli, nobody sees a thing!
Our young protagonist has several pals, the goofiest being Pauly Shore, the comic actor best known for his role in that pregnancy drama For Keeps! She also has many enemies, principally the killer arsonist who originally set Eric’s house on fire – he’s played (I believe) by Gregory Scott Cummins, the star of Action U.S.A.! And Tom Fridley from Jason Lives plays the aforementioned mall owner’s son, who was so nasty he reminded me of the customer who enrages Dick Miller at the beginning of Starhops! And then there’s the town mayor, a role essayed by Morgan Fairchild from Deadly Illusion – we don’t know if she’s friend or foe for most of the movie, but, giving it away here for just a second, she’s foe! So naturally she gets tossed off a balcony and impaled on some kind of pointy sculpture! Ha ha! It’s just like what happens to that lady in Mausoleum!
When he’s not murderizing people, Eric is listening to “Our Song,” the tune he and his young ladyfriend unaccountably loved, and which is the most horrible song imaginable! It gets played and replayed until your ears want to fly south, and frankly it’s probably the real reason Eric went homicidally banana-monster! I have to say, that terrible song really lets the movie down!
Otherwise, for one of these things it’s not half bad! It’s not great either, of course: it’s never scary or suspenseful, and the romance part, a critical element to any phantom picture, falls flat! On the other hand, it gives us a lot of nasty characters to boo and their murders to cheer; and there are a few Special Makeup Effects here and there, including Eric’s puttyface; and I liked that it really created a feeling of community within the mall, even if it’s a dysfunctional community populated entirely by jerks and airheads!
On balance it’s a generally enjoyable friton-bleu, though hardly essential! I was glad to have finally had the chance to see it! I’m going to give Phantom of the Mall: Eric’s Revenge two exploding eyeballs! Ha ha!
Posted by Burl at 11:29