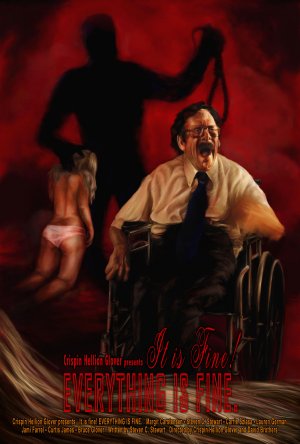 Well hey-and-hey-howdy, it’s Burl here, reporting on a marvelous art film made by a young actor – well, a young actor and his friend! I’m talking about the second picture in Crispin Glover’s It Trilogy, It is Fine! EVERYTHING IS FINE. Of course we all know Glover as an actor in pictures like Friday the 13th part 4 and Rubin & Ed! This picture was made by Glover and a fellow called David Brothers, and they shot it in Salt Lake City around about 2001! Ha ha, it wasn’t finished and released until 2007 though, but that’s low-budget filmmaking for you! I, Burl, can relate!
It was directed by Glover and Brothers, but the story comes, according to an opening title, “From the mind of Steven C. Stewart!” Steven C. Stewart is, or was, a man in his early sixties extremely debilitated by cerebral palsy! A terrible illness! So everything was difficult or impossible for Steven, and speaking was an especial bugaboo! But he managed to write a script and act it out, even if his line readings aren’t always intelligible! A singular man, by all accounts!
In the opening scenes, Steven plays himself in the situation he’d been some years earlier: trapped not just within his body, but in an institution he hated! He falls out of his chair and is replaced there by a burly, completely unemotional attendant! But we are then cast into a gaudy crime drama, of which Steven, under the name Paul, is the central character! He embarks on a romance with a Fassbinder actress – one’s first clue that all will not go swimmingly – and displays an especial interest in long, straight hair!
When the lady refuses to marry him, he can take it, so far as we can gather! But when she muses about cutting her long hair, Paul can abide no more! He wraps his suddenly burly arm around the lady’s neck and administers the fatal chokehold that will become his signature move! Next he’s hanging out with the lady’s daughter, and she too is marked for a chokehold!
For Paul is embarking on a killing spree! He starts out like Walter Paisley from A Bucket of Blood – a picture I was strongly reminded of while watching this one – as a kind of likable nebbish, and progresses quickly to a maniacal slaughter fiend! And, ha ha, Paul sure puts the “sex” in “sexagenarian!” Long-haired ladies are constantly falling in love with him, and frequently having intercourse with him, and then they go and mention their hair and Paul crooks that ol’ murderin’ arm! He’s forced to deal out a few punchings and a brutal wheelchair-over-the-throat murder too! (All of this was extra-oddball for me, because Steven/Paul resembled with remarkable precision my neighbour Fred! Ha ha, dead ringers, really, though Fred hasn't got CP and is not, to my knowledge, a strangle-killer!)
Of course nobody ever suspects Paul, because how could a man with severe cerebral palsy be responsible for this carnage! We’re seeing it and even we don’t quite buy it! Ha ha, I don’t want to tell you the end, but it works very well at providing an emotional arc-completion to the film! In fact the whole movie, as occasionally oddball and pervy as it gets, and as mildly confusing when Paul is sleeping with and killing ladies we’ve only just met but he seems familiar with already, is executed with a strange and compelling charm, and a meaning! For we’re not just watching a story, we’re watching a man’s dark fantasies put on screen, and the man himself being given a most unlikely chance to act them out! It’s really something to see, quite frankly!
The picture was shot on gaudy colour 16mm, one of my favourite formats! Other than the nursing home seen at the beginning and end, all of it was shot on beautifully fakey sets, and the acting is variable and stylized! Glover’s father Bruce Glover, Mr. Wint himself from Diamonds Are Forever, plays a sleazy ex-husband, and he acts in such a way as to imply he took the whole thing as kind of a joke! But it still sort of works!
It’s a truly unusual picture, and possibly not for everyone! But I thought it was a marvelous accomplishment, and I’ve been thinking about it frequently since I saw it! Ha ha, it made me want to see the other two in the trilogy, though the third installment was still pending at this writing! But in the meantime I’d like to give It is Fine! EVERYTHING IS FINE. three belly-bandages!
Posted by Burl at 22:36

Email ThisBlogThis!Share to TwitterShare to FacebookShare to Pinterest
Labels: 21st century, drama, horror, oddball, saw it on the big screen